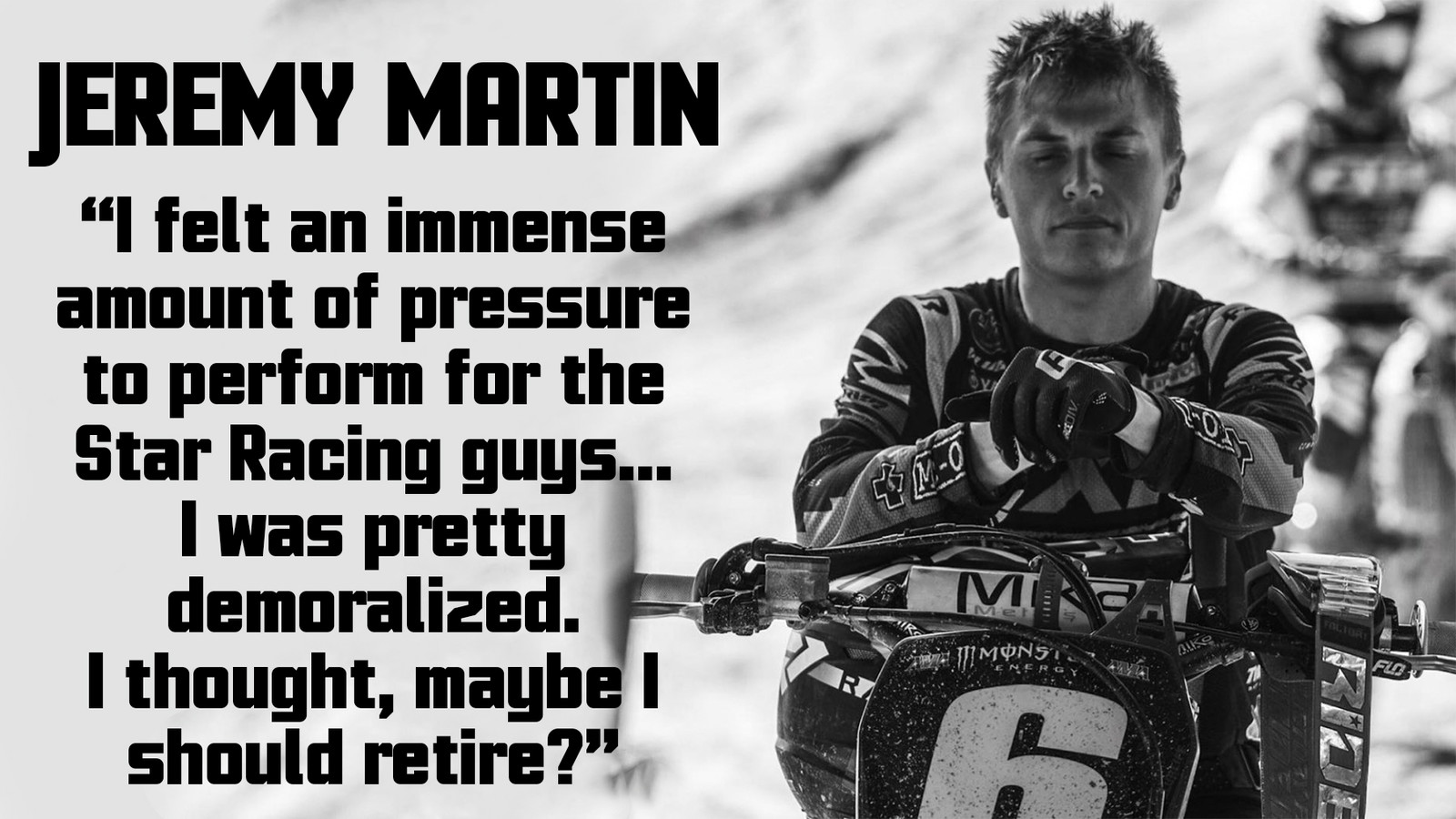 No rider is more ready for the 2023 season to kick off than Muc-Off/FXR/ClubMX Yamaha’s Jeremy Martin. He raced twice in 2022 and spent the rest of the year recovering from injuries. With his shoulder surgery behind him and a new team, JMart is ready to get back to his winning ways.

Jamie Guida - Vital MX: Jeremy, how have you been and what’s been going on?

Jeremy Martin: Dude, I just finished off about an hour session of riding here at ClubMX. We had the Phoenix Honda guys and Garrett Marchbanks and dude, it was a solid, solid day.

JMart: Yeah, I've worked quite a bit on it. I'm probably in the best cardio shape of my life right now. I cycled a ton. A month after surgery I bought the Zwift and then a KICKR trainer so I could go online in my basement, and I had my sling and a fan set up. And I just said, “You know what? This obviously sucks, we’re hurt, but we can still try to move forward and get in good shape". It's been a lot of fun. The shoulder's a lot stronger now. Every week that goes by, it just feels better and better. I'm excited about it.

Vital MX: Just to remind everybody, you hurt your shoulder in 2021, at Round One of Supercross, decided to stick it out so you could compete in that outdoors and then broke your wrist at Ironman. 2022 started with a fourth in Minneapolis, second in Dallas, and then you had a practice crash, and everything fell back apart.

JMart: It was pretty tough. My shoulder almost came out at Dallas when I ran into the back of Jace (Owen) in the mechanic's area. Thank God it didn't. I finished second and to be 100% honest with you I shouldn't have been riding as hard as I was during the week. I had an awesome day on Tuesday before Daytona, rode Wednesday and then was supposed to do Press Day. I felt an immense amount of pressure to be better and to perform for the Star Racing guys. I shouldn't have been going that pace and I made a mistake. To be honest, when I went down, I was pretty demoralized by it. I thought maybe I should retire; you know? I had some big injuries, boom, boom, boom in a row. I thought maybe the body's just not cut out for taking that hit anymore. I really questioned myself. I think that's ultimately what led me to Club. And I just wanted a change. I wanted to work on technique. I wanted to find the fun in the sport again, because for me, I was starting to not enjoy being at the track and riding my dirt bike. I had bad technique. Not to say my technique is going to change in six months or whatever going into 2023. But I just wanted something different.

Vital MX: That answered my next question. I was curious as to why Club. I was going to ask you if anything happened at Star that made you want to step away.

JMart: My relationship with Star, I have an immense amount of respect for those guys. They’ve won at least seven championships in the last, what, basically seven years, it seems like. They've been the powerhouse, dominant team. But I felt with the injuries that I had I should have taken the time back when I got landed on by Stilez Robertson. I should have said, “Stop, get fixed up”. To do this sport at the top level you are going to crash. You should probably be 100% and put yourself in the best situation to be able to get up and take that and get going again. I had two massive injuries I was dealing with.

Vital MX: Your career has been the highest peaks or the lowest lows. It doesn't ever seem like it's in the middle.

JMart: You're definitely right. I've had some crazy highs and some crazy lows for sure. If I'm being honest, I'm probably in one of the lower parts. I'm starting to build back up. I'm starting to feel good on the bike. I feel really fit. So, life's getting better. But I've been in a big low point from a results perspective, and I look forward to the challenge of getting up every day and trying to make the best of the season. We want to win and if we can win a championship, great. But you have to finish every round this year. That's a big goal for me.

Vital MX: You're staying on the same Yamaha platform, but Star has a much bigger budget, and possibly a lot more opportunity to try different parts. What are you noticing different about the bike? What suits you?

JMart: I'm sure Star has more budget, but I'm really impressed with this ClubMX team. They built a brand-new race shop and as far as transmissions and engines and timing chains and everything like that, it's on the same rotation as what Star would be. The other perk is the facility. We have four Supercross tracks. Brandon (Haas) trains us during the day and then he'll go out and make a change. He can build whoops by himself. He can do everything. Since I've been here, I've rode two different layouts already. He just built a third Supercross track, that's all brand new. We're going to ride that on Thursday. That's a unique opportunity and not too often can you say a team owner can train you and can also build badass tracks that are really similar to Dirt Wurx.

Michael Lindsay – Vital MX: Is it difficult watching the next generation of riders already winning and moving on to the 450s while you're working on getting your career back on track?

JMart: The hardest thing for me is to go out there and be able to compete and to get arm pump and not get a good result. It’s hard sitting on the sidelines recovering from an injury for six months and then everybody else is getting better. They're able to compete and at least try. That is a massive thing that I've been struggling with. I want to compete whether you win or lose. I like the thrill of the challenge. You're starting to see a bit of a different trend in the riding styles, a lot more feet on pegs, standing a little taller in the ruts. It's the next generation type of style. I think that watching the races, there's still something to be learned. So, I've watched every race and of course Troll Train was out there hammering this year. Big supporter of him and Eli and always trying to learn and get better.

ML - Vital MX: Speaking of Big Al, how's it feel to come in and replace your brother? "Get on out of here, Big Al, I got this".

JMart: Yeah, yeah. Get that short little troll out of here so I can get in here and show them how it's done. 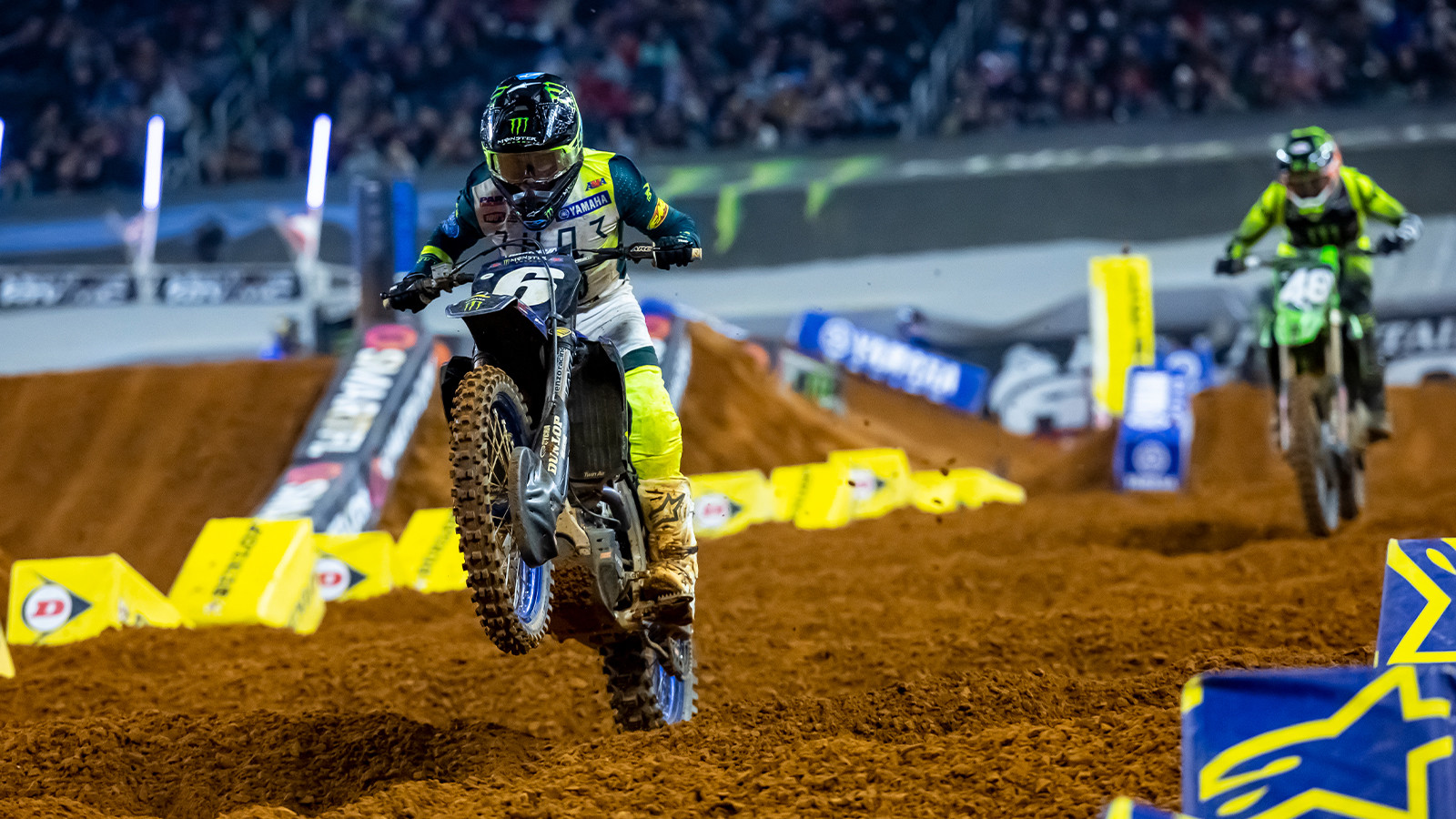 ML – Vital MX: Before your big injury at Muddy Creek when you were on Geico Honda, was there a 450 deal or option on the table?

JMart: It was looking pretty dang good that I was going to have a one-year Factory Honda 450 slot at that time. I was pretty dominant. You have to think, I won two Supercross titles. I had a great relationship with the Factory Honda guys and I was battling for the championship with Plessinger. You hate to look back in the past, but I believe I would have had a factory 450 ride.

Vital MX: That had to add on to the pain and suffering of that time period.

JMart: Everybody has a unique career. The traditional way is you do a couple of years in the 250 class and then you move up. As you're seeing, it's a little harder to land a 450 ride for guys now than then. I've had some injuries, but I still appreciate having a ride, being able to compete. I'm the older guy in the class now, but I still love what I do.

ML – Vital MX: Did you ever talk to Justin Cooper while you were at Star about Muddy Creek?

JMart: No, we never discussed that. I respect Justin, he's a tremendous athlete, but that was some of the frustration, that it was never talked about initially. After it happened, we never had a one-on-one conversation ever. It's in the past now and I've had many injuries since then and you have to move on.

Vital MX: Talk about all your teammates. You have Marchbanks, Phil, Enzo Lopes, etc. How is it having those guys to work and train with.

JMart: The cool thing is, we’ve got the Phoenix Honda guys, you've got all the Club guys and then you have other guys riding too. You have this wide variety of people that you're riding with. And never have I ever rode the test tracks and it felt more like a race day simulation experience for me day in and day out. I'm used to riding the same line, and it's predictable with two or three guys. By the time you finish up here, I'm like, “Damn it, man. I'm glad we're done”.

Vital MX: What's different about how you guys are training compared to what you were doing with Star? You had a lot of fast guys there too.

JMart: There were some top guys, but last year when I was at Star, there was a good group of guys that were riding, and the track would break down and get rough. When the West Coast took off, they went out a month early and then it was just down to Levi and I riding the two tracks. It was just very predictable. Not that that's a bad thing, But you get to race day and it's so rough in practice and the main event that you're not quite used to that because you're used to riding your test track lines.

Vital MX: With a couple outdoor championships and getting a little older, is the 250 Supercross Championship still a major priority?

JMart: If we can get ourselves a Supercross Championship in the 250 class, that'd be awesome. At this point, honestly, let's make a season, right? Let's be the best Jeremy Martin that we can be and let's line up for every round and be competitive and then we'll let the rest of that work out. 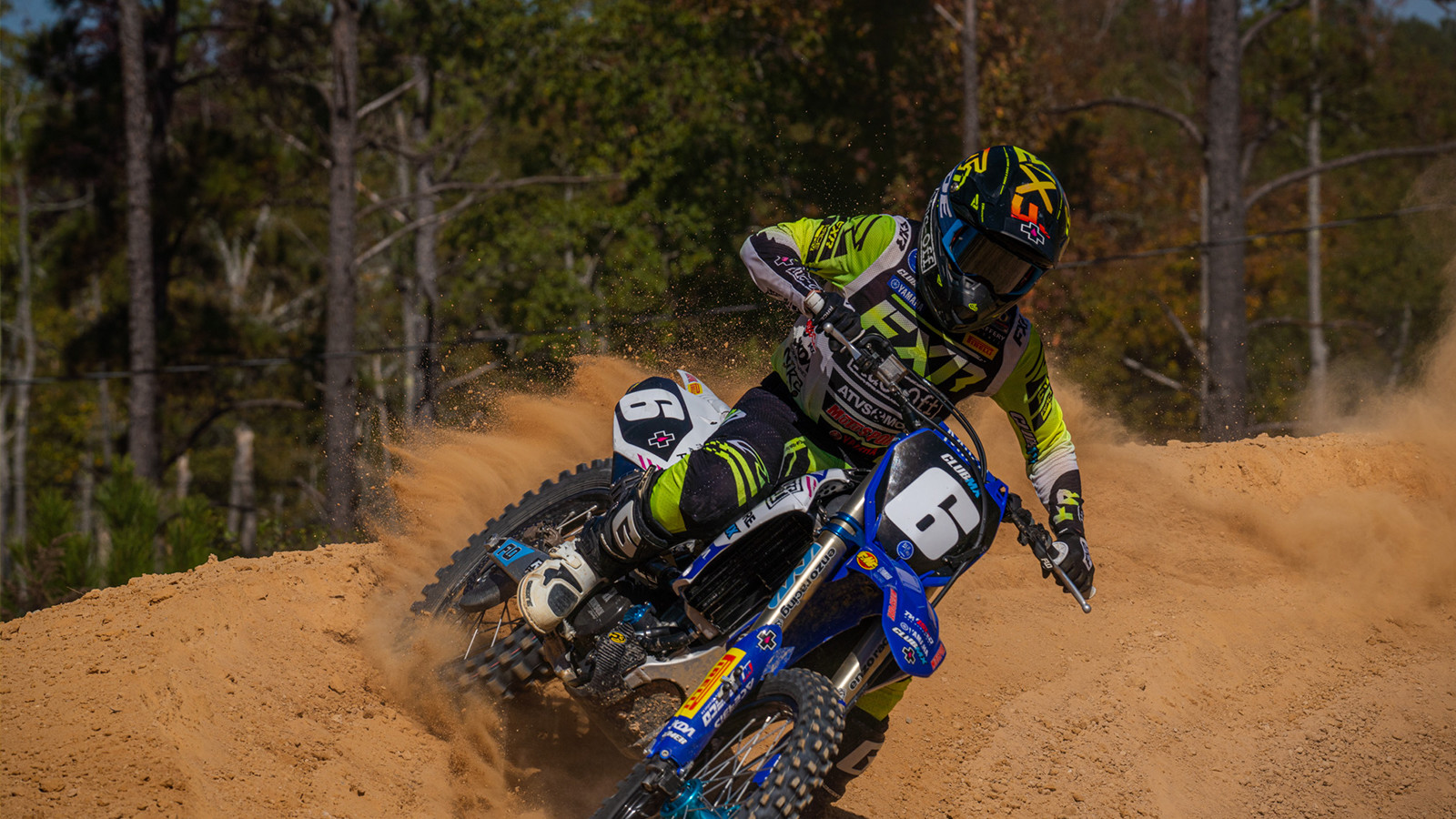 Vital MX: I saw on your Instagram not too long ago, you recently did a pro mountain bike ride. It looked awful. Tell me about it.

JMart: I tell you what, I did a little vlog on it and riding dirt bikes is a lot more fun, but it's pretty cool. I love to mountain bike, and I love to push myself to go beyond the limit. And that's probably why I ultimately hit the deck a couple of times in the last couple of years, because I wanted it so bad, I pushed too much. But man, that was a muddy race, 40 miles and a lot of suffering and a lot of cramping there at the end. But after I crossed the finish line, we had ourselves a big old fat burger and some fries and a milkshake, and I was living. It was about 2 hours and 22 minutes.

View replies to: "I Felt an Immense Amount of Pressure to Perform for the Star Guys" | Jeremy Martin on Racing Injured

"Little Changes Get Us Riders Super Excited" | Shane McElrath on the WSX, SuperMotocross, and More

Jeremy Martin and Alex Martin Duking It Out at ClubMX!