Since its introduction in 2011, the KTM 350 SX-F has been continually revamped in an effort make it a legitimate competitor in the 450 class. When I first rode it in 2011, I didn't really consider it something I'd attempt to race in that class, but, it still put a small smile on my face. Fast forward a few years, and KTM has made some large strides in upping not only the horsepower, but also the torque the middleweight machine puts out. While I'd still personally rather race a 450 against a 450, I have to admit that the 350 is possibly the best all-around four-stroke on the market. 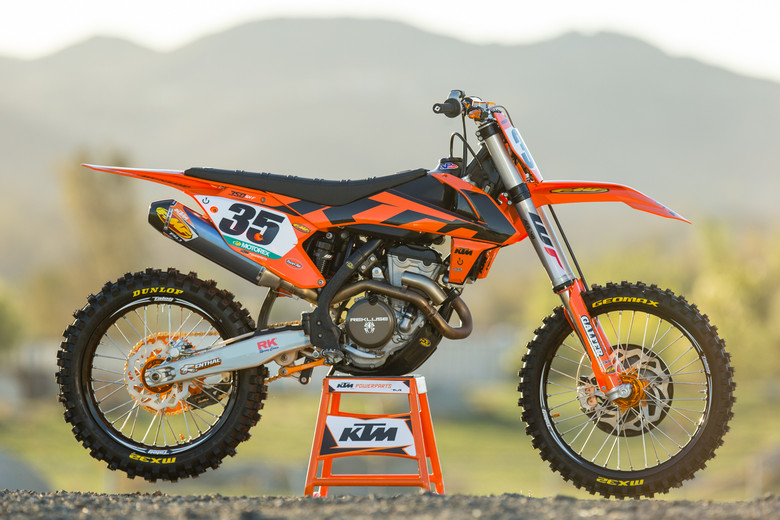 With that said, our latest project bike involves taking a 2016 KTM 350 SX-F, spiffing it up with the help of KTM's own PowerParts, and throwing a few extra upgrades at it to help out the fun factor for those after work and weekend warriors out there. 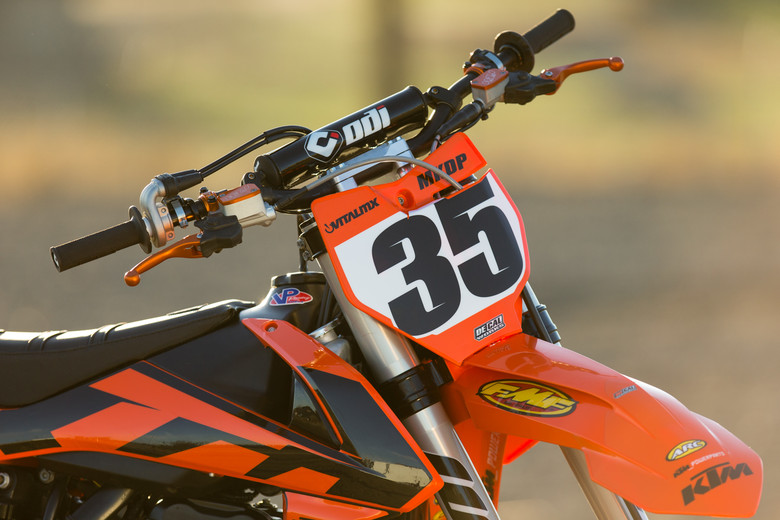 First up in the looks department; we grabbed a hold of KTM's own hard parts catalog (known as PowerParts) and went on an orange buying spree. On the list of things to grab were some orange ARC folding aluminum levers, a set of Billet caps for the brake and clutch master cylinders, along with a pair of CNC rotator clamps for the perches themselves. We also went with all orange plastic, orange Renthal sprockets, and a long-tipped shift lever. Most of these controls were attached to ODI's CFT handlebars, which go along with the ODI Lock-On grips that the KTMs are now coming with in stock trim. 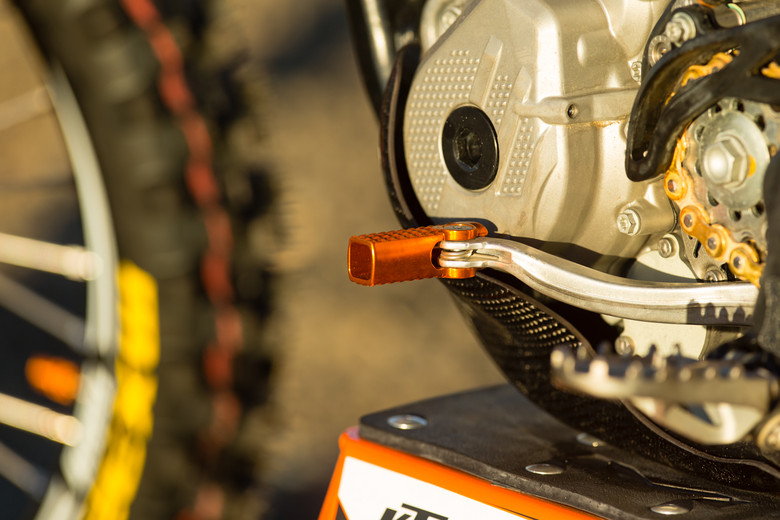 Next, DeCal Works whipped us up a set of OEM-based graphics. The idea was to keep a simple look, close to stock, while adding in a bit of flair where needed. From a distance, the bike almost appears to just have numbers and trick parts, but the closer you get the more you see how the clean design comes together. 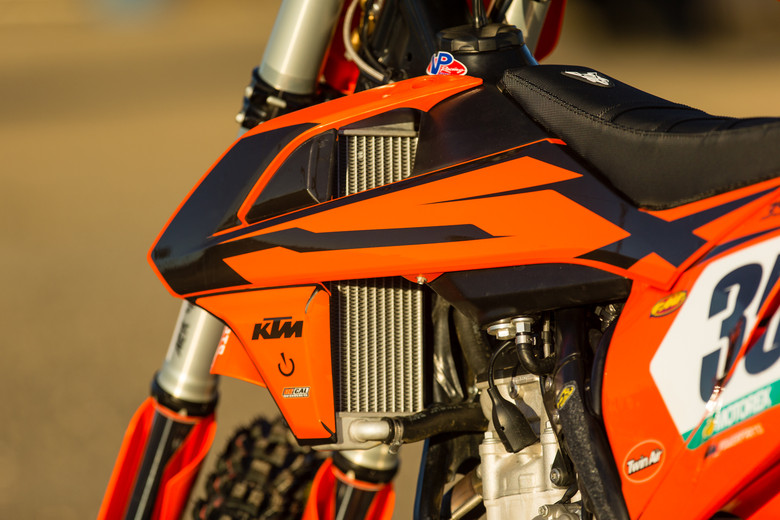 Over the past few years, KTM has really taken a beating over the 4CS forks. Instead, we decided to skip the modifications and jump straight to WP Performance's new AER48 (air) fork. The newest offering, which we will see on production models for 2017, solves many of the complaints from the current fork. Most notably, the AER48 has a much more progressive feeling with better bottoming action, while also keeping a more supple and active initial feel. The fork is also fairly easy to set-up, as it only has one air valve which sets the inner and balance chamber at the same time. 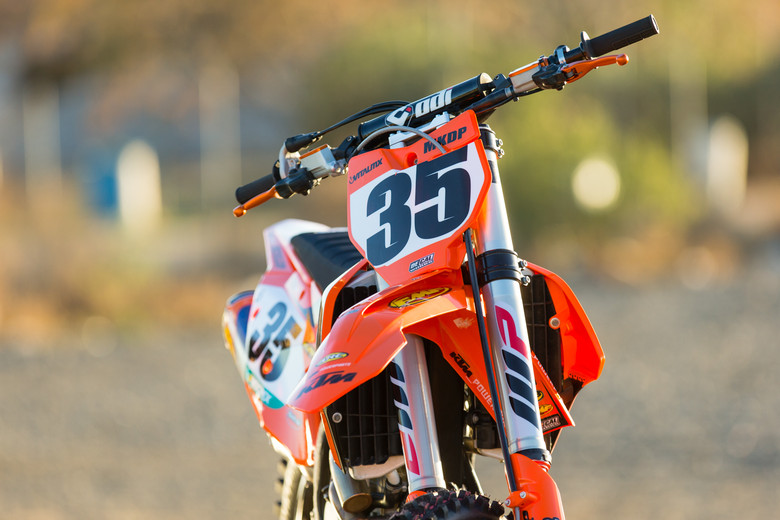 Performance-wise, we kept things simple with an FMF 4.1 RCT Ti/Carbon slip-on, a Rekluse CoreEXP 3.0 auto-clutch, and some VP T4 fuel. Why just a slip-on? We asked around KTM and were told the stock head/mid-pipe produced more bottom-end, while the FMF unit was better for mid-to-top. Considering the slip-on already cleaned up the mid-to-top, we decided it was best for the budget to stick with the stock header, along with making the bike a bit easier to ride overall. As for the VP fuel, it's one of VP's lowest price, entry-level fuels, which adds a bit of performance and crispness to the throttle response. Along with taking away the fear of dealing with some bad pump gas clogging up an injector or the fuel pump. 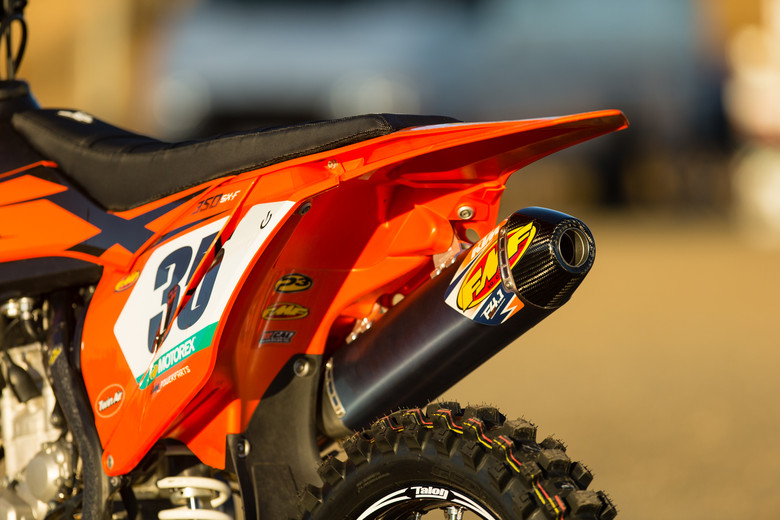 As for the clutch, Rekluse's auto-clutches have come a long ways, and CoreEXP 3.0 just feels so dialed in. For the everyday guy, there are so many positives with it and just makes riding that much more fun (the whole goal of this bike). 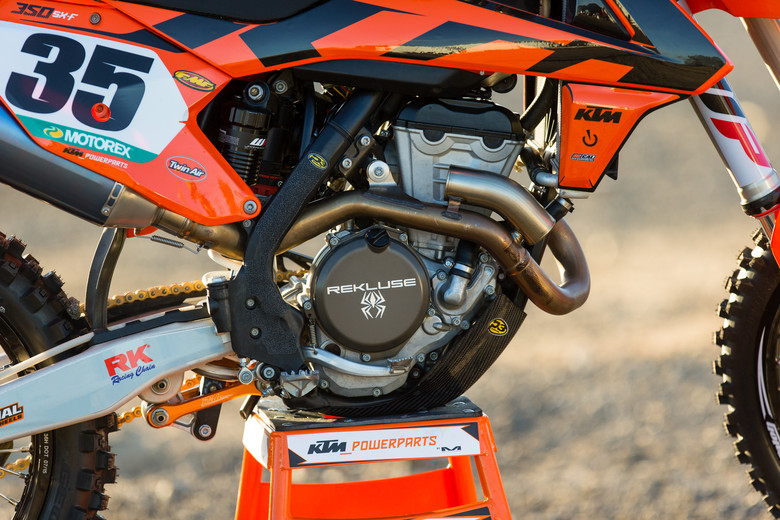 Protection-wise, we utilized P3 Composites, who works closely with KTM's Off-Road team, BTO, and a few other orange-supported teams for their carbon goodies. Their skidplate fits like a glove and after a few rides still has a clean finish. Another bonus was their front brake disc guard that the BTO team runs, which can support up to a 280mm rotor (more than enough to support the 270mm Galfer rotor) and takes the place of one of the stock wheel spacers. 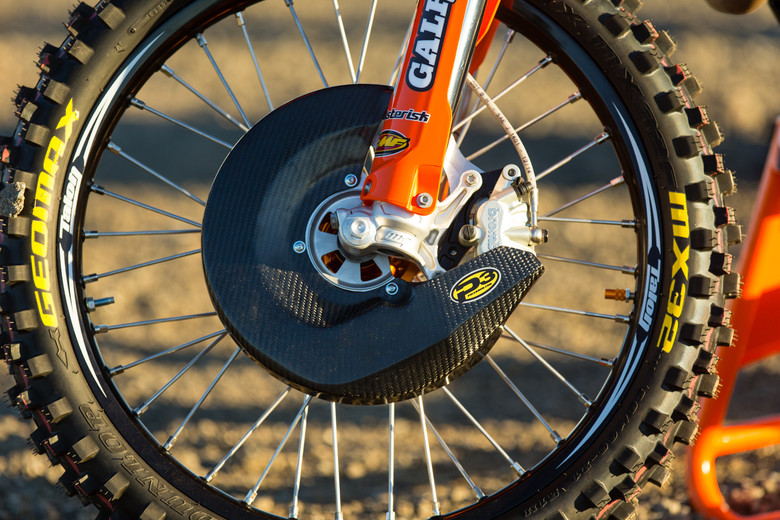 We also worked with Ride Engineering for a few improvements on the bike. One, we added their Honda steering damper kit (which many KTM and Husqvarna team riders use). This isn't as much about high-speed stability, as for settling the front end down in corners so it twitches less, and stays on course with the rut. We also threw on their bar mounts with a one-piece top clamp that resist twisting in the vent of a crash. Even a tip-over in the wrong place can't tweak stock mounts badly enough to really ruin your day of riding. 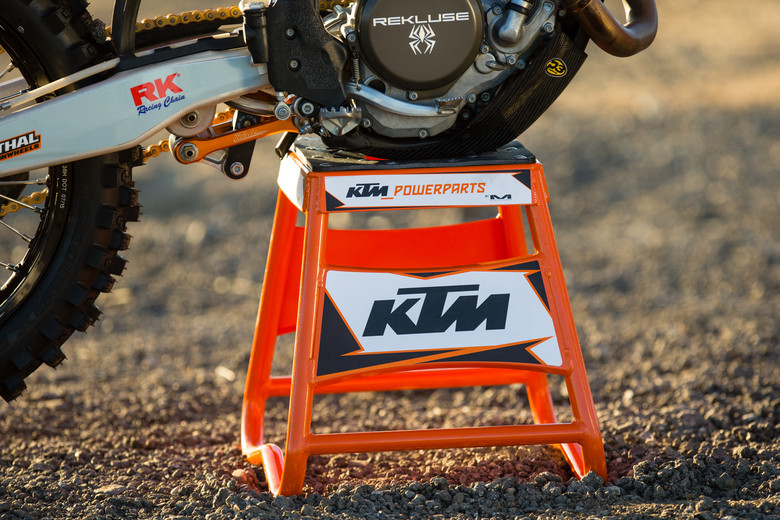 Last up on the list from Ride Engineering was their 1.3mm longer rear link arm. This was used in place of the stock linkage to help lower down the slightly tall-feeling rear end of the 350SX-F, plus move the shock a little deeper into the linkage ratio. This creates a stiffer initial feel, making it hold up a bit more in the stroke and feel more speed sensitive. 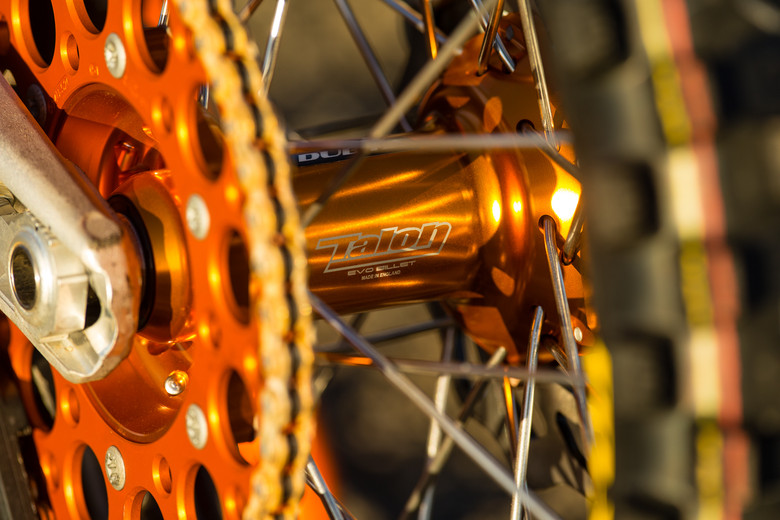 The final two pieces to the puzzle were the wheels and seat. We added Dubya's Talon EVO wheelset, as these wheels perfectly fit our needs. They're tough enough to handle weekend warriors, look great with black rims and orange anodized hubs, and saved us a few dollars when compared to the higher-end options. Of course we needed to slap some good tires on the fresh wheels, so to keep with the easy-to-ride idea we went with arguably the best all-around moto tire on the market, Dunlop's MX32s, both front and rear. 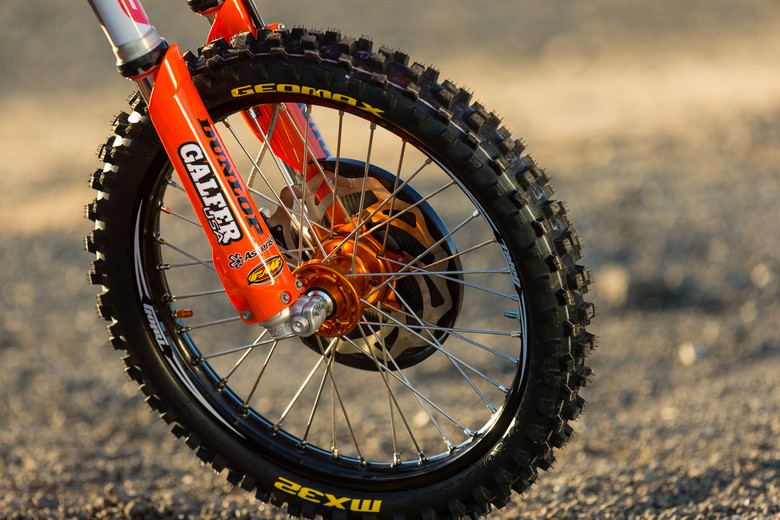 As for the seat, we wanted a ribbed gripper cover and contacted GUTS after learning about their new velcro covers. Yes, thats right, velcro. No more pesky staples, just strips of velcro material that sticks to the base of the seat, and a cover you stretch over and attach quite simply. But before we placed the cover on, we treated the base of the seat to some new foam. More notably, GUTS lightweight Phantom Foam, which is used by Geico Honda, Rockstar Husqvarna, Yoshimura Suzuki, RCH, and more. Even with the KTM's thin seat, we still trimmed almost two pounds off the bike and the new foam was honestly more supportive than the stock version. 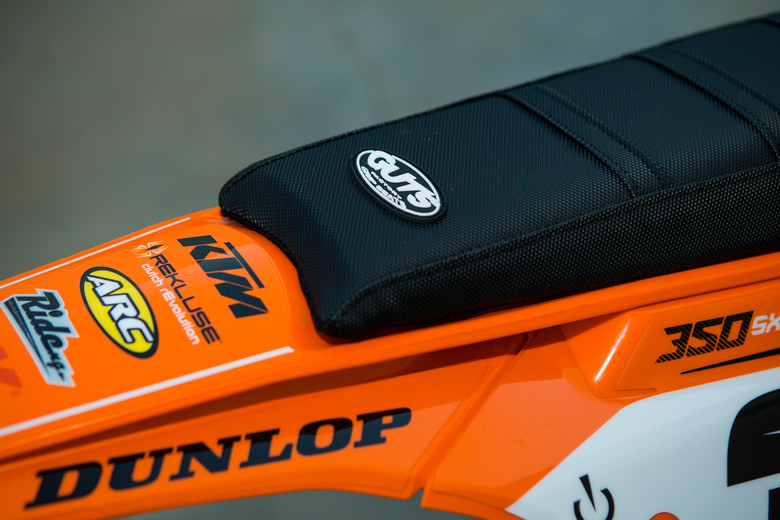 In the spirit of the build, we took the bike out in the afternoon (after work) and spent a great few hours just enjoying the bike. It reminded me that this 350 SX-F accomplished the main goal of riding, tiring me out from endless laps and putting a huge grin on my face. 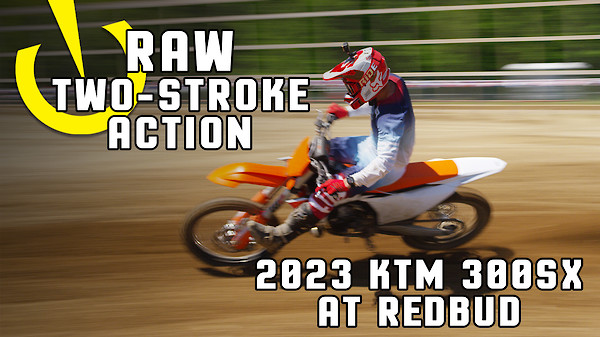 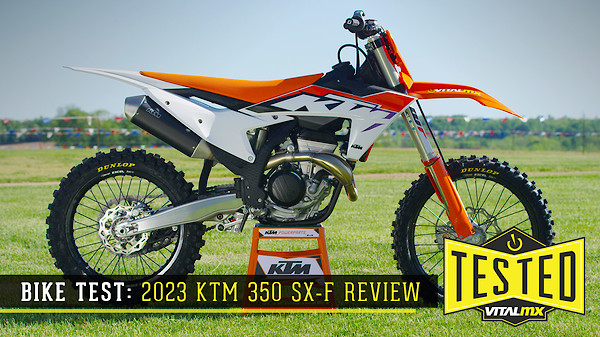 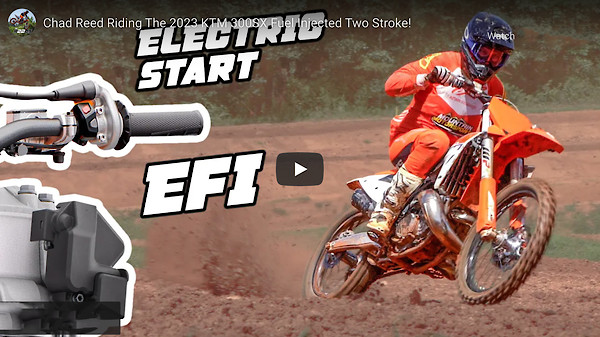 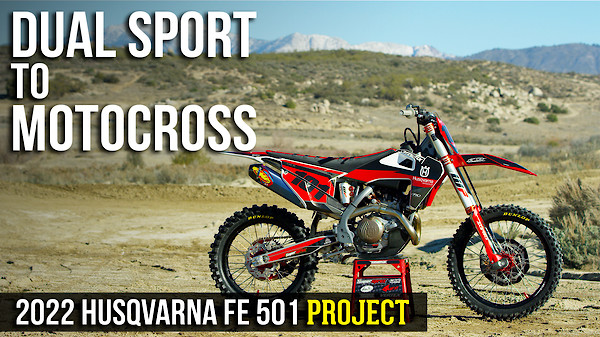 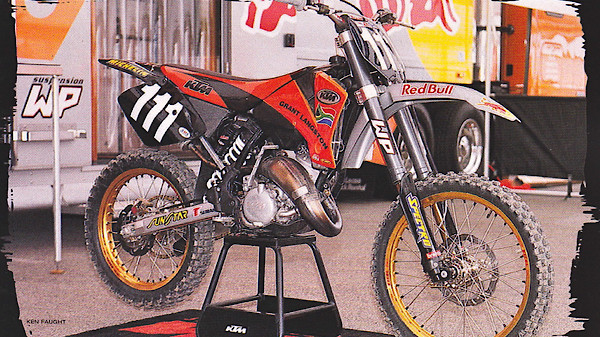