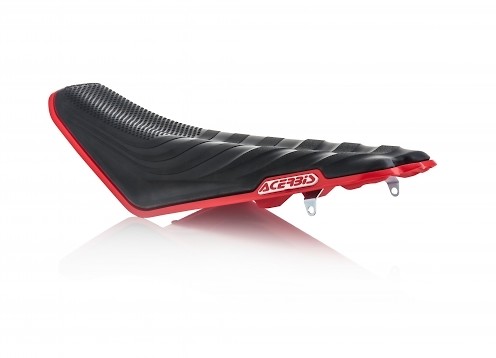 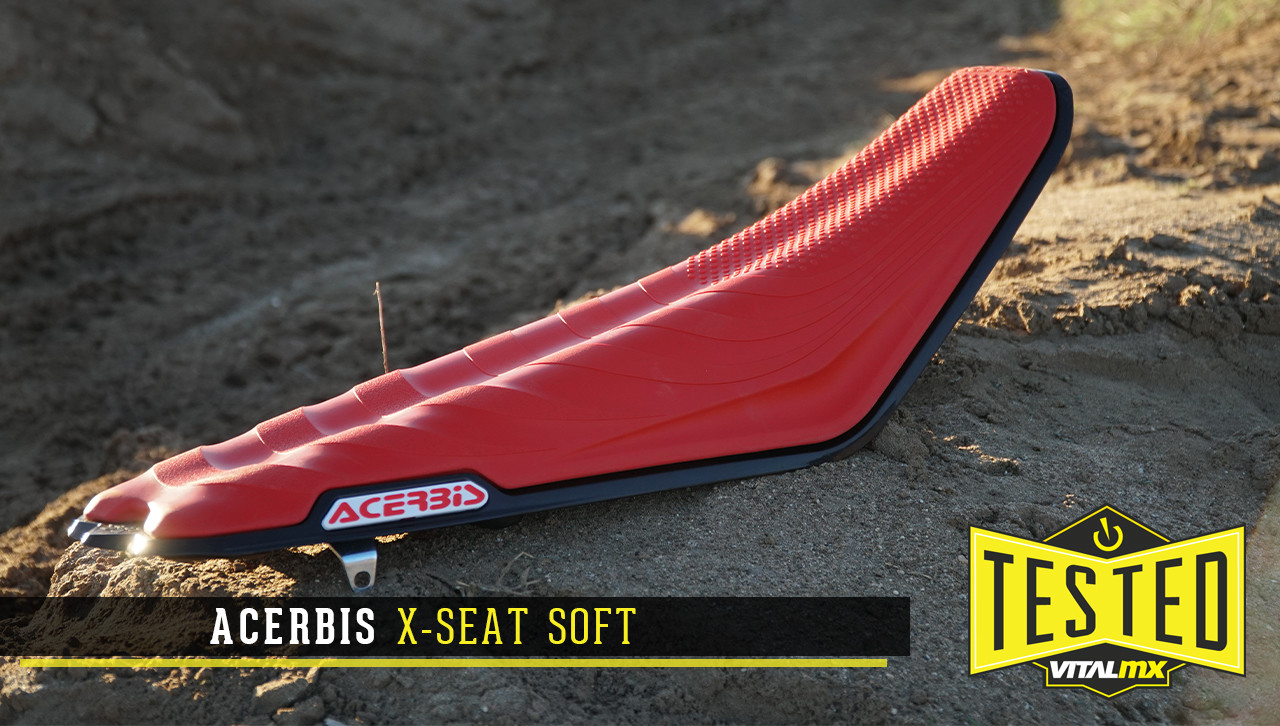 The Good
The perfect amount of grip, waterproof, firm feel provides less of a pocket that some soft stock seats can have.
The Bad
Heavier than stock, can't change covers because there isn't one.

A seat is a seat, right? All bikes have them and other than the grippy-ness of the cover and density of the foam, there isn’t much to them. But what about the shape? Acerbis X-Seat Soft for the Honda CRF250R has a whole different shape (and grip and density, for that matter) than any other seat on the market. 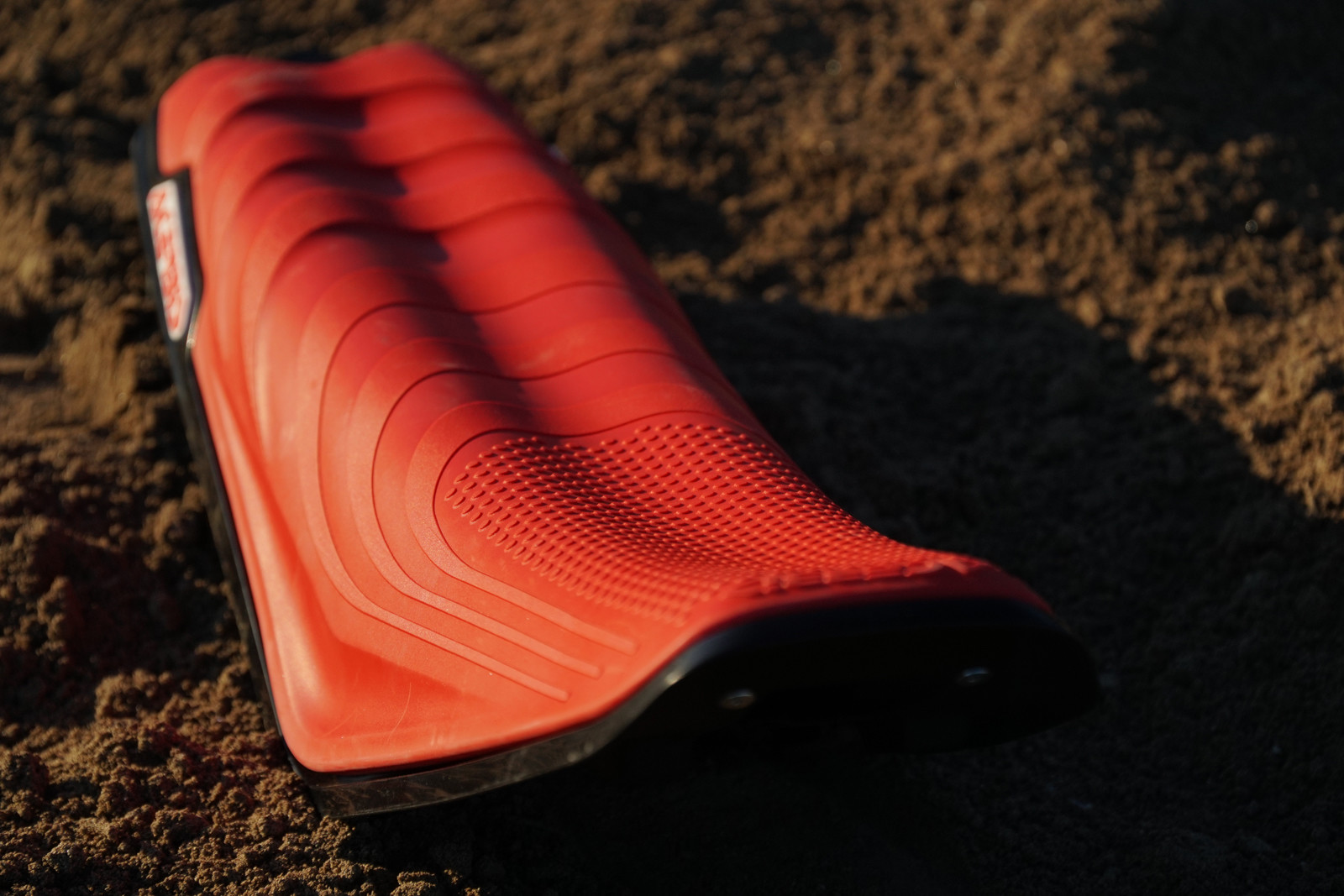 The look of the seat might not be for everyone, but I typically lean toward weird looking stuff and I like that it stands out. Overall, the construction is super burly - all the plastic parts are very rigid and thick and everything is well constructed. The red matches the Honda red perfectly. Also, the seat doesn’t have a cover, it is all one piece of foam.

One thing that I did notice before even putting the seat on is how heavy it is. The specs claim 1450 grams but weighing myself I found it to be about 1800 grams (3.96 pounds). For reference, the stock seat is about 1200 grams (2.64 pounds). That’s kind of a bummer because of how high the weight is on the bike. I think that comes from a denser, waterproof foam and a thicker seat base. 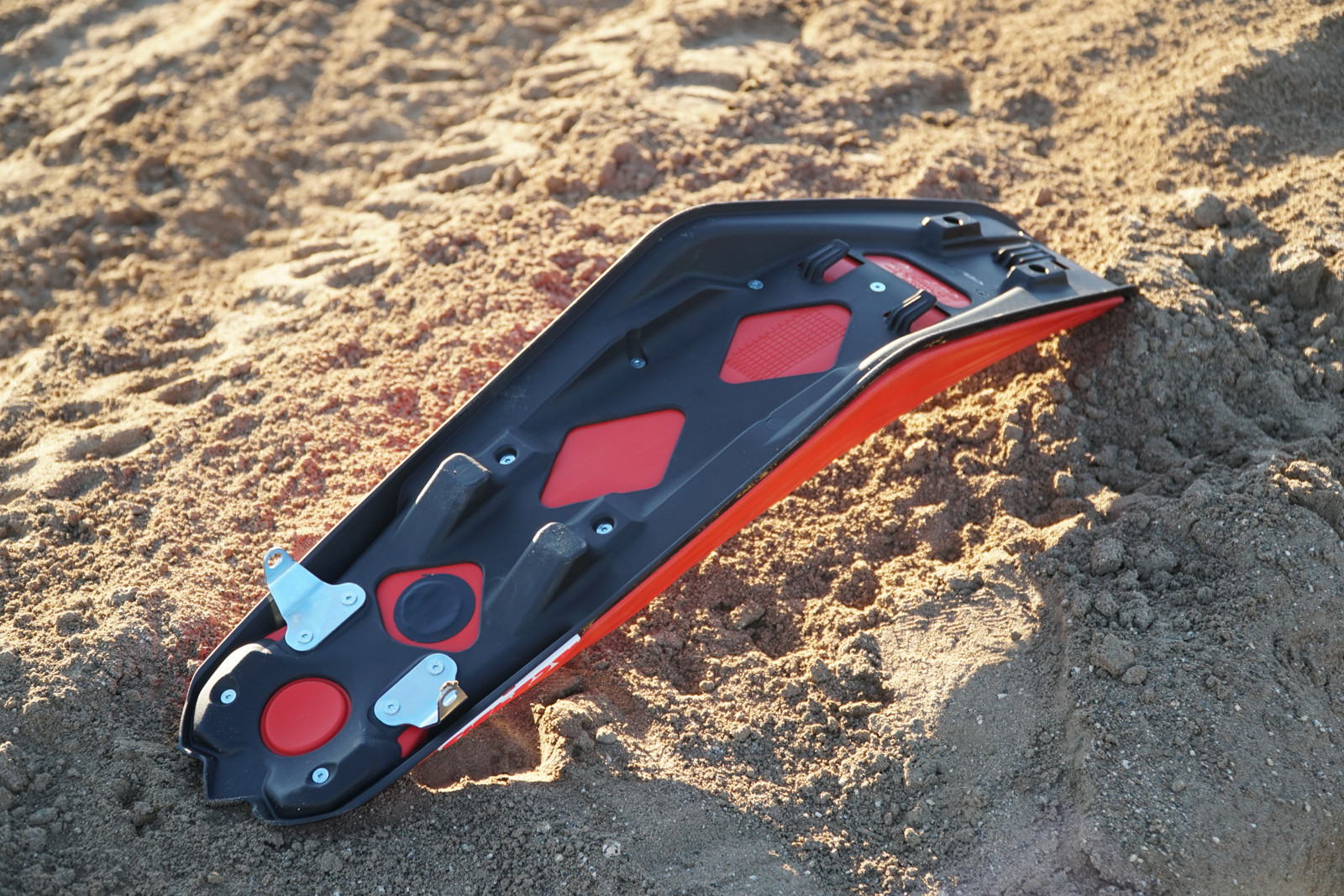 There is no difference in installing this seat than the stock seat. But, I did notice a little bit of play at the very front of the seat by the gas tank. I didn’t notice while riding at all, just when I put the seat on. 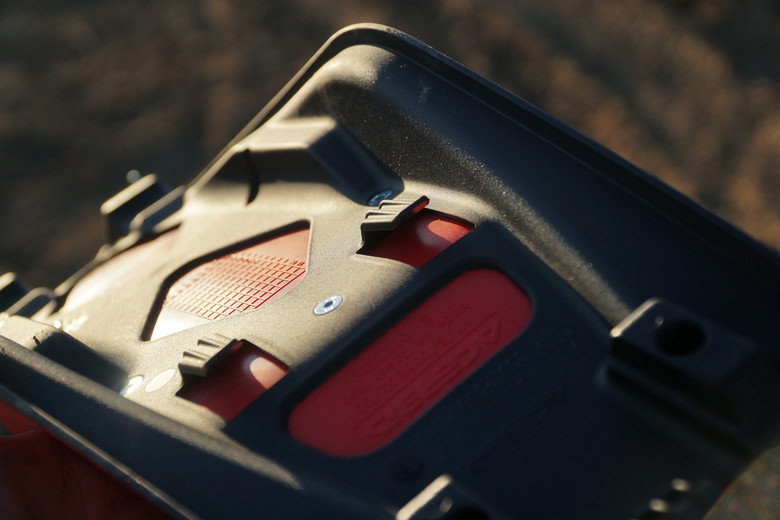 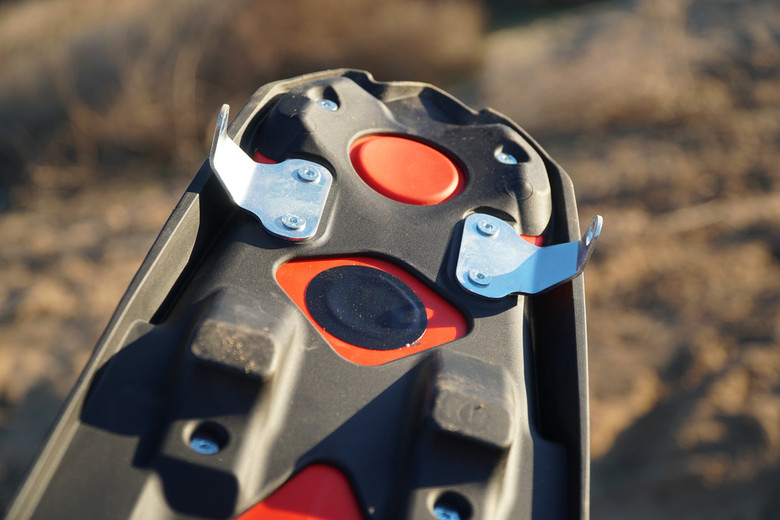 So what is the deal with the shape? I think the idea is that when you sit on the two ridges, they sort of squish down and offer more grip than a standard shape seat. When you first hop on the bike, you definitely notice a squarish feeling under your butt. It’s not like you feel the channel, but it just makes the seat feel a little more flat than rounded.

Once out on the track, I mainly noticed two things. The first was extra grip. I felt very planted and secure on the seat and wherever I put my butt, it stayed there. But it isn’t as gnarly grippy as those gnarly diamond-shaped gripper seat covers out there, which I find to be a good thing. The X-Seat is right in that goldilocks zone where I feel secure but also able to slide around without my pants getting velcroed to the seat. This let me slide forward in a corner, stay there, and then slide back after the corner. 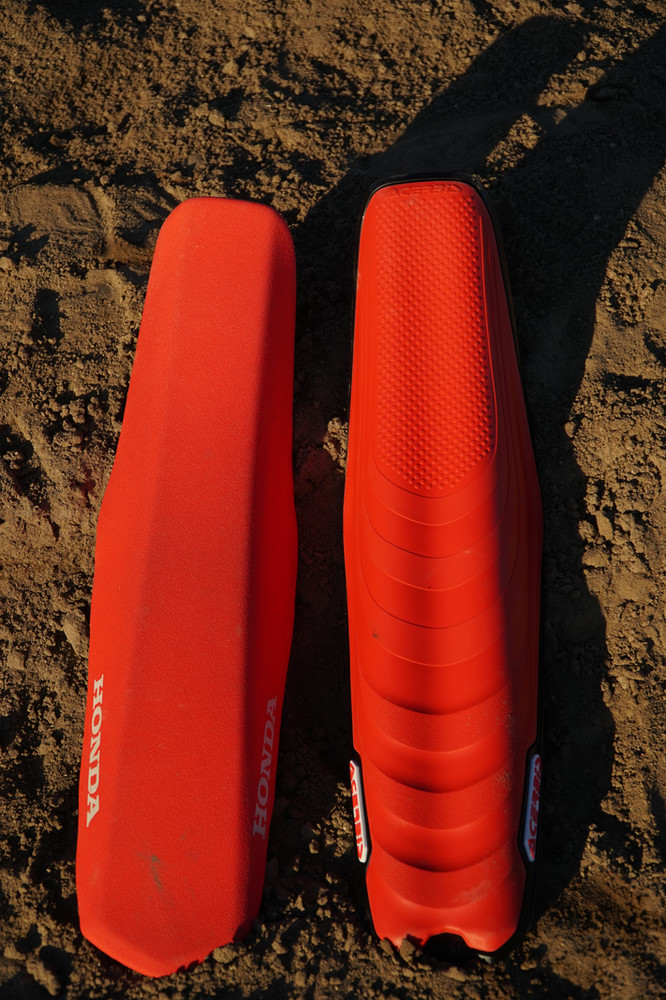 The second thing I noticed was when turning, the two ridges sort of acted like a guide on where to sit on the outside of the seat. Just like a seat hump on the back of a seat is more of a guide rather than to keep a rider from sliding off, I would put my butt right on the center of the side ridges and it was a good tactile guide on where I should be when a turn called for leaning the bike underneath me.

This is the Soft version, which is still pretty firm. It is stiffer than a stock seat, but not by much. I actually preferred the firmness because I have a little extra gravity pulling on me and stock seats can be a little too squishy for my tastes. Also the stiffer seat gives the bike a more “sit on top” feel rather than sinking into the stock seat and feeling locked in a pocket. 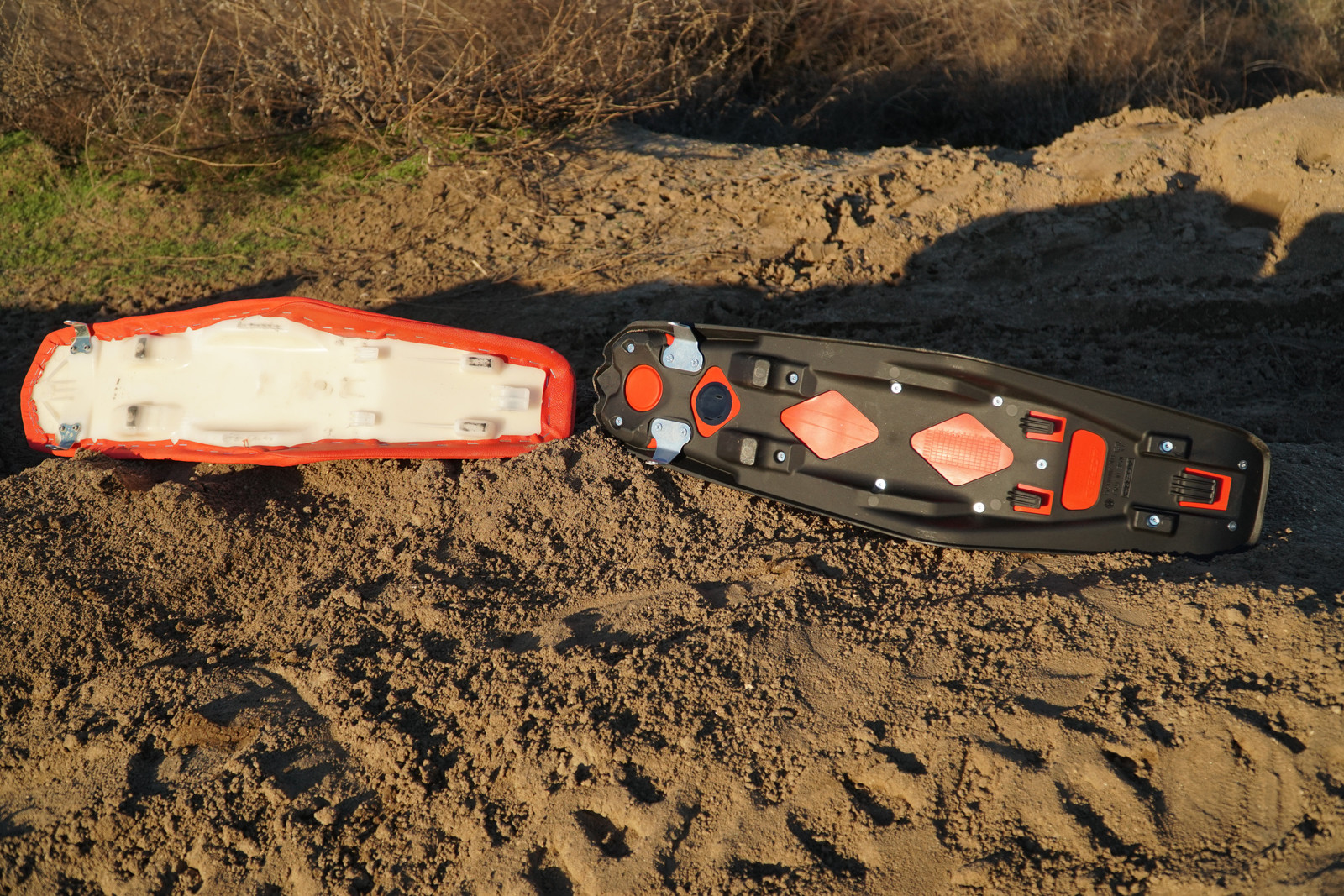 Who is this seat for? I would say it is not for the guy or gal who is trying to get their bike as light as possible or a lighter rider who finds stock seats to be plenty firm. That being said, it would be ideal for more of an off-road rider or a motocross rider who rides in rainy, muddy, soupy conditions a lot. Not only will the extra grip keep you on the seat better, the fact that it is waterproof means you can ride in the rain and slop without worrying about your seat turning into a sopping sponge, and you can power-wash the crap out of it and not worry about it getting waterlogged.

THIS SEAT IS A KEEPER
Rating:
The Good
Solid color foam, can't rip or tear wear and seams
The Bad
Yeah It is heavier than stock
Overall Review:

I have been running this seat on my 17 TX 300 for three years about 120 hours, after using up the stock and a Seat Concepts cover. The soft seat is more firm than stock but it breaks in  and the foam density stays consistent rather than packing. I will buy another one for my next bike.

Post a reply to: THIS SEAT IS A KEEPER

Product
Acerbis X-Seat Soft
Type
Complete Seat
Construction
Colors
Miscellaneous
Fully external plastic shell with anti-slip grip.
External plastic shell bonded with a waterproof inner foam.
Shell-bonded, expanded waterproof foam for maximum comfort.
At 1,450 grams, lighter than leading competitors.
Fully waterproof; the integrity of seat does not deteriorate after pressure washing.
Rear seat clamps are steel, while front brackets are plastic.
A Soft version is available for better comfort (some fitments).
Notes: Washable with pressure washer and soap and water only - do NOT use chemicals or solvents. Image is for representation only; actual item may vary by fitment.
Price
$199.95
More Info
Review This Product
What do you think?
To add review, please join, log in or connect to Vital using your Facebook profile Login with Facebook.
Seats & Seat Covers 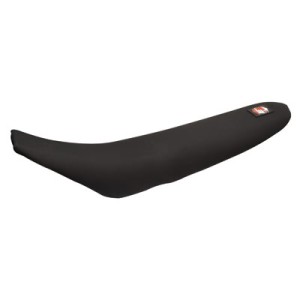 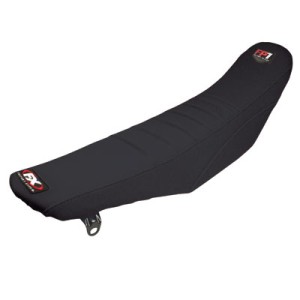 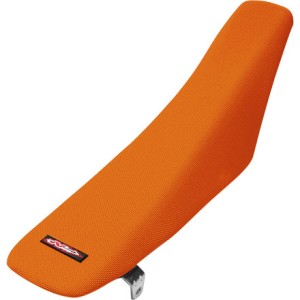 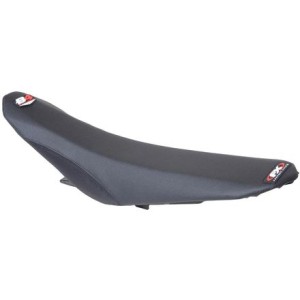 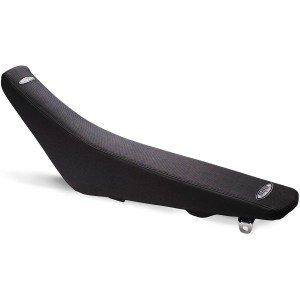 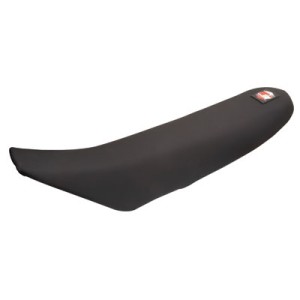 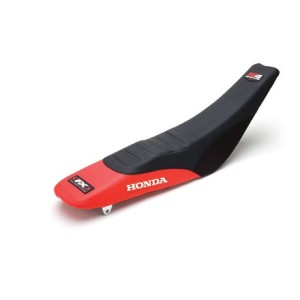 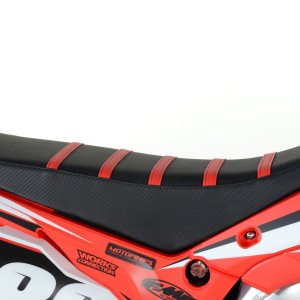