Since 1985 Arrow has been crafting exhaust systems that have seen competition in all forms of racing at the highest level such as; MXGP, Dakar, World Grand Prix, World Superbike, and MotoGP. Having amassed over 40 World Titles across multiple racing disciplines, and countless race victories, its safe to say, Arrow knows how to build exhausts.

Full system for the 2020-2022 KX 450, this one constructed of a Stainless Steel header and a Stainless/Aluminum Silencer with a Carbon Fiber endcap. They do offer a full Ti system, but since I had to purchase this exhaust due to supply shortages at the beginning of the year, I chose to the cheaper of the two.

Installation was a complete breeze. System came with everything needed as well as any bolts that you would use that were not stock. Only issue with installation was the instructions or lack of. While for the most part installing an exhaust is straight forward, the order in which the bolts/washers/spaces go into the silencer hanger is a bit trial and error. But easy enough to figure out.

The Arrow Race-Tech exhaust also comes with a “DB Killer” which is basically a reducer that fits in the exhaust tip, secured via snap-ring. While it does reduce sound from a distance, it’s as though it increases the sound to the rider, echoing back with a rather annoying “popping”.

This exhaust was a tricky one. While an increase or change in power can usually be felt with most systems, the same can not be said for the Arrow Race-Tech exhaust. For months I went back and forth at multiple tracks trying to see if I lost my feel, or if there was even any difference at all. It wasn’t until I was able to ride a completely stock KX450 back-to-back that the difference became evident. Being that I was riding the stock system, coming in waiting for it to cool enough to handle it, then mounting the Arrow system, it seemed as if my brain had reset. Once a back-to-back comparison was able to be had, then I was able see the reason I couldn’t tell the difference from the stock power. Simply put, the Arrow system mimicked the stock power curve extremely closely, with some pluses. Meaning there was no massive hit or shift in the power curve to make the system stand out. By keeping the characteristics of the stock, it allows you to keep the fun playful and manageable power of the KX450 engine but allot you just enough more to make getting over an out-of-the-corner obstacle a little easier. It also cleaned up the power curve as well, particularly in the upper end. The stock system I felt signed off towards the top, this can also be helped through mapping, but the exhaust accomplishes this as well.

Jumping back to the Tokyo-Mods tuned ECU test that I did earlier this year, this system reacted very well to the ECU (or vice-versa). With the tuned ECU adding extra throttle response and pull from the crack of the throttle, as well as a cleaner pull through the range and more full feeling top end, together this paring makes for a rather potent combination. One that is still rideable in most conditions (ex: Glen Helen at the end of the day was difficult to be smooth with the increased throttle response and power. For this I preferred the Stock ECU w/ Green Coupler), without being too tiring. When riders say in the “I wish the KX had a bit more power in sandy or deep conditions” this is the combination they are hoping for.

If you like the rideability of the KX450 in stock form but want just a little more throughout powerband and a cleaner pulling top end, this system is for you. Additionally, if you like being the one who’s bike has unique parts, this will fit the bill. Play around with mapping and you’ll be rewarded with a healthy increase in power and a bike that is still very rideable.

Who it’s not for:

Someone looking to get massive gains out of their bike, or someone looking to shift the power for either a specific riding style or environment. In the full stainless trim, the system weighs more than stock, so if weight is your concern, you’ll have to cough up an extra couple hundred to get Ti. At that point is $1,178 worth it for a system that only provides decent performance increase and possible weight savings? I suppose that depends on how much of a burden your heavy wallet is.

A very good system, and for me, a great one. The thing I liked most about the KX450 was its engine characteristics as I felt like it was a bike that I could ride at my limit very well and for a long time. This system allowed the bike to maintain its rideability while making some obstacles a tad easier and allowing the engine to pull longer in each gear. At $845 it is a lot for Stainless system that adds weight with decent performance gains, but still, there is a benefit that shouldn’t be ignored. 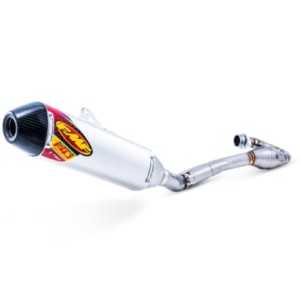