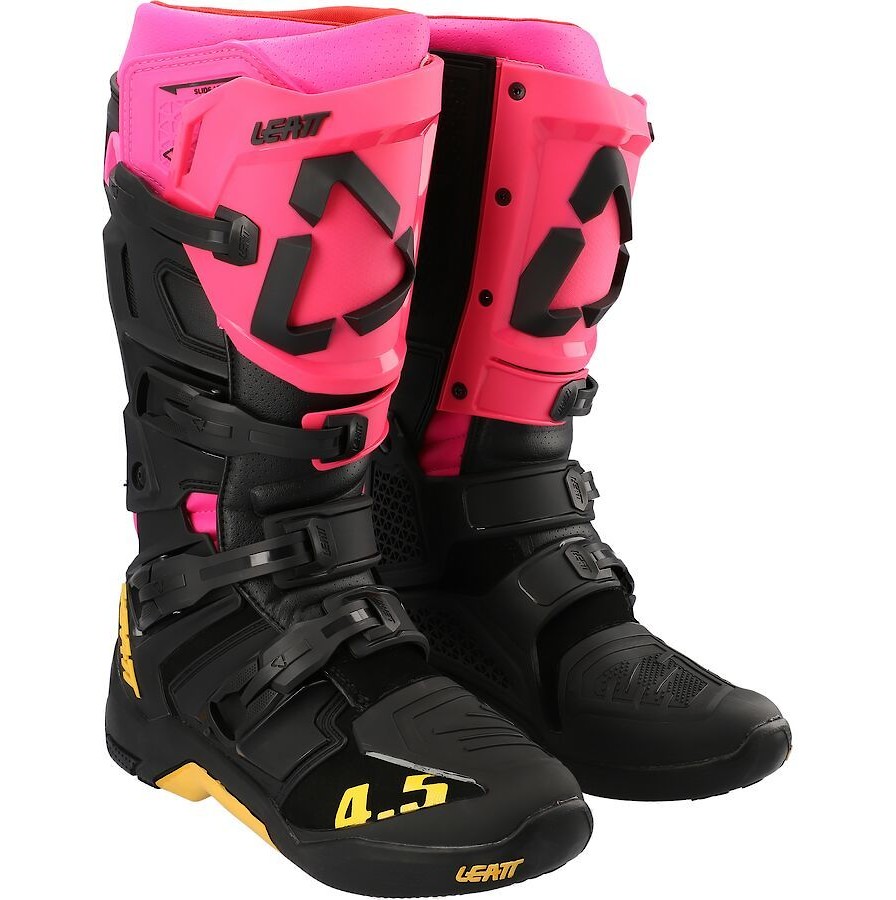 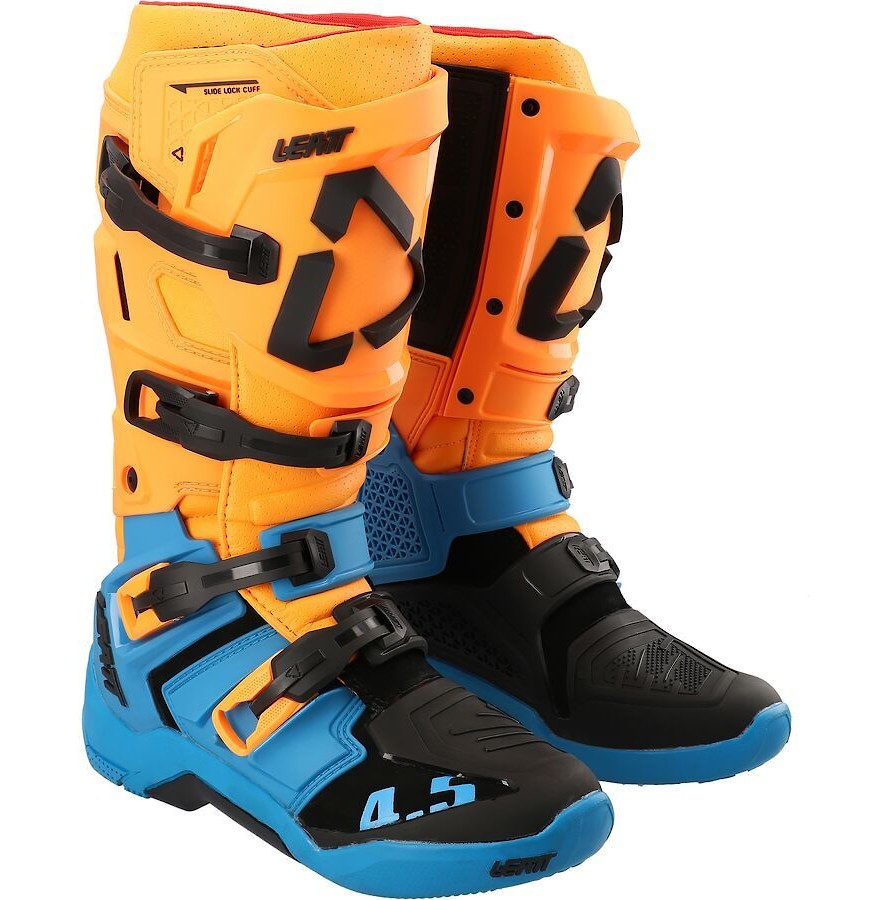 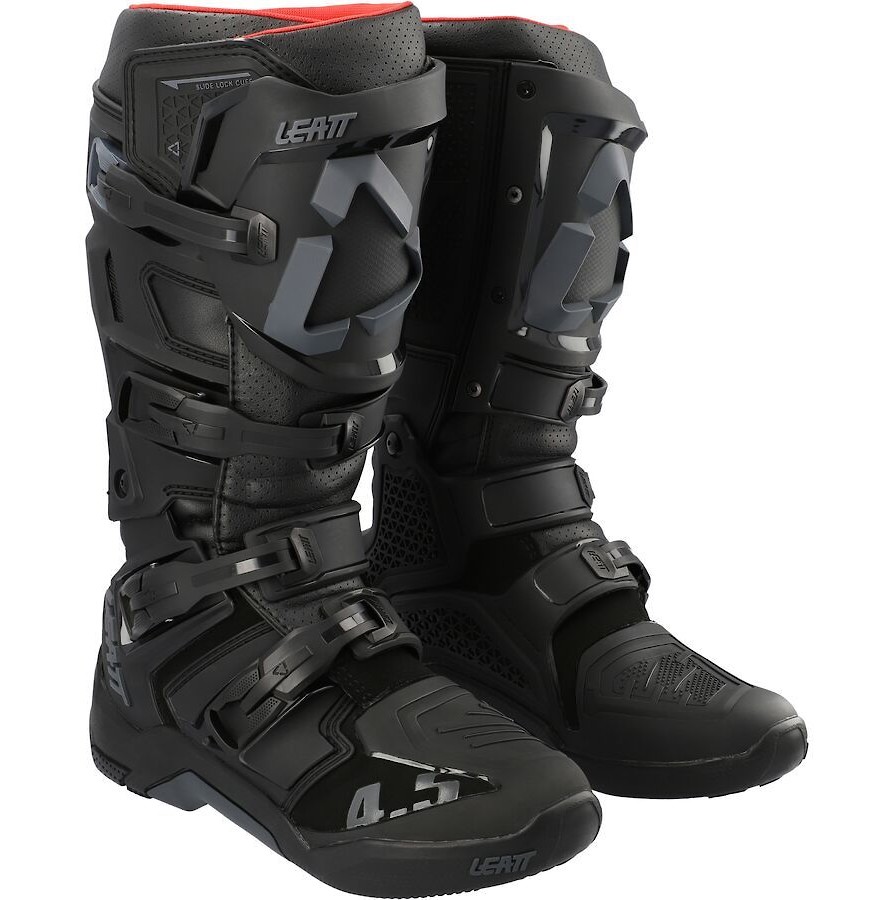 Related:
Leatt
First Ride: Leatt 4.5 Boot
A pared-down motocross boot that is easy on the budget but still holds its own on the track. 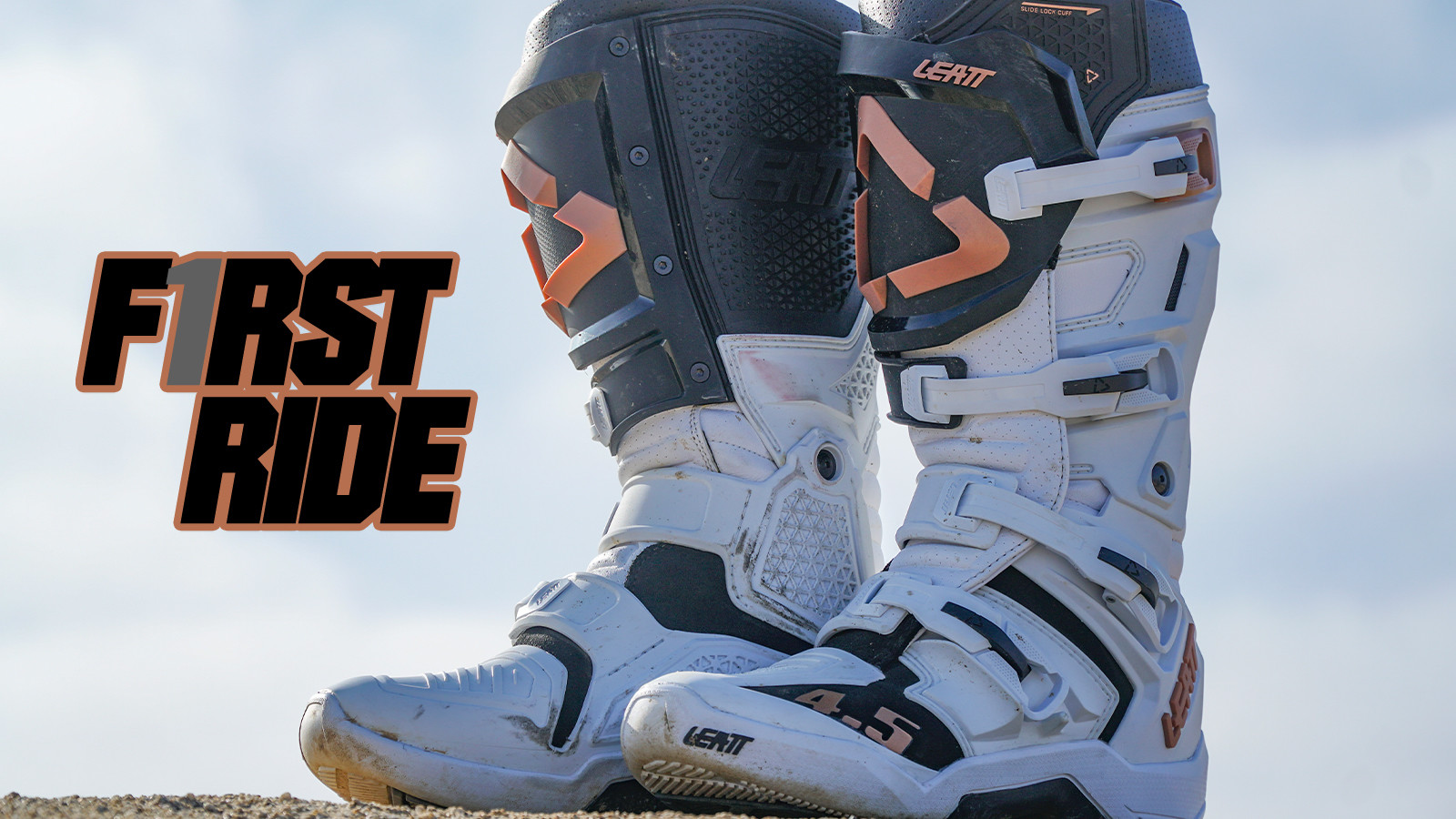 Last year Leatt released its first foray into the motocross footwear market with the 5.5 Boot Flexlock. At just under $400 it lands in the lower end of the premier-level boots. But, that is still not in your budget, for $299.99 you can get a very similar boot, the 4.5, and save some cash.

With a First Ride, this is not a full test for durability and wear, just an initial impression on fit, feel, and function. On my handy dandy kitchen scale the pair weighs in at 7.8 lb which is on the lighter side for motocross boots. After the weigh in I headed out to Perris MX for the first ride. 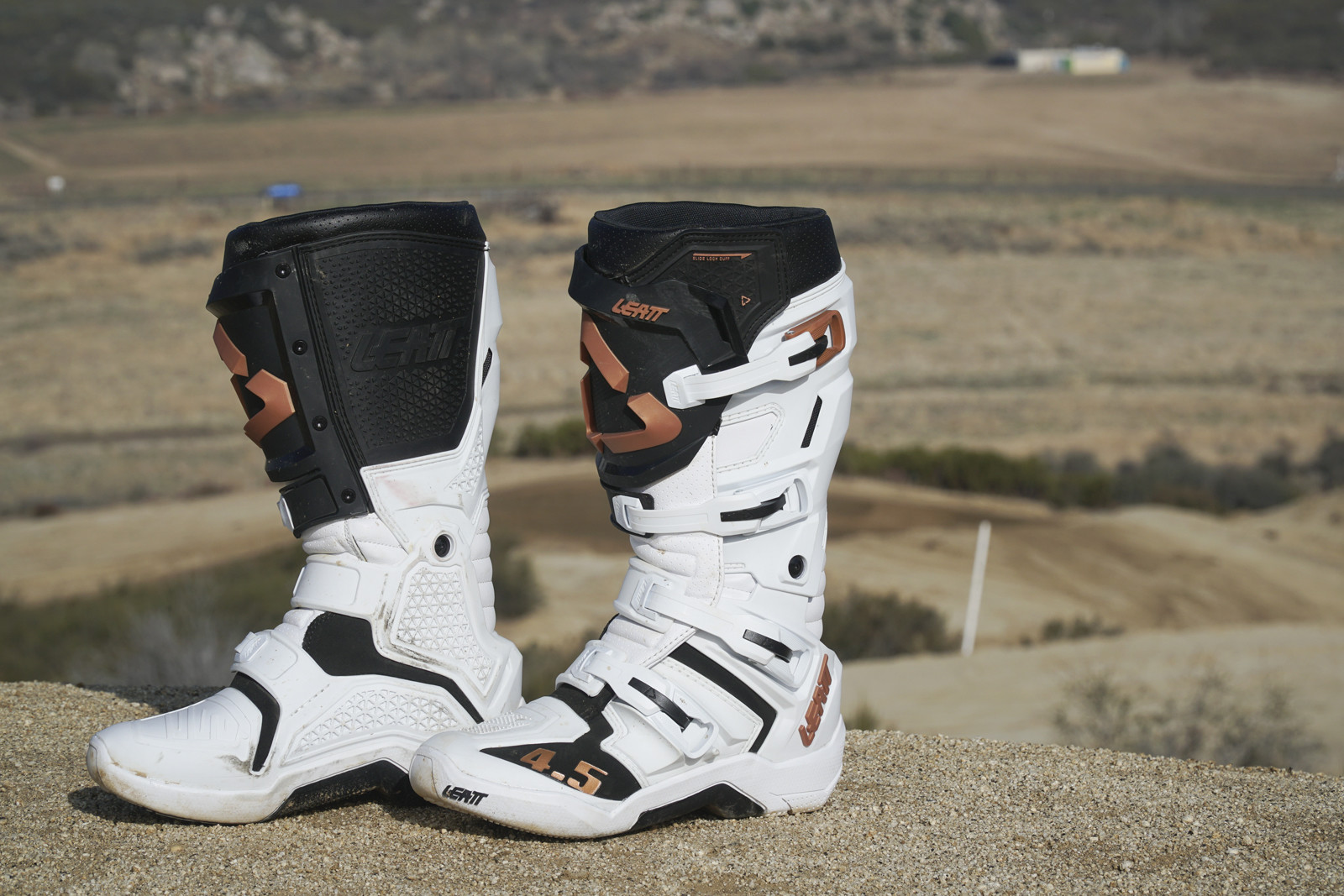 As with most products that have a similar chassis but different price points, there are material differences. Compared to the 5.5 boot that has metal buckles, the 4.5 has plastic buckles. This isn’t really going to change functionality, but they will obviously be easier to break if they take an impact. Also, the 5.5 boot has a ankle-hinge-puck system that lets you dial in the amount of akle flexion and extension you prefer. The 4.5 forgoes that system for a simpler, one-size-fits-all ankle pivot system, which is what other, even high-end, boots have. Also the hinge is higher up on the boots like the Alpinestars Tech 7, unlike say the Gaerne SG-12s that have the hinge much lower. The last thing that makes the 4.5 boots different is that it doesn’t have any specific achilles protection like the 5.5 or other top end boots. That area has a soft flexible leather material for mobility, nearly identical to a Tech 7. 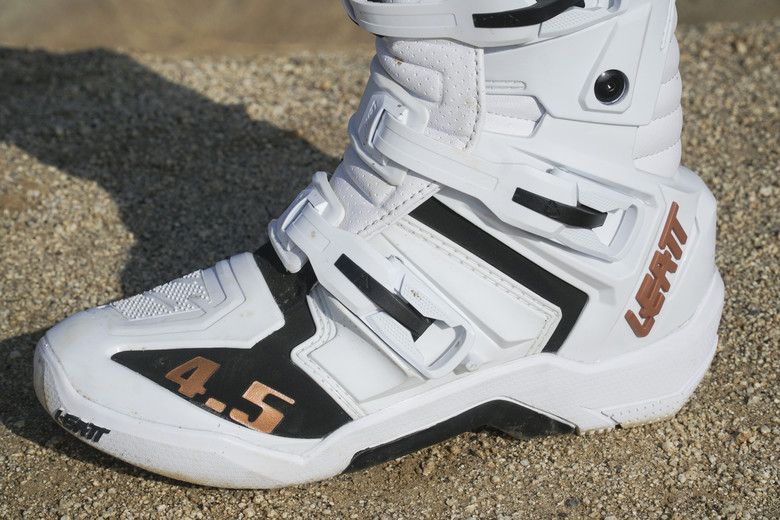 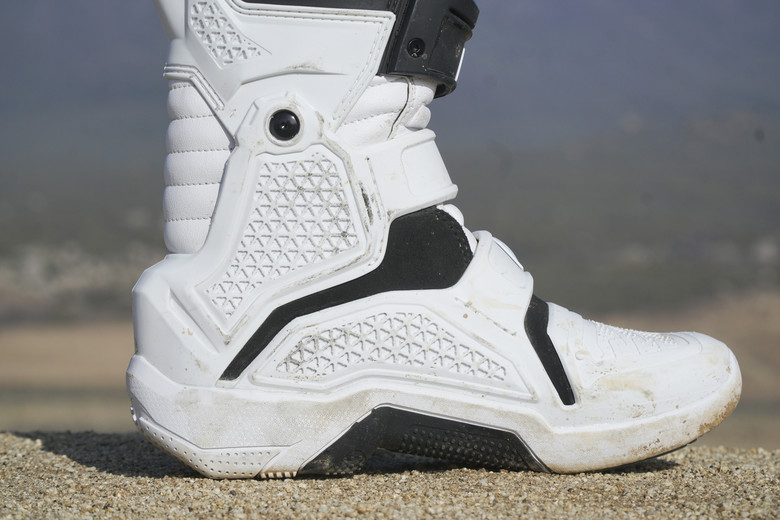 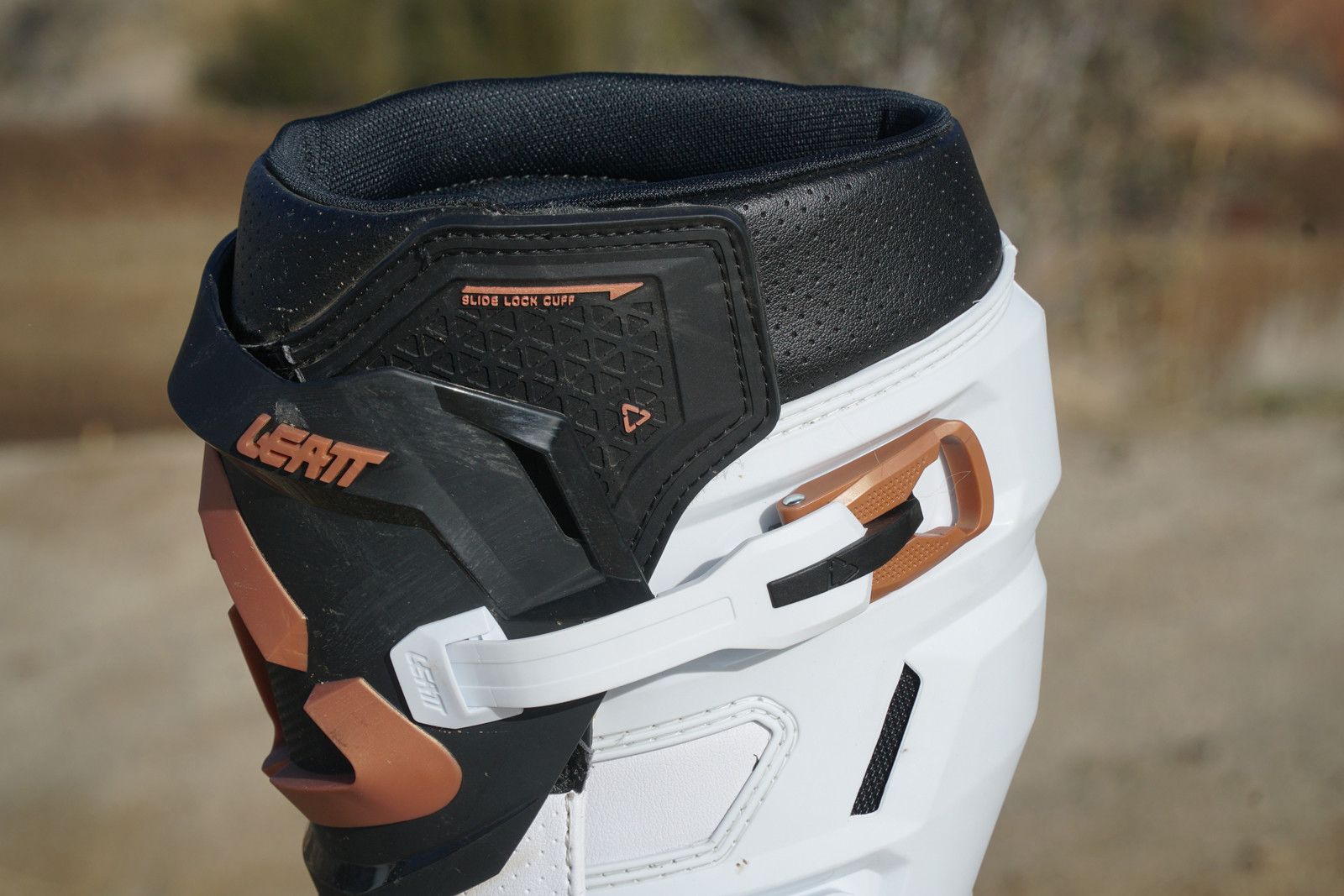 With any moto gear, if don’t fit, it don’t work. With the original launch of the Leatt 5.5 boot, Leatt made it clear that they purposefully put the boots’ fit on the wider end of the spectrum. Where Fox and Sidi Crossfires are in the narrow zone, Astars are more in the middle and Gaernes and now Leatts are the wider fitting boots. With that, I thought they went too far with the generous fit and when ordering a pair of 4.5s to test I went down from a size 10 to a size 9. This is the first boot that I’ve sized down, every other moto boot I’ve worn has been a 10. Fortunately, I made the right move. I do have to say that I prefer the tightest possible fit in boots (while still being comfortable) and I also have a neutral width foot. 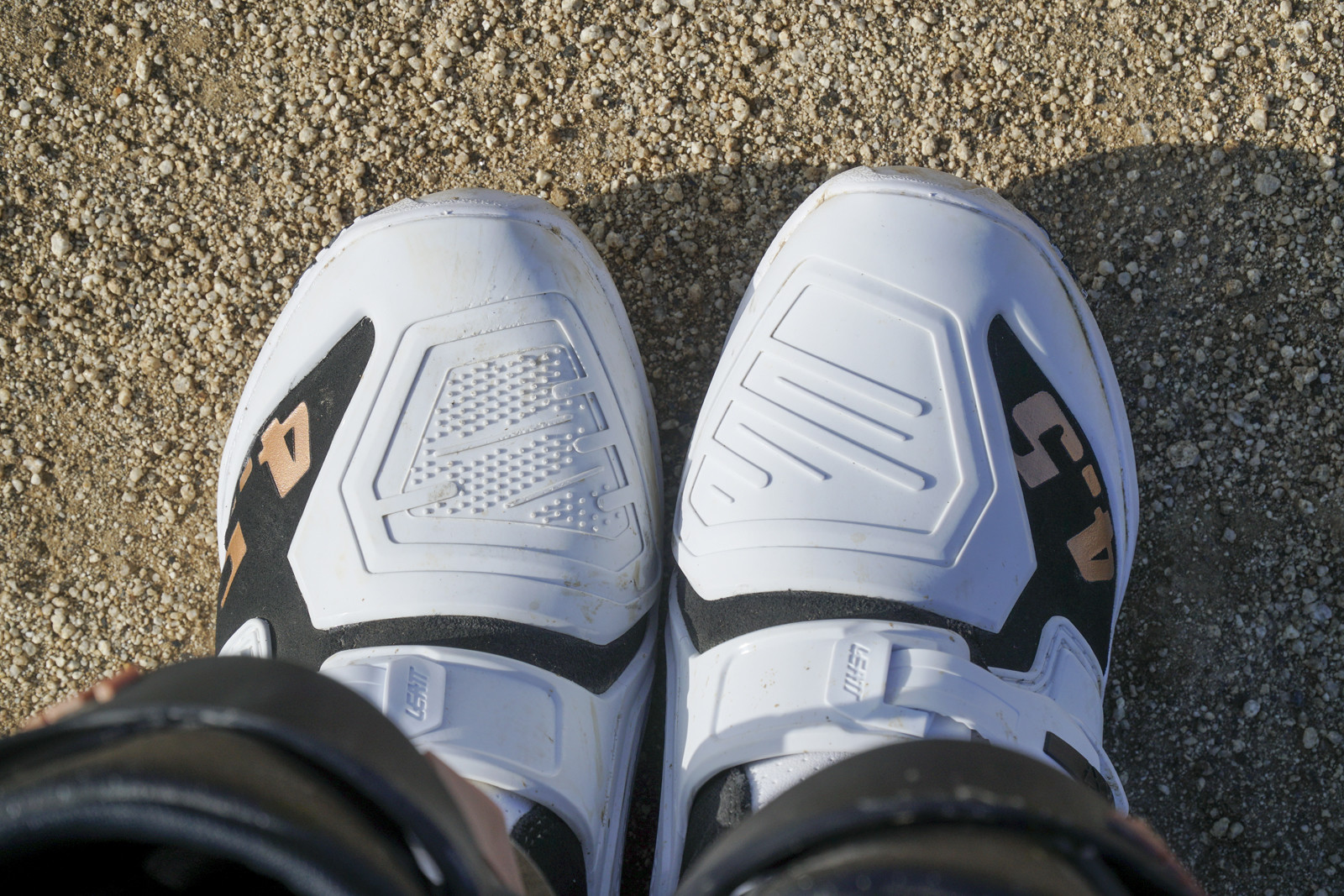 When I first slid them on I was a little nervous that they would be too tight and uncomfortable. My toes are at the very tip of the boot without a millimeter to spare, but with the extra width, my feet weren’t cramped, just supported on all sides. If you decide to size down, you would definitely want to run thinner, modern style moto socks rather than the old school thick moto socks. Plus after a few motos, I started to wear them in a little bit give me a touch more room.

Compared to Sidi and Alpinestars somewhat, the bottom of the Leatt 4.5 has a lot of curve front to back, sort of kicking up the toe. This isn’t bad, just something that takes a little getting used to, and reminds me of the curve of a Gaerne SG-12. The padding inside is adequate but not super cushy like the the booty of a Tech 10. If you like that feel, these will feel a little more lean in the padding department. The foot bed has a good amount of cushion and was actually very supportive. Also, the ankle opening is a little on the tight side but I’d rather have a tight ankle opening than feeling loose and unsupported. 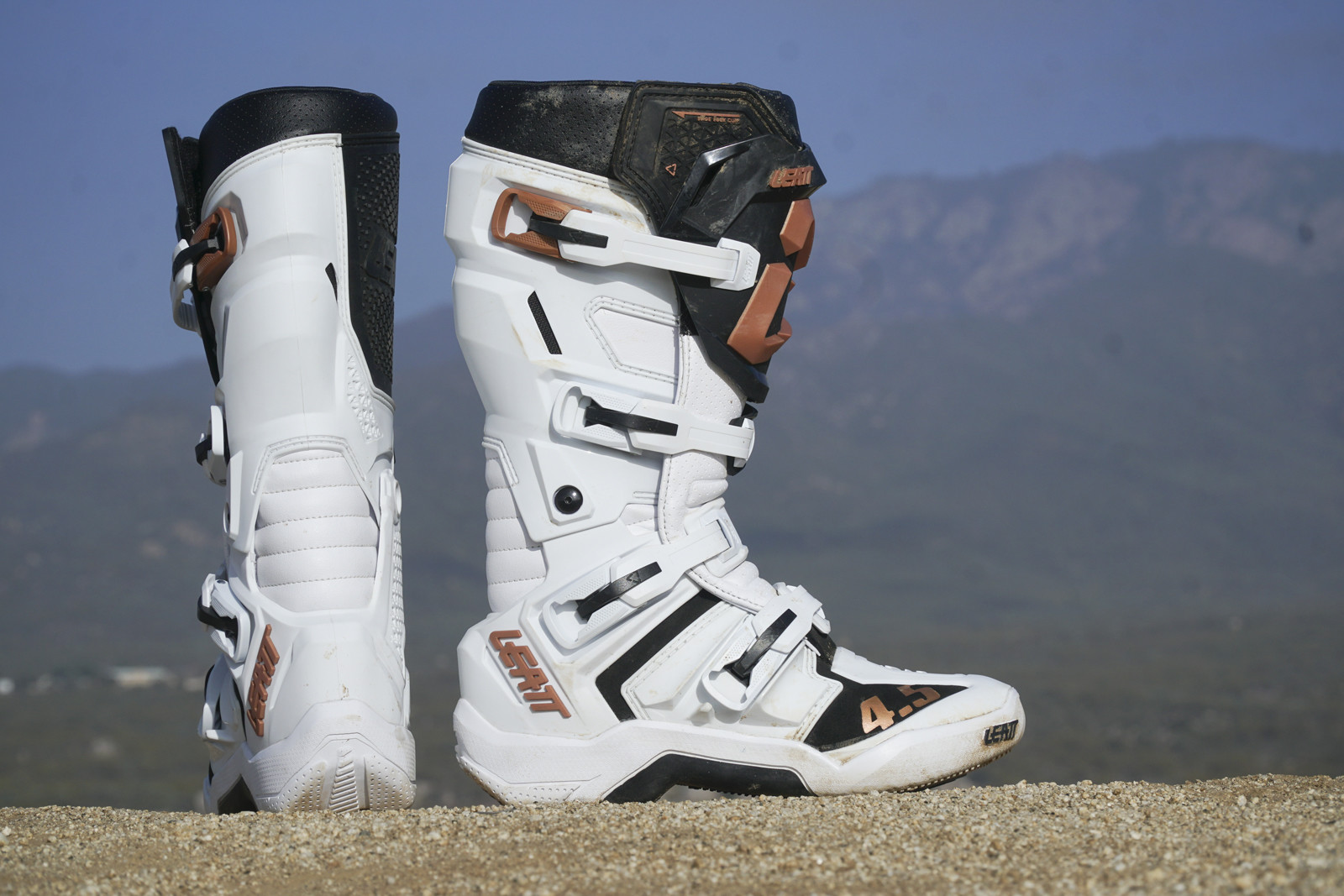 If I didn’t look down while I was riding, I would say that these boots feel like an Alpinestars Tech 7 and a Fox Instinct had a lovechild. With the smaller size, the Leatt 4.5 has a similar fit and feel of the Instincts but has more the protection level and mobility of the Tech 7. Right off the bat, there is no break-in period for ankle mobility. The ankle pivots and the relief areas (where there is no plastic) of the structure of the boot give the boot good flexion and pretty good extension. They are by no means too flexible or floppy; you still have to give a conscious effort to point your toe, but just as much as any top-level boot. They are easier to flex than to extend, but that is on par with most boots.

Bike grip is great. With a big, textured rubber pad on the inside of the calf, you can really latch on to your machine. Plus the inside ankle hinge is pretty low-profile and isn’t noticed while riding. I grip the bike with my ankles quite a bit and I did notice one hot spot on my right foot, which wasn’t where the hinges are, but below where the rigid part of the lower chassis starts. It wasn’t detrimental to my riding but it was sore after and I had a red spot. 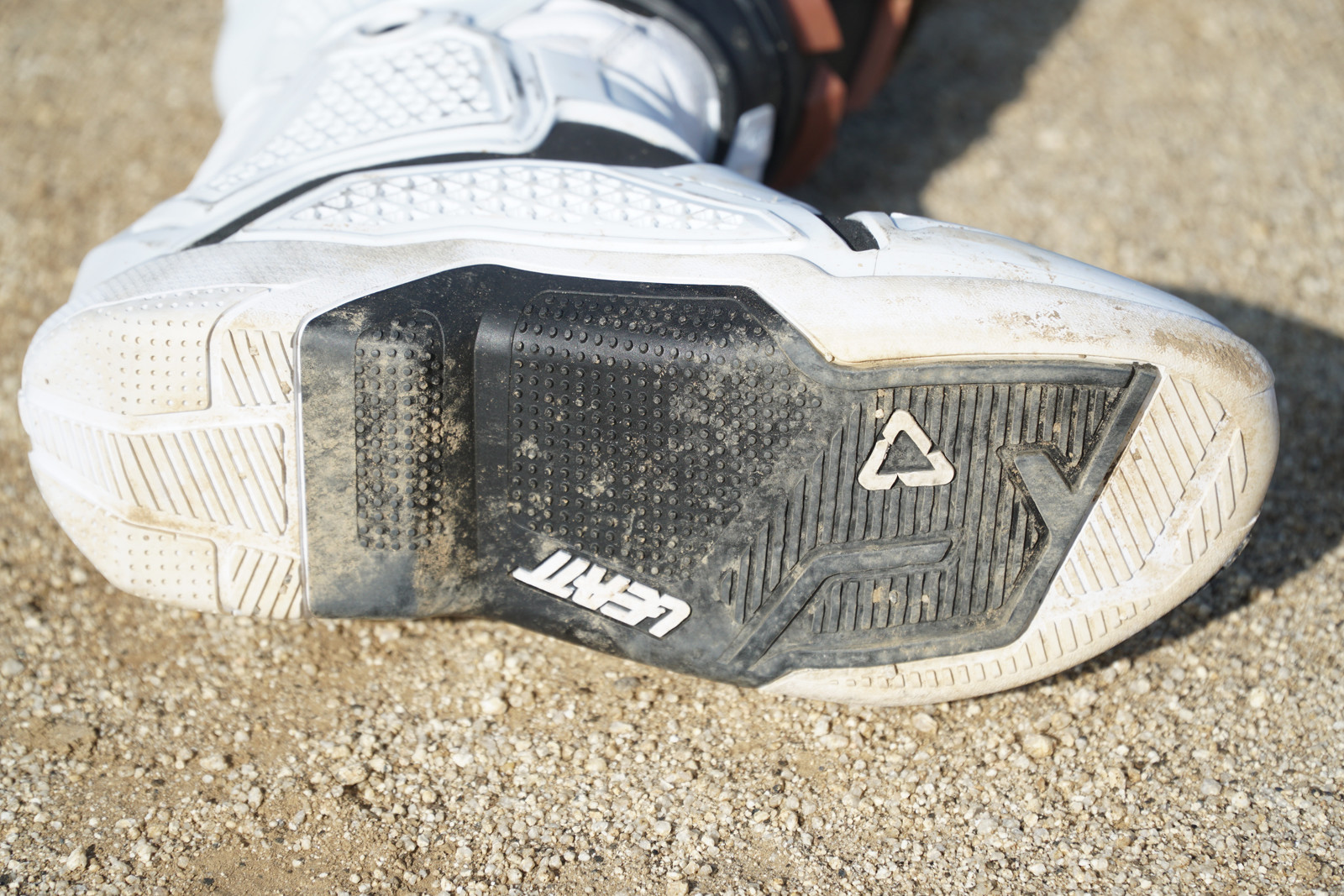 The toe box is very low profile and was easy to shift and brake when I wanted to, and to NOT do so accidentally. Peg and control feel is very good with the 4.5 sole. You can feel where your feet are on the pegs and feel the tip of the brake and shifter. Grip on the pegs is also very good.

The last cool function of the Leatt 4.5 boot is, by far, hands down, the best velcro system on the market. It is a one way velcro that allows the top of the boot to slide closed as you wrench down on the top strap, but stays in place. All other velcro closures make you try you best to get the velcro tightly closed then get the buckle tight, which can make the velcro wrinkle if it wasn’t tight enough. Great feature. 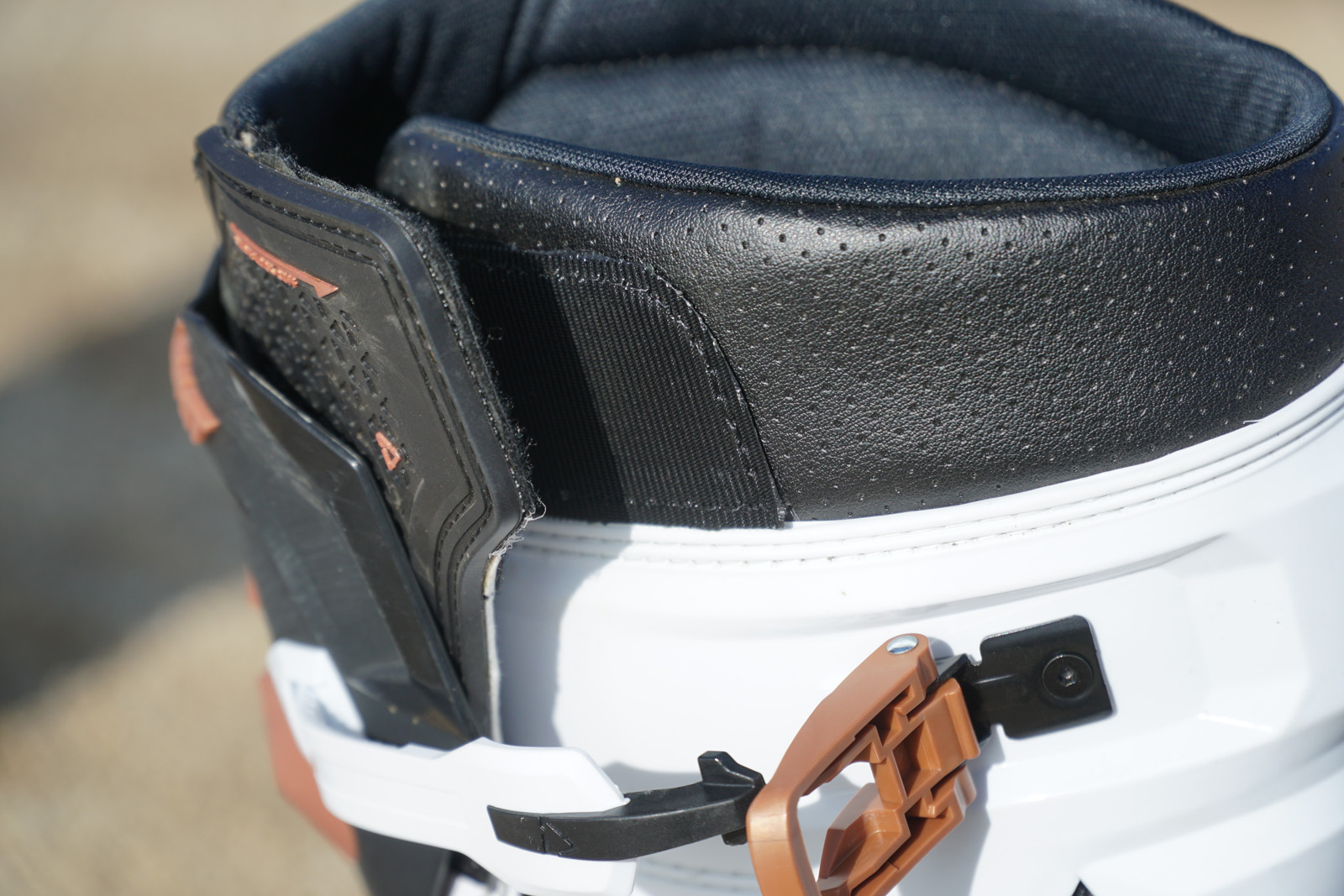 I’m very happy with the Leatt 4.5 boots so far. A little while back I did a mid-price boot comparison ($200-$300) and some of those felt like cheap boots. They were noticeably less protective, supportive, and legit feeling than the top-of-the-line boots, which was to be expected. But the 4.5s feel and function much closer to the premier boots than any budget boots I’ve tried. It dosen’t feel like corners where cut or sacrifices in stoutness where made to hit a pricepoint.  Time will tell how they hold up and how quickly the soles where down, but I’m pumped to have another go-to pair of boots in the garage.

Review This Product
What do you think?
To add review, please join, log in or connect to Vital using your Facebook profile Login with Facebook.
Boots 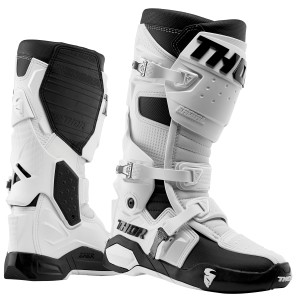 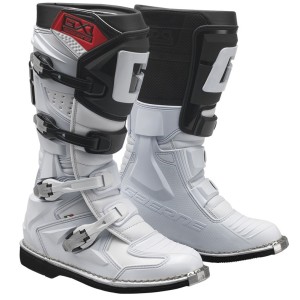 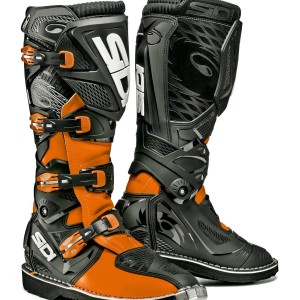 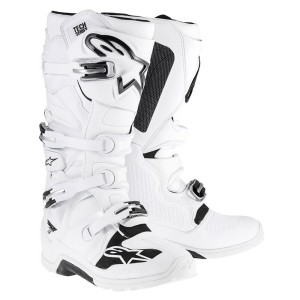 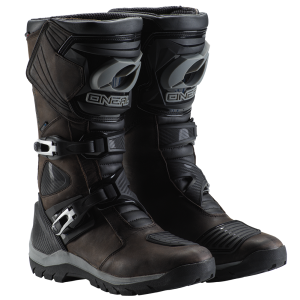 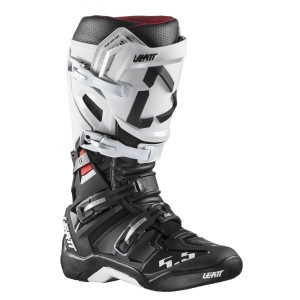 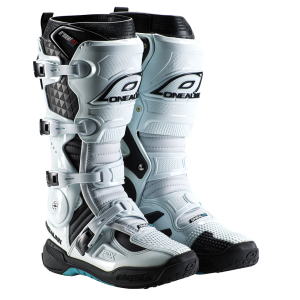 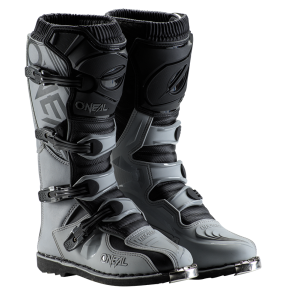