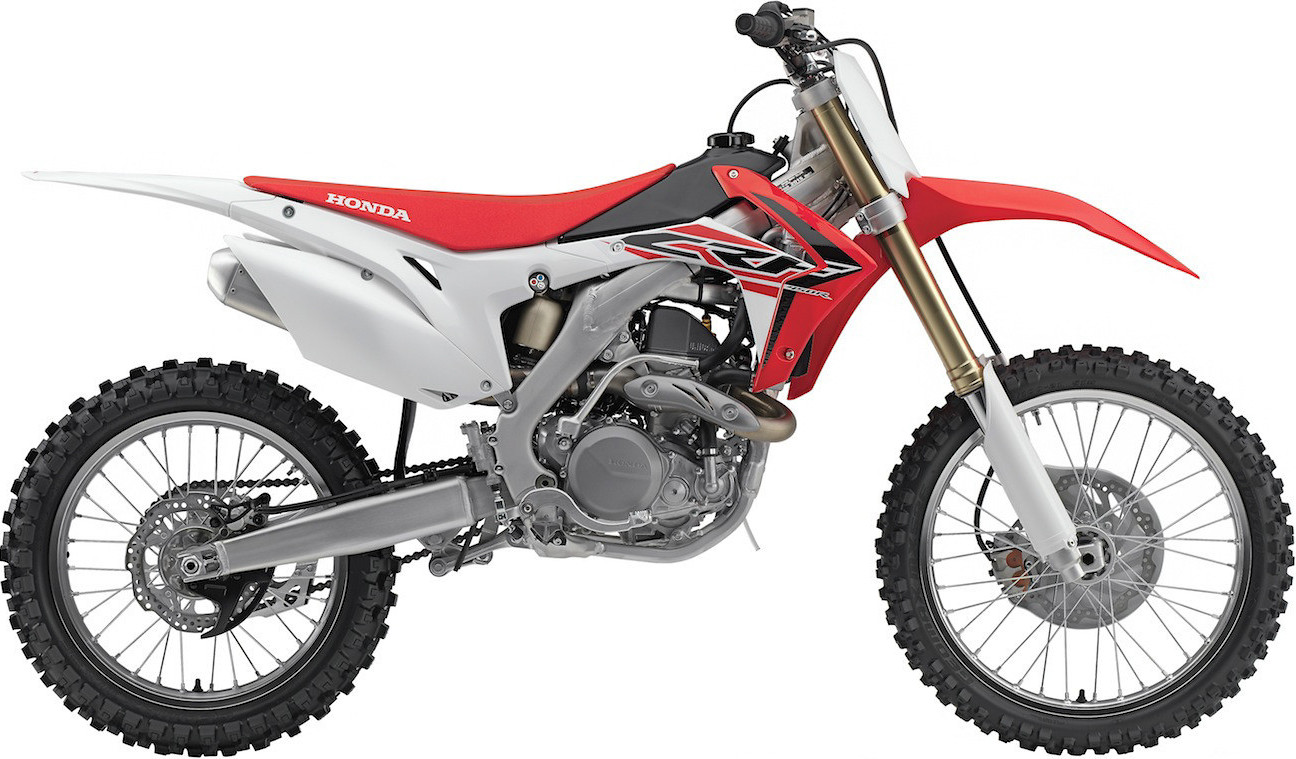 Need a good comparison on the 2016 Honda CRF450? Well, we have five test riders to give their thoughts on the lightweight, nimble red machine. For 2016, the CRF450R went through a number of changes to suspension and chassis, but nothing major on the engine side. These thoughts, taken from our 2016 450 Shootout, should give you an idea if Honda's nimble approach is enough to overlook the mellow power that so many argue about. 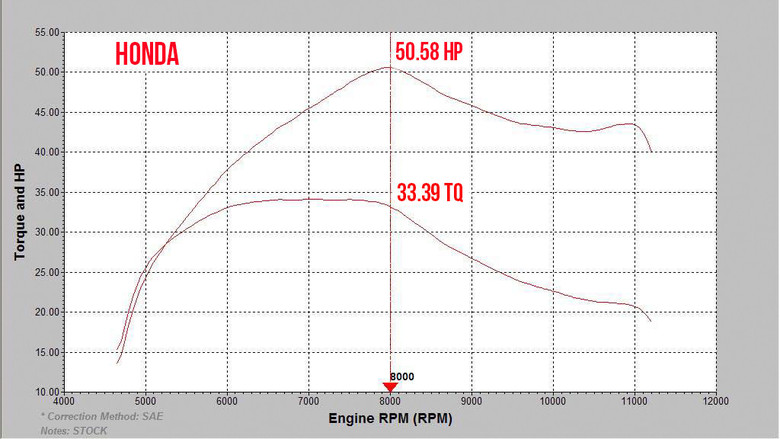 It's funny to think that the Honda has had a small, lightweight, 450 platform since 2009 and just a few of the other brands are finally getting down to that weight and size in 2016. Even with this time though, it seems like Honda has still struggled year-to-year with chassis setup and other areas of the bike.

For 2016, the changes are very minor but in typical Honda fashion, their smaller changes seem to be more effective than the large ones. The longer forks, different link, and new shock settings have definitely been a positive and helped stabilize the bike on more open tracks. From there I still made a few changes to the bike, such as opening the high-speed compression on the shock and slowing down the rebound. This was done mostly to get the bike to squat and settle the rear end. 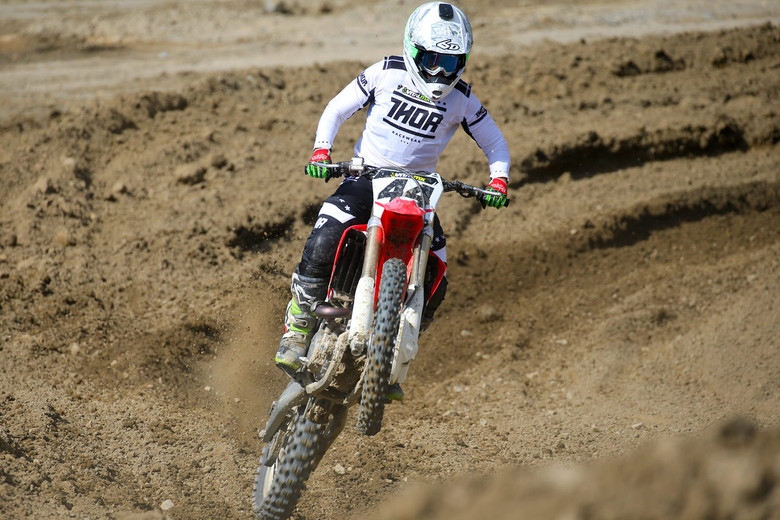 Even though I'm a fairly smaller rider, I actually find the rider compartment to be a bit cramped on the Honda. For me, the bars are too tall and the seat seems to get me trapped in this pocket at the front of the bike, making me feel like I'm sitting right on top of the front tire. To move around a bit better, I like the rear lower so the seat flattens out a bit and then roll the bars back so it's a bit easier to get to the rear of the bike.

As for the engine, it's just as you'd expect from the Honda; mellow and easy to ride, but somewhat frustrating in certain situations. When the track is soft or smooth, I just feel like I'm always wanting a bit more power everywhere in the powerband. But the rougher it gets, the more acceptable the power becomes as the bike becomes easy to use and throw around, since it won't catch you off guard when making last-minute decisions in rough sections. There are times where more power in rough conditions is needed, such as squaring up a rough corner before a large jump, thus giving yourself a bit less room to accelerate. However, when it comes right down to it, this bike is ridiculously easy to throw around and when you have it set up right, you feel like Superman since you can ride it as close to its limits, when compared to the other models.

The Honda is an interesting bike to me. I feel there's a lot of potential in the bike, but in stock trim there were a few things I struggled with, starting with the power. It makes decent power, especially in the advanced power setting, but it's a little uninspiring to ride and lacks a bit of the fun factor of the first three bikes on my list. Where it lacks in terms of power, for me, is still in the low-end pull. I personally like to have a motor that has more of a hit, which I can then control with the throttle and/or clutch. 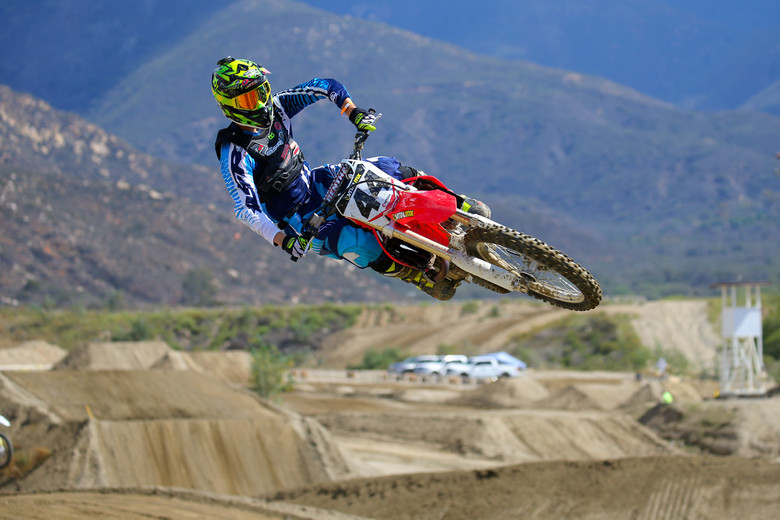 Similar to last year's model, I still felt the forks were harsh and twitchy. And ever since 2009, I've felt like the front wheel is right underneath me, giving the bike a short wheelbase feel. We made some adjustments to the forks, which helped, but I feel it would take some internal suspension work and possibly triple clamps, to get a front end feel I'd be more confident in. Having said that, the Honda front end did settle pretty well into ruts for me...not quite the pure cornering ability of the Suzuki...but it was easy to corner. My favorite part about the Honda was the confidence I had in the rear end of the bike. I felt like I could put the rear end wherever I wanted, and I wasn't nervous if I came into a bump or sharp edge a little off-balance or sideways. For me, the rear of the bike would predictably soak it up and stay underneath me throughout the track.

One thing I did notice about the seating compartment was that it pushed me up towards the tank when I was sitting and it required a bit of effort to stay in a more neutral position on the seat. I also noticed how thin the stock grips were. They didn't offer much cushion between my thumbs and the handlebar, which made for some sore calluses on the inside of my thumbs after a few laps, but that's an easy problem to solve. I did like the small steering stabilizer behind the front number plate, as I felt it helped keep the front end from being as twitchy as it otherwise might have been.

I'm a diehard Honda guy, which means it kills me to rank it against the other 450s. That being said, I personally know the Honda has drawbacks in stock form, but does offer great potential. Due to my many seat hours on the Honda, it instantly feels the most comfortable to me and the seat-to-bar positioning, and fits my style the best. The bike still feels very light and nimble, although many competitors are getting really close.

I know Honda isn’t broadcasting any motor updates, but I felt that the 2016 was slightly better in power over the 2015, or at least more responsive. As for the mapping, I was leaning towards the stock setting, as the aggressive map felt too lean. The overall lack of power in stock form is still Honda's weakest link. That said, the Honda begins to shine a bit more as the day goes on and the track breaks down. Once the track dries out and hardens up a bit, you see what Honda is pushing for with his bike. But when it's early in the day and the track is soft and loamy, you can get a bit frustrated.

As for the suspension, I went with their recommendations on the fork and really didn't make much in the way in changes from there, as well as with the shock. As I'm very comfortable with the bike, the balance felt fine but the shock definitely feels under-sprung for my weight. Overall, the Honda offers a light and nimble package with an easy to ride feel. The engine however does have some great potential, but needs an influx of cash to get it where the other brands have started.

Honda obviously doesn't win the top pick because of its raw power, but it can because of its overall package. It starts at the rider cockpit; when I sit on the Honda I just feel comfortable because of how thin it is and the feeling of the bar bend. With that said, every great thing has its faults and in this case, the Honda's front end can be less than desirable. For me, the biggest complaint would be that when traveling through the initial part of the stroke, the fork ramps up to compensate and creates a severe mid-stroke harshness. I do think this also comes from the rear of the bike not being very supportive, with a stiff enough rear spring for my style. I bumped the fork up to 38 PSI with two clicks stiffer on compression to help hold it up in the stroke. As for the shock, I slowed the high-speed down three clicks and set sag at 106mm, trying to get the rear to settle a bit more under acceleration. These changes seemed to be what worked best for me. 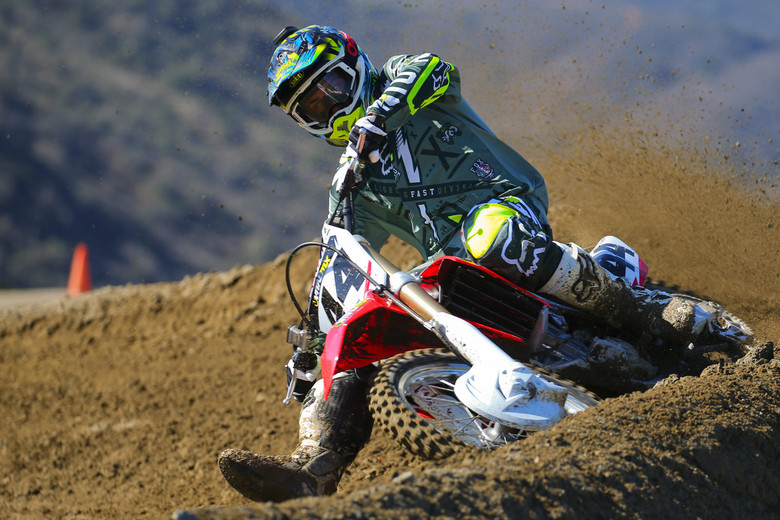 At the end of the day, this test was based on what bike is best off the showroom floor and that was the Honda for me. This is because it can corner on a dime, and can be placed anywhere I wanted due to its light, nimble chassis. The power may not be as arm ripping as its competitors. but it's linear and useable no matter what track conditions you place it in. For me, this made it hard not to pick the Honda as my day-to-day bike.

Since I personally own a 2015 CRF450R, I tried to save this bike until later in the day to give it a fair comparison. The reason I own one, is the fact that I'm a big fan of the slim and flickable feel of the Honda. As a smaller rider, the cockpit gives me a lot of confidence in how I can control and give input to the bike when riding.

As you may guess, the power of the Honda definitely didn't blow me away when compared to all the other bikes, but it definitely comes into its own as the day goes on. As the conditions break down, the engine really suits the chassis, allowing me to ride closer to the limits without putting myself into a bad situation. This makes the Honda the easiest bike to lay down consistent laps. Honda does offer three different engine maps, in which I chose the third and most aggressive setting, as it makes the bike feel the most responsive.

As for the suspension, the stock forks are a bit twitchy and deflective at high speeds, but the shock feels very planted at speed.

As mentioned above, these opinions were taken from our 2016 450 Shootout. If you're interested in how it faired against the competition and how the other models performed, click here: 2016 Vital MX 450 Shootout. 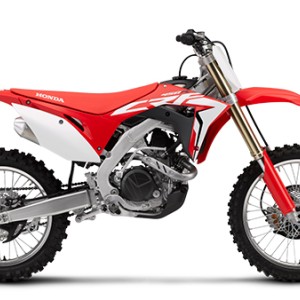 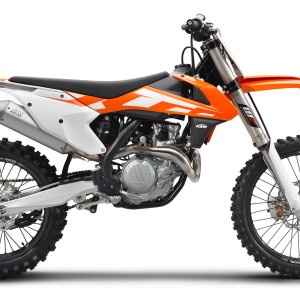 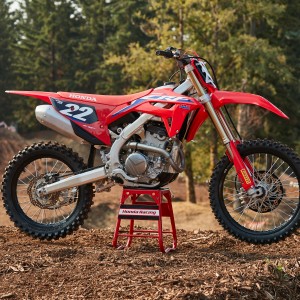 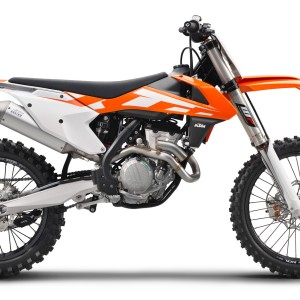 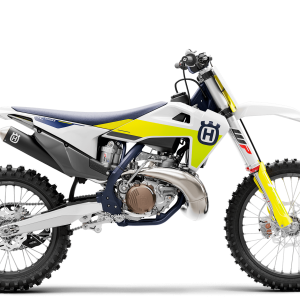 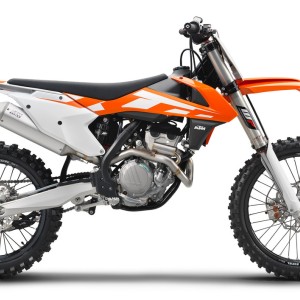 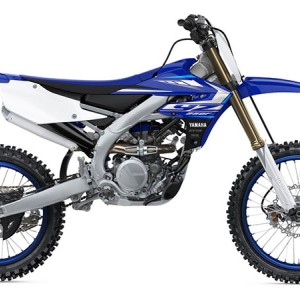 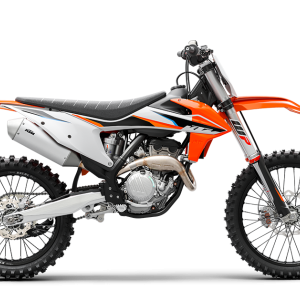