It will be the same city, same venue, and the same gate full of riders this Tuesday when the Monster Energy AMA Supercross series picks back up in Georgia at the Atlanta Motor Speedway live on Peacock.

But one thing that will not look the same will come to fans courtesy of Team Solitaire Nuclear Blast Yamaha. Like in so many rounds previous, the team from Glendale, Arizona are about to have some fun and they will do it all while paying tribute to one of the most influential metal bands of all time, SLAYER.

Part of the Nuclear Blast family, SLAYER has been a fixture in van stereos heading to motocross tracks since 1981 and will probably never leave the scene even after completing their farewell tour which began on May 10, 2018, and ended on November 30, 2019. The tour, consisting of 147 shows worldwide, served as a conclusion of the band’s three-and-a-half-decade-long career. 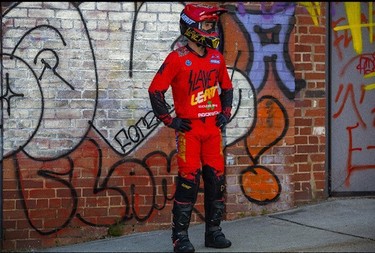 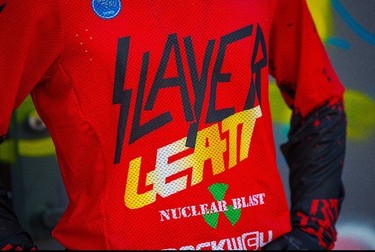 Chris Elliott of Team Solitaire gave fans a little run down of what to expect for Tuesday, “This isn’t the first time we’ve ran a SLAYER themed race and it won’t be the last. This round is the one I always have circled on my calendar.  Fans love it and our social media always goes crazy over this stuff!  But we can’t take all the credit, it’s only possible with all of our amazing partners believing in us and helping us make this happen. Being that the gear is the main focal point, we worked closely with Nuclear Blast and Leatt to create what we feel is some rad looking tribute gear.  From there Shades of Gray slayed the helmet, Throttle Syndicate threw down on the one off graphics and helped ODI come up with a one of a kind blood spattered bar pad. Guts Racing was the finishing touch with their grey, black, and red seat cover.”

“When it came time to create the Slayer tribute gear, the team and I wanted it to be different from years past having its own unique style yet staying true to the bands look and feel. The efforts put forth from all affiliated team sponsors and team members has made this year’s overall collaboration such a phenomenal experience.  I am looking forward to seeing Wageman and Munoz represent Slayer proudly out on the track Tuesday,” says Stephanie Slattery Leatt’s US Marketing Manager. 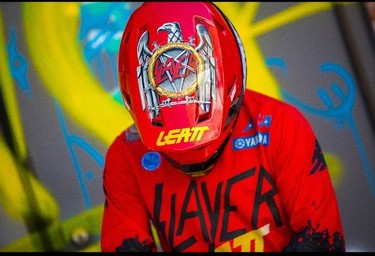 Wondering where you can get Slayer gear? Unfortunately it is not yet available to the public, but you can try to grab this very rare jersey in the Supercross – St. Judes Children’s Research Hospital Online Auction when it goes live on 4/19/21.

All info can be found at: www.supercrosslive.com/stjude