Just wanted to put up a review of my experience with Enzo racing, specifically Craig Decker. I apologize ahead of time for the length but I think it all pertains.

I'm 34 years old, haven't ridden a dirt bike since I was 22, rode and raced from about 8 til 16, then intermittent riding from 16 to 22. I'm currently not in the best of shape and don't have the same skill level I once did. The last bike I had prior to my hiatus was an ‘08 CRF 450 with FC suspension work… and it was amazing. It was the best bike I had ever had.

Fast forward to two falls ago and I came out of my hiatus and purchased a ‘14 RMZ 450. The bike turned awesome but the forks were quite harsh and due to my ability (or lack of) the engine was kicking my butt. It was just too much. With my weight (220) I thought I had to have a 450. Even after suspension work by a local racetech guy I wasn't happy. And that is no knock to him, he does great work, just the SFF stuff didn't suit me. Talking with a friend he had a ‘16 350 SX-F and loved it (besides the 4CS), said it would be perfect for me. Being the compulsive person that I am, I immediately looked in the local area and the shop nearby didn't have the KTM but a ‘17 FC 350. I jumped and sold the RMZ and got the FC.

With the first ride I was instantly more comfortable. It was enough power and broad enough to do whatever I needed it to, but felt nimble enough to where I didn't feel like I was always fighting with it like the 450. I did some work to the air box to get a little more low end grunt and changed the gearing, the bike was getting better and better.

Through all of last summer I tried to dial the suspension in but couldn't get it to where I wanted it. It felt like it was dancing a bit much and was deflecting. I couldn't get it to plant the way I wanted it to. After reading a bunch on the suspension it seemed it was a fairly common complaint and most tuners stated the first ⅓ of the stroke could use some work. So… I started shopping.

After talking with numerous suspension tuners it seemed like everyone was starting around 1K to do what I wanted. Whether it was special coatings, finishes, or “upgrade kits”, there was always something more than a revalve that they wanted to do… except Craig Decker of Enzo. Talking with him really sold me. He was friendly, knew the suspension, and was confident he could get me what I wanted with minimal cost. He had two other, more expensive options, but actually thought the revalve would give me a better result with my wants. I was sold! Packed up the suspension and sent it out that Friday. I ended up adding an xtrig preload adjuster for ease of setup, and it was still around $300.00 cheaper than most others!

The suspension came back, packed well, with a free shirt and a sheet of the recommended settings. I bolted it up, set the sag, and went out to a private track the next day.

With a few clicks up front and a half turn on the high speed compression out back, the bike was dialed. It was night and day from stock suspension. Plush, stable, confidence inspiring are the words that come to mind. The bottoming resistance was superb for my slow man jump casing. The rear tracked and handled the rollers no problem. No pogo effect at all. Just absorbed everything and kept the rear driving. I don't know what voodoo magic Craig Decker has up his sleeve, but this is the best suspension I've ever ridden. I was so impressed, but I didn't know if it was just me having a placebo effect. So I took it over to a friend of mine who has his own track. He owns an older Husky CR 125 with racetech, a 2016 YZ250F stock, and a 2008 CRF 250 with FC suspension. He took the Husky for a spin, and from the hooting and hollering he was doing I could tell he liked it. He didn't ride the bike stock, but he couldn't believe how amazing the bike was. Also claiming it’s the best he's ever ridden...

This is just my experience and my opinion, but if you have WP suspension, before sending it out for bookoo bucks, contact Enzo racing. Specifically Craig Decker. He works magic! I am so pleased with it, more so than any other bike I've had. If you live in the western NY area and want to ride it to see for yourself I'd be more than happy to let you send it on one of the open practice nights at the local tracks… that's how confident I am people would love it.

Hope this helps anyone looking for suspension work for their WP stuff. Stay safe out there and keep the rubber side down!

I don't know how much bike testing he gets to do(I assume plenty) but you can't go wrong with a tuner that was a top level racer and test rider. Craig is good people and no, you don't need to spend close to $1k to make the Wp stuff work well.
erik_94COBRA

The WP components perform great when setup well and he/Enzo have very good settings. Easily as good as the Showa on my Honda and very close to the legendary KYB SSS.

Henry_Van wrote:
Craig does excellent work been using him for years he did a kyb conversion to my 17 350sxf

How much did he charge you for the kyb conversion?

I have 18 aer 48s kicking my ass.. revalved/resprung still can’t get comfortable. Been looking into kyb conversion but can’t seem to find out a price
mxnick

MotoXMarc 8/26/2020 11:13pm
8/26/2020 11:13pm
Been meaning to write a review for Enzo for years and this thread just came back to life.
Enzo and Will Decker- have done 2 sets of KTM 350 WP forks for me- 2013 and then 2017 AER. ( and some Yamaha KYB's in between) . Just like the first guy wrote... Enzo /Will didnt oversell me- Will said "try a revalve first - should be good".... He was right!
I'm a nightmare to valve for cos I'm a 58 yr old ex Pro, 185 lbs, who still goes fast when the phase of the moon aligns correctly when Jupiter and Mars are in retrograde. Otherwise I over jump or come up short and am just a general nightmare on jumpy SoCAl tracks....Point is -Enzo and Will's settings get me comfortable 2-4 clicks max either direction and I'm good to go regardless of Moon Phase.
.
I first had Race Tech do my 13 350...I went with Gold Valves along with springs and valving. Sadly- not much better than stock - harsh thru mids and still bottomed.. So I took them to ENZO who I had do my Yamaha KYB's.... Will took the high road and didnt bad mouth race tech...but gave me a smile when he handed me the Gold Valves.... said something like " I think you'll be good to go". He was right.

When the 17 AER forks were stock- If I set them so I wouldn't bottom, they felt like James Stewarts Supercross forks... So I went straight to Will... explained what I felt and let him work his magic. All I can say is they feel very similar to my a couple sets of Yamaha SSS holy grail KYB"s which Will has worked on. Just a hair more stiction..but when I push- you can hardly tell the difference. Very happy.

I had the opp to ride a 18.5 KTM 450 Fact Edition which had a Race Tech spring conversion kit. Not my bike- but setup for similar weight/skill racer... 185lb-Vet Expert-So Cal MX tracks. First thing I thought was God Bless Enzo.... cos my simple revlauve of the stock AER felt better than the $$ spring conversion. Amazingly. the spring conversion felt very similar to my Race Tech valved 2013 forks (harsh and noncompliant). . In all fairness to Race Tech - I did not give them a second chance to fix/fine tune which I'm confident they would. But Enzo's settings are consistently right the first time for me over and over.
Enzo = Good , honest guys who stand behind their work- cant recommend them enough!
DrewJett747

I'm about to pull the trigger on shipping out a new set of Xact forks for my 250sx and I'm wrestling where I should send them. I am a Kawi dude to the bone and have been a loyal PC/Kawi rat for the past 20 years. It was always easy, pick up a new Kawi and throw everything that PC makes on it and call it done.

So, I'm switching brands and with all the WP fork horror stories I'm at a loss of where to send them. We all know suspension will make or break your love for riding. I've heard a lot of good things about the new Xact fork so I'm unsure if I want a basic re-valve from Kreft, RaceTech, PC, Enzo or MxT for $1000 or if I want to do something bigger like Kreft RC, MxT Lucky, or Enzo KYB kit and spending in upwards of $1800-$2500
walkitoff

I'm about to pull the trigger on shipping out a new set of Xact forks for my 250sx and I'm wrestling where I should send them. I am a Kawi dude to the bone and have been a loyal PC/Kawi rat for the past 20 years. It was always easy, pick up a new Kawi and throw everything that PC makes on it and call it done.

So, I'm switching brands and with all the WP fork horror stories I'm at a loss of where to send them. We all know suspension will make or break your love for riding. I've heard a lot of good things about the new Xact fork so I'm unsure if I want a basic re-valve from Kreft, RaceTech, PC, Enzo or MxT for $1000 or if I want to do something bigger like Kreft RC, MxT Lucky, or Enzo KYB kit and spending in upwards of $1800-$2500

Hey, I've since changed my suspension from the original post, to Kreft RV control, and now to the KYB conversion through Enzo... My opinion is that the KYB conversion is hands down the best for me. I love the plush stable feel. It's very confident inspiring, the front tire tracks better than it ever has. If you need more info feel free to reach out in PM and I'll give you my cell number.
CarlinoJoeVideo 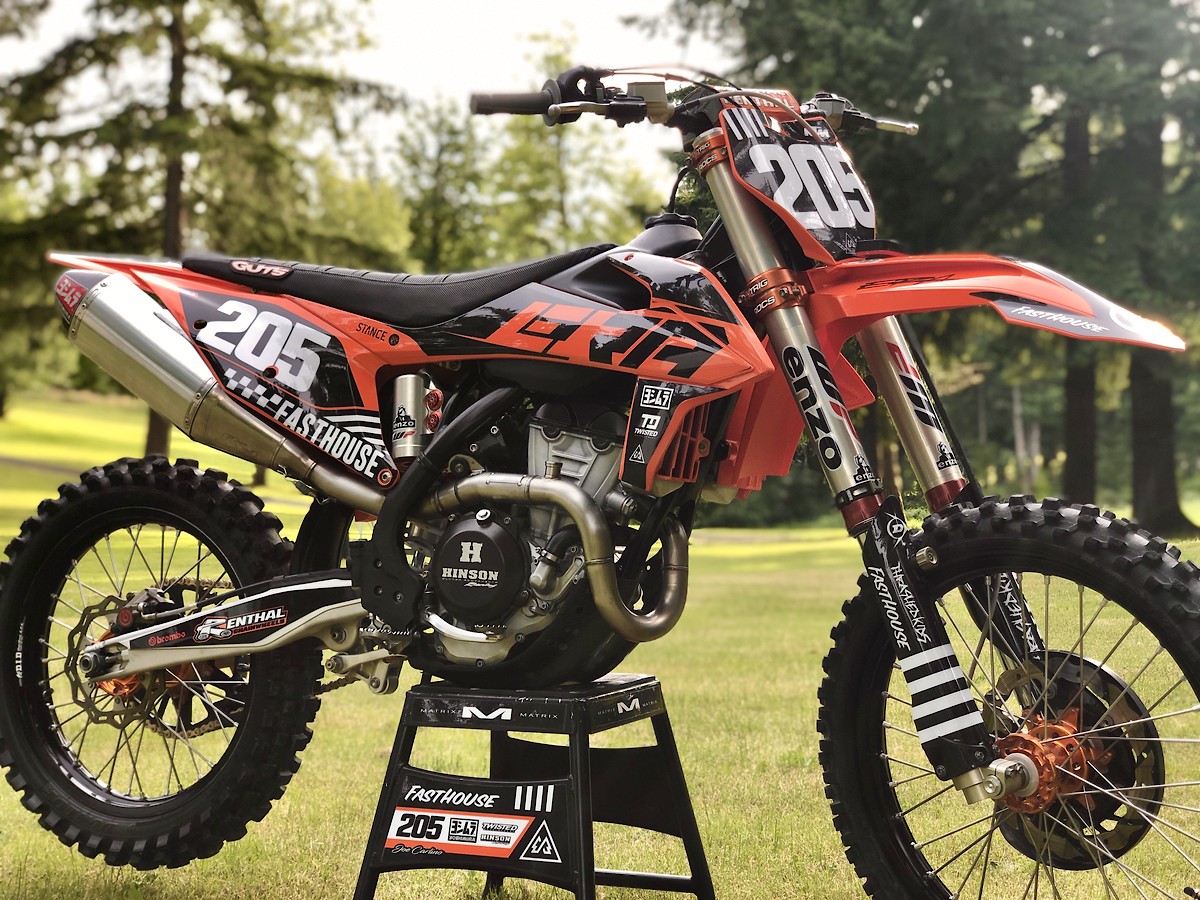 Post a reply to: WP suspension tuned by Craig Decker of enzo