Still Smokin’: Return To The Tiddler - Chapter One: Smell The Money 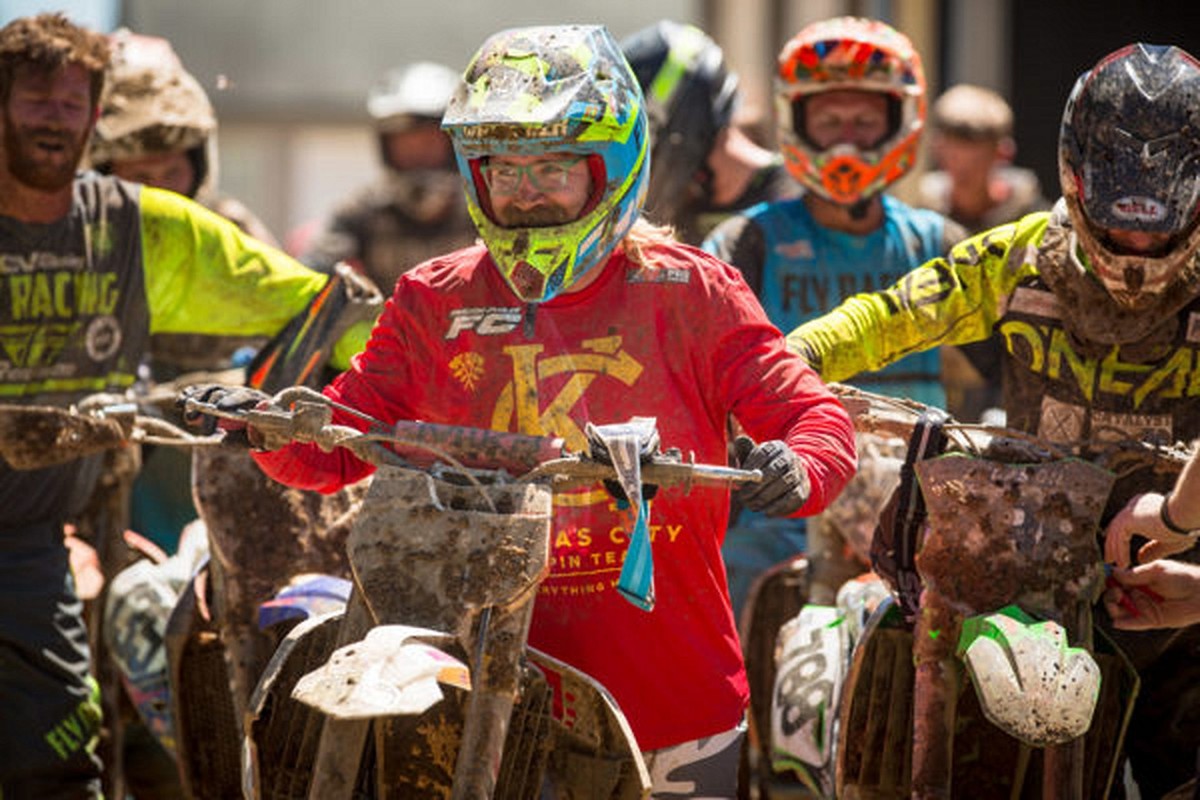 To put ones money where ones mouth is can be an opportunity to overcome naysayers or more valuably, self doubts. However it also builds expectation and demand of repeat performances from days and years long past. I’m a heavy proponent of following through with talk and more-so private thoughts. Given that I’ve been racing and riding a lot lately and the thought has come through my head “Yeah I may have been beat today but if we were all on 125’s we certainly know who the winner would be”, which is an easy way to lick my self-image wounds while feeling good about myself.

I’m a two stroke guy at heart and in early 2019 I picked up a 2018 KTM 125sx from Cycle Zone in Topeka. It’s been since 2003 that I raced a 125 yet the feeling doesn’t escape me of sniffing out that tiny but rewarding peak power output that the tiddlers produce. The two prior years on a 250sx were a blast, but I guess sinking deeper into martyrdom on a 125 was even more exciting. Now every time I practice, I am ghost racing either Primal Impulse Buddy Antunez or HRC Steve Lamson whom of which were high on my list of childhood heroes. Often times on the course I find myself thinking while entering a section “Would Lammy let off here?”

Humility aside, I’ve been railing on the 125. So much so that after not learning my lesson last year doing the Working Class Privateer tour at four outdoor nationals I now think I can be competitive, strike that, MORE competitive on this bike. 125’s are closer to 250f’s than 250’s are to 450f’s. With as factory a bike as I can get without modding out the engine I decided Spring Creek and Washougal will be my two attempts (with probability of Iron Man) for premix glory. I’ll be joining Brent and Dane Rouse and pitting out of their red white and blue Bubba Burger-backed effort for the three races, and reporting to you the science on privateer road-dog life.

In the middle of last week my dad sent me a flyer for a $1000 minimum purse in Clyde, TX at Spring Valley MX... the payout going toward the 125 Pro class. I didn’t even hesitate, I knew I was going. Being a proponent of going racing would be an accurate way to describe myself, and that adrenaline fueled tunnel vision came racing into my mind of crossing the checkers on a hot July afternoon in West Texas. Though my glory days of cashing in at races across Anywhere, USA that offered large capital return- this 125 shootout was the perfect combination of nostalgia, adventure, and risk sloshed together for a potentially high paying Independence weekend.

In the spirit of ‘76 I went alone in my single cab Ram as man and machine, taking into accord no one else’s needs, making every travel decision and last minute call on my own behest. The original plan was to practice at Oak Hill Saturday and race Spring Valley on Sunday. After calling my buddy Brice Reed to invite him to ride with me Saturday, I changed course and headed to East Texas to race in Tyler at Swan for the 5th round of the Lone Star Series. 9 hours logged from Lawrence to Tyler, I arrived at the track at 11pm and dragged into Brice’s trailer for the night. Racing at Swan is always a challenge because the location of the track provides for a very competitive and large rider base with regular names like Hackley, Winnerstrom, Moeller, and plenty of upcoming to be established talent. Overall I ended my day with a 3-4 in +25 and 2-DNF in 250 Pro, after a hard crash while leading knocked my visor to the wayside and left grip off the bike. Admittedly, my lil ego crept in and was saying “If we were all on 125’s...”

Lucky for me and the devil on my shoulder, just 4 hours west I had the opportunity to flex my 125 vs 125 skills. I packed it up and departed Tyler after collecting my winnings, pitted for Waffle House in Arlington, and meandered my way to the big sky country via I-20 WB. Gates opened 6:15am at the track and I planned my agenda to arrive then and start bike prepping. I found a dark wayside about 20 minutes from the track, and camped across the buckets in my cab. In all transparency, had I not thrown away the lead in the second 250 Pro moto earlier in the day I probably would’ve got a hotel but I couldn’t justify the expense when I didn’t come through clutch during the race. Win and get a queen size or lose and get cloth seats with a pillow made of rolled up t shirts.

Sunday’s race was held at aforementioned Spring Valley MX, a great family-club type track with a sandy base and safe obstacles. Bryan Jackson is the track owner, Guinness Record holder, preacherman, and hardcore two wheel enthusiast. It takes a warm heart to put up large cash for a 125 Pro class, and his charitable personality is palpable as soon as you get a Texas sized smile and handshake. Meeting race promoters who are this enthusiastic about local motocross brings a lot of hope into my admittedly bleak outlook on the future of action sports as a whole.

I raced two classes, Open Pro and 125 Pro. The handful of other local A riders participating in the day were average 10-12 years younger than I am- which gave me a very distinct advantage: racecraft. Yes I have the ability to go fast, but I will sell the reason I won both classes on the back of my moto-PhD. Open Pro was a barn burner and riding a 125 against a gate of 450’s required a lot of outfoxing. I had to come from behind in both Open contests for a 2-1 moto score, and found inches on the insides akin to Sherlock with a magnifying glass. The tall money was in 125 Pro, which I scored a 1-1 for my biggest payday since the mid 00’s. Green to checkers was all 681 Lectron/Tubliss/ProX/Cycle Zone KTM, but understand the whole weekend was riding on 14 laps and those cycles around the course were nerve wracking. I had to go fast enough to win, but ride smart enough to diffuse jeopardy, and after the dust settled I made enough to pay for my entire Spring Creek to Washougal run.

After my 125 Pro moto one win, Bryan asked me to come into the announcing tower for his Texas faithful regulars to get familiar with me. “Jeff why would you drive 9 hours, Kansas City to Clyde, and race at Spring Valley?” he asked chiefly. Without hesitation I coined, “I could smell the money.”


If you're a fan of my work, pick up my merchandise from the link below. If you will be at Spring Creek or Washougal, come by the rig and pay $25 for a photograph with me and get a free T shirt- as we are not allowed to sell merchandise at the races.

I will be posting the remainder of this series on Swap Moto Live, so look for the links to be produced in their own respective thread after each race. 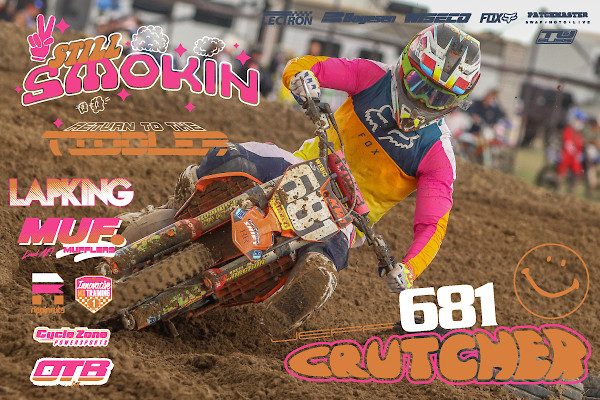 I love that track. High speed and amazing soil. Plus the facility itself is just kick ass.
I'm thinking about coming down this year and doing the pro challenge for the first time.

mx131 7/8/2019 8:52am
7/8/2019 8:52am
I enjoyed meeting you briefly at Swan on Saturday, you started next to my son in one of your motos and we talked about the Tubliss sys. My son was blown away that you beat him off the start on the 125. Will be rooting for you in your national attempts and hope to see you back at Swan for the Pro challenge
kevin.decker.125

I'm a fan! Good read. Good luck at Millville and Washougal. Probably will see you around at some of the races.
Jeff_Crutcher

Mx391 wrote:
Do you race with glasses on?

Yes sir I do. I only wear plastic frames and lenses without traditional/metal nose rests. I’ve tried contacts but they’ve fallen out before and frankly I just dig glasses.
mattyhamz2

Good luck at the nationals this year!
braaap707

braaap707 wrote:
Loved watching ur series last year Jeff. Good luck this year on the 125 against the fart boxes!

What series? Anyway to catch up.
WDSRCR

Your name seemed familiar to me, possibly from back in the day, but I had not ever really heard of you until seeing your posts on here after my return to dirt bikes in 2015. Your writing and posts have definitely made me a fan!

I look forward to more.

Post a reply to: Still Smokin’: Return To The Tiddler - Chapter One: Smell The Money