Processing out the interview we just wrapped up with Dave Prater (Feld) and Carrie-Jo (MX Sports), here are some cliff notes until I'm finished with it.

1. The $10 million purse will be spread across all three entities. A portion is going to rasing the purse at SX, a portion to the National purse, and a big chunk is towards the SuperMotocross World Championship at the end. The final split hasn't been decided but it sounds like it'll be wrapped up by October.

2. Where did the money come from? We were told the additional $10 million was achieved primarily from media rights value of the combined series and new playoff championship. The TV contract, streaming and media rights of all three series are being pitched as one entity and the combined value of this deal will be the primary funding for this purse bump, along with additional income from series sponsors across the three championships. The media partners they're speaking to suggested the playoff series idea to create value for the series and create the added purse amounts in return.

3. Speaking of media rights. Yes, the series will be under one roof in terms of TV and streaming deals. All three championships will have the same home as a combined deal.

4. The Playoff series will sorta be Nascar-esque. Your results in each series will effect how many points you start the playoffs with. They said it's likely someone racing only one series will score enough points to qualify for the playoffs but riders who complete both series will likely have a better points starting position in the playoffs. So riders could still go SX or MX only, but it definitely promotes riders to stick to doing both series.

5. The OEMs are all in favor of this as long as the race series doesn't grow beyond what's being announced. So in prior years, between 17 rounds of Supercross, 12 Motocross Nationals and one off-season race (US Open then Monster Cup), the race season has been 30 events. This new setup will be 31 events: 17 Supercross races, 11 Pro Motocross Nationals, Two playoff races, One World Championship round. It sounds like if the playoff series were to grow any further, it would require a reduction of events from another series.

6. We conducted this interview with Carrie-Jo and Dave as they sat down for an OEM meeting, so every OEM rep got to listen to my terrible interview skills hahaha!

7. These combined ideas are one of the main reasons that Feld decided not to re-new with FIM going forward. This was in the works prior to the SX Global / World Supercross Championship being announced or even in planning.

8. Motocross of Nations. Both Feld and MX Sports have been in contact with In-Front (MXGP) about these developments and the MXGP group is all for it. It will allow MXGP to push their schedule back and spread their events out a little. As the new goal will be for MXGP to race through late September and into early October...with a Motocross of Nations to follow the MXGP series and SuperMotocross series conclusions. Hopefully this means rider's excuses for preparing for Monster Cup to end.
|
whatjusthappened??

If they're going to create an alliance to promote SX/MX as one, the riders should race both series to qualify for the 3 round championship.
DonM

If they're going to create an alliance to promote SX/MX as one, the riders should race both series to qualify for the 3 round championship.

It sounds like it be quite extreme. They're still working on the points structure but it sounds like you'd have to finish top two or three in one championship to have enough points to make it straight in without racing the other championship. But your points starting position in the playoffs would be heavily effected if a rider went this route, with a much worse starting positon.
crowe660

RDT wrote:
How many #1 plates? Will #1s become like single digits now?

Hollywood009 8/2/2022 2:03pm
8/2/2022 2:03pm
where are they anticipating holding the Supermotocross playoff rounds? Being late September, most football and baseball venues would not be available, would NASCAR tracks or even COTA be an option?
ML512

They wouldn't say at the moment but it's extremely likely that Circuit of the Americas in Texas is an option, Charolette or Atlanta Motor Speedway are options...and the finale will be at the LA Coliseum.
early

Thanks ML, exciting stuff. Hope it works and ultimately we (the fans) are winners here.

Plus, no more Pala ll
kopfjaeger

Geeee golly. Look at that.
danzig138

Thanks ML, exciting stuff. Hope it works and ultimately we (the fans) are winners here.

Plus, no more Pala ll

I made the Prestige World Wide joke to a buddy earlier. I love Step Brothers.
ML512

TXDirt wrote:
So the streaming rights do have value…..

Geeee golly. Look at that.

The entire media rights package has a value.
aeffertz

One of the worst ideas I’ve ever heard. Bravo!
ricko

ricko 8/2/2022 2:45pm
8/2/2022 2:45pm
So if pushing back schedules and des nations to be after mxgp and them racing into October for us to host des nations again it won’t be held at a northern track as weather gets pretty crappy that time of year.

Probably a different color background that they would run all year...
RichieW13

Hammer 663s 8/2/2022 2:50pm
8/2/2022 2:50pm
I sure hope they schedule this so that there are regular recovery breaks for the riders/teams. Bye weeks every 4th round or something. Super/Motocross is a meatgrinder as it is and everyone is injured at some point during the year. 31 events for elite athletes is a lot. What other sport has this type of risk/consequence and does 31 events a year? American Football is just as brutal and they do less than 20 with bye weeks and a long off season.

I'm looking forward to see the payout for 1st thru 20th for each event type. Pay the guys who put their @sses on the line every time the gate drops.
jake721

jake721 wrote:
Well this is one way of solving the issue with two Mx races at Pala.

The second race at Pala was likely scheduled as a place holder before they drop to 11 rounds.
-MAVERICK-

Most likely. I know up here the Triple Crown Series Champion had a gold border around the number plates.

-MAVERICK- wrote:
Most likely. I know up here the Triple Crown Series Champion had a gold border around the number plates.

That would be awful....🤮
soggy 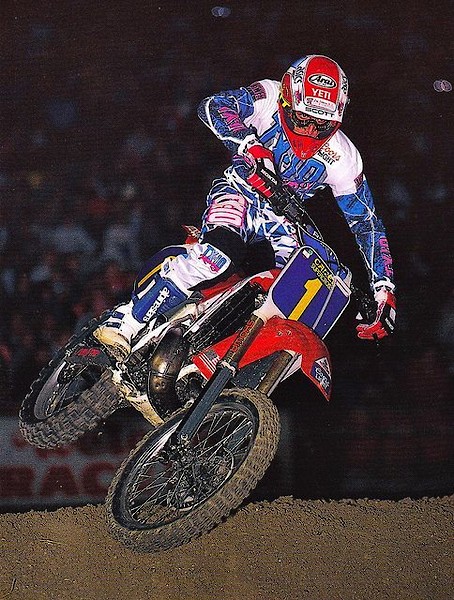