The shorty is def gonna be awesome just a little work to make it fit right. Eventually Id like to machine a whole new bracket for the can and rivet it on but that is a ways down the road. I tried to make the silencer fit with my old pipe and it did not come close to fitting, couldn't even get it on. Pretty happy that it fits now with the 18+ pipe.

Hard Enduro on instagram made his own shorty on his. He took the longer 16+ ti2 and cut like 3 inches off it. That was my plan if I didn't get this one of ebay.
burns 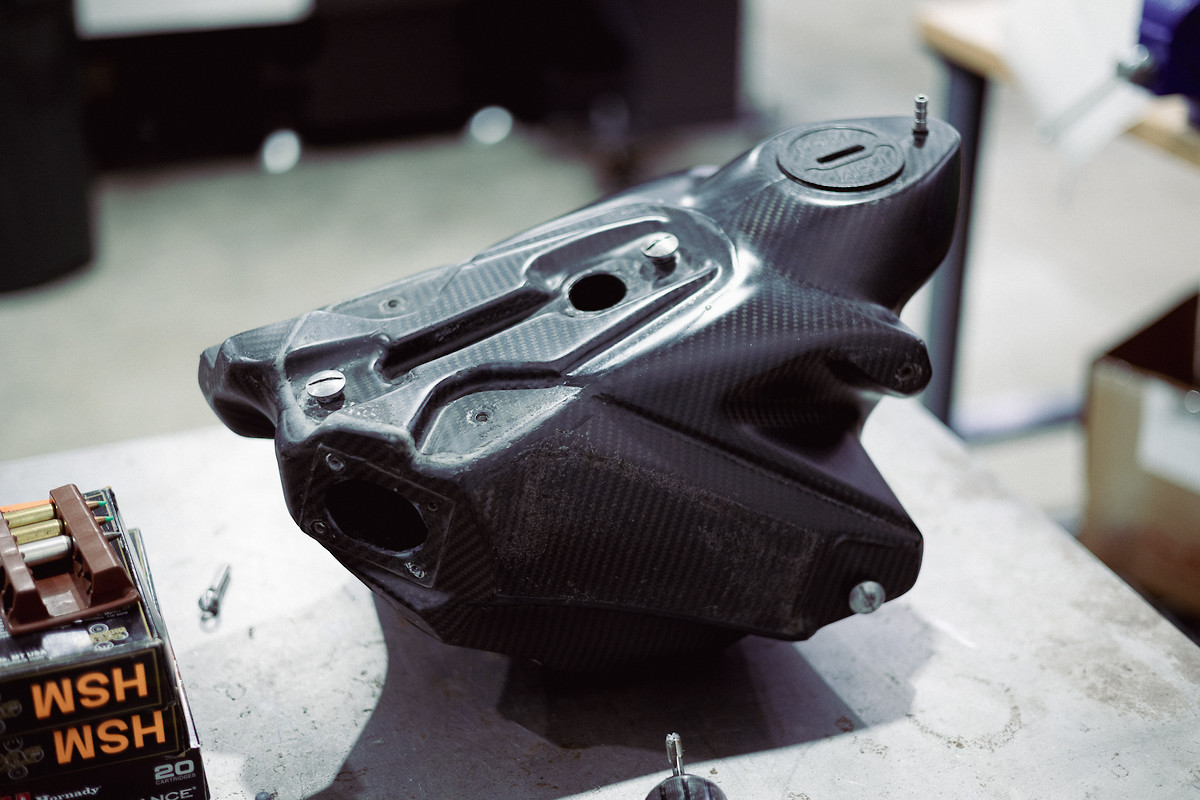 Picked up this CRM carbon tank from a member on here. You may notice it is not for Gas Gas plastics but for KTM. It is also for fuel injected bikes. Now the idea to convert this bike to TBI has crossed my mind many times and I have come close to buying parts I love the simplicity of almost 0 electronics. So the bike will stay that way.... Atleast for now, if you haven't noticed I do change my mind quite often.

To make this tank work for me I machined this little adapter. I am waiting for barb fitting to arrive tomorrow but the open hole will be tapped for a pipe tap and a barb fitting will go there so I can run a hose to the carb. 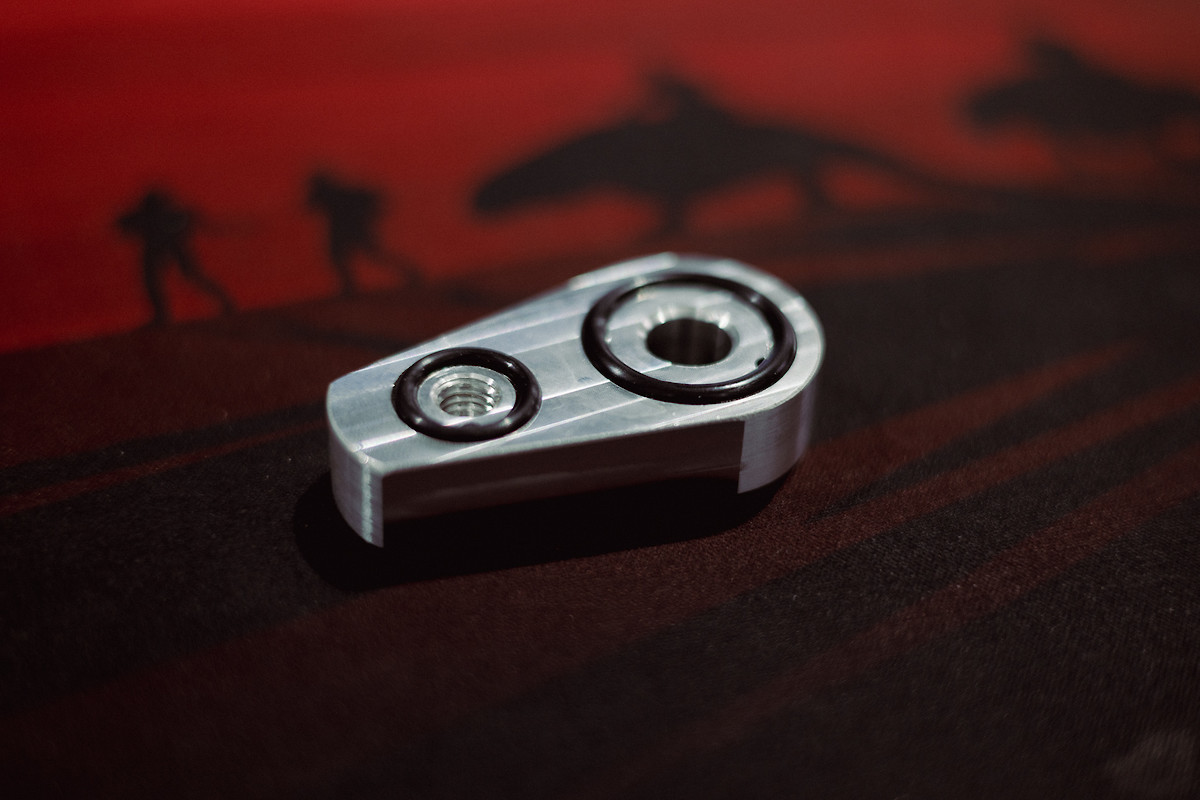 Here is how it will sit in the tank. Ignore the bolt and washers, those will be replaced with a flanged titanium bolt. 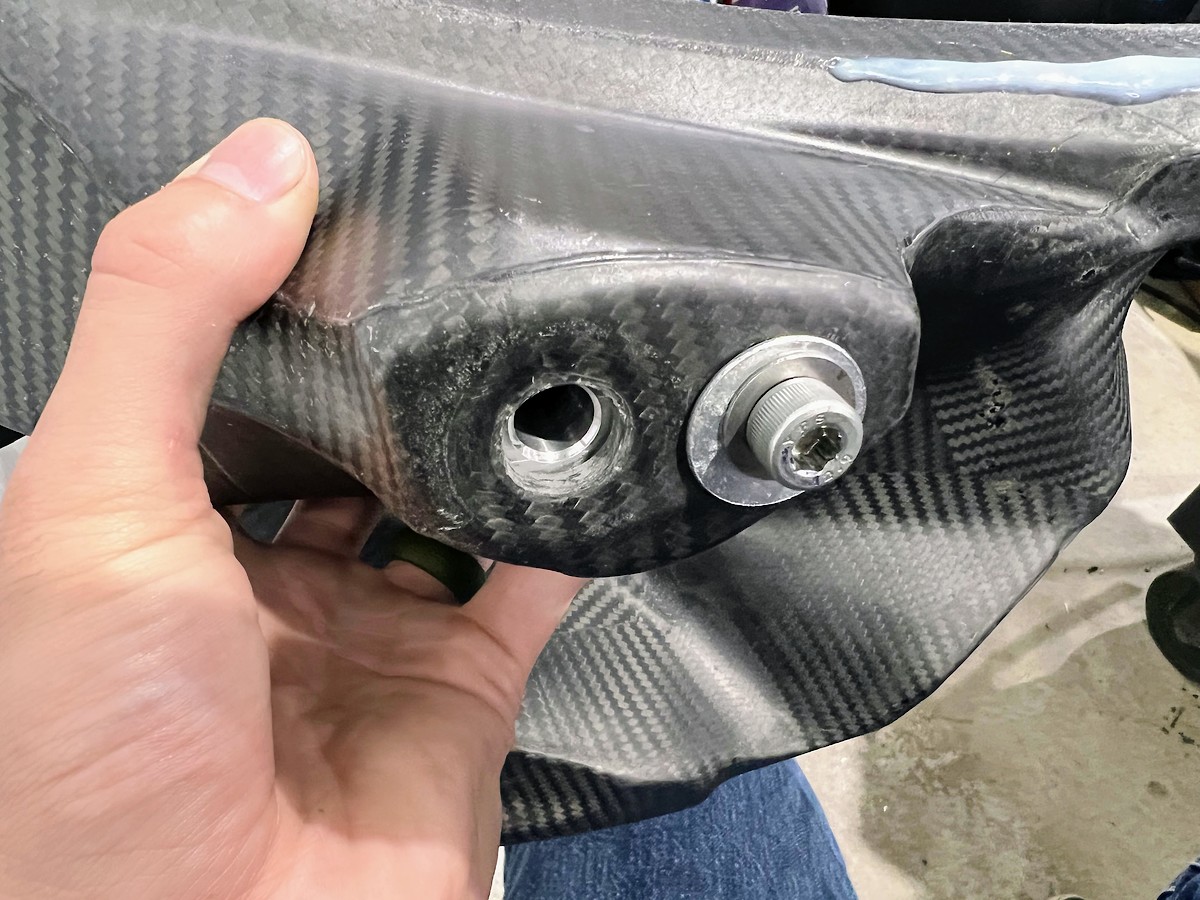 I need to make a plate to cover the back hole for the fuel pump. I will make that tomorrow then get the tank all buttoned up.

thanks man! I am super stoked on the tank!!

Here is tank mounted up with some new plastics.... 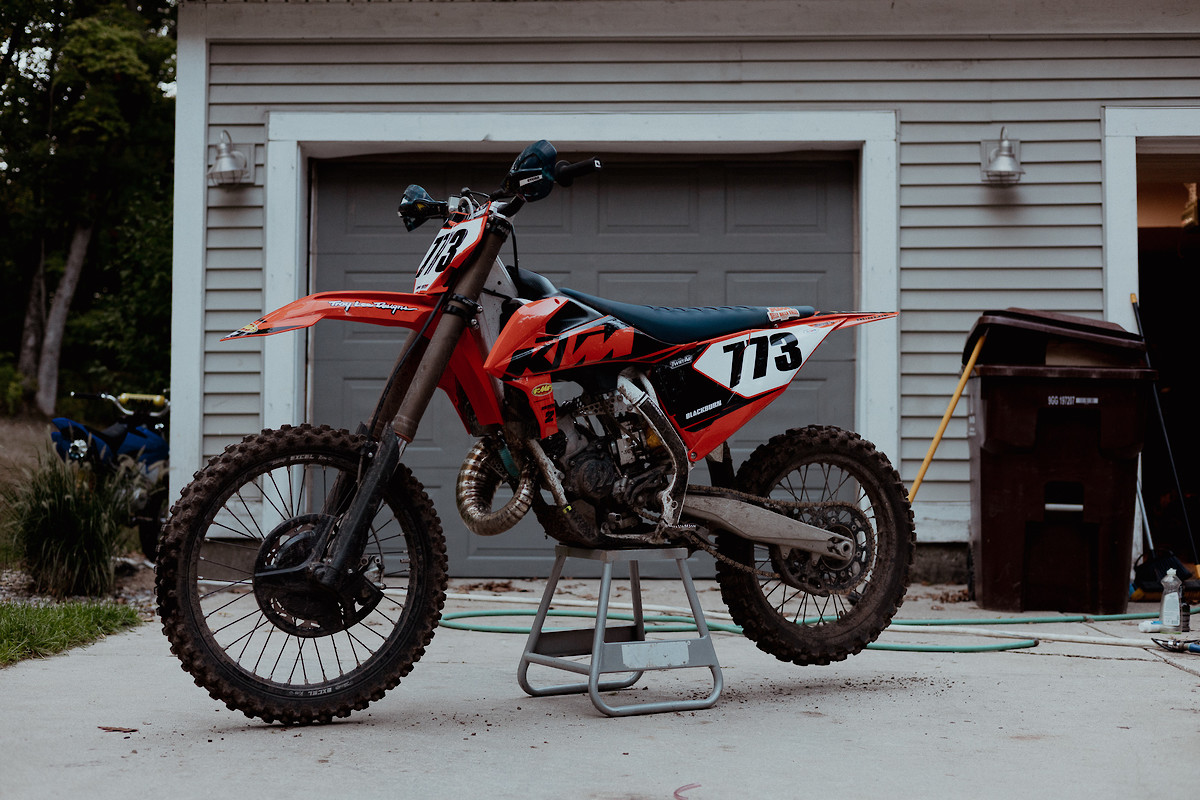 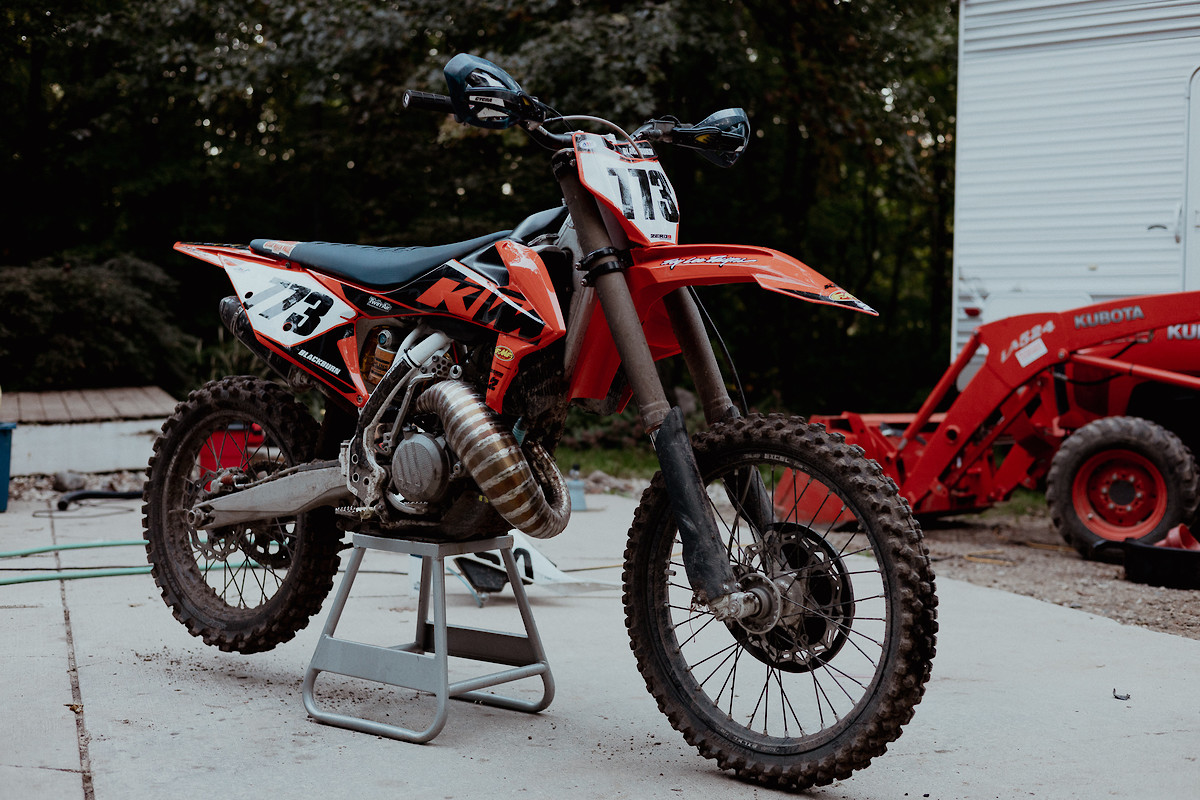 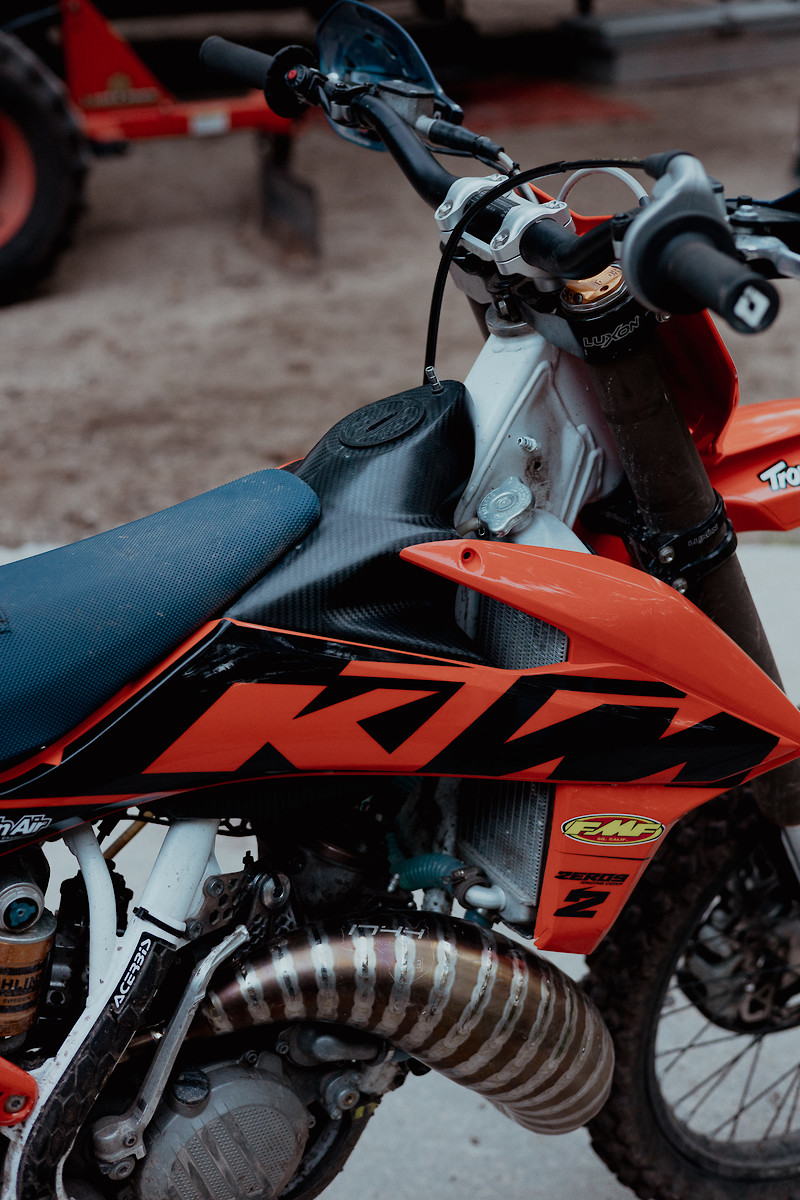 next on the list is black seat and new hand guards. This winter frame will get done in silver and forks will get redone so that they arent brown
burns 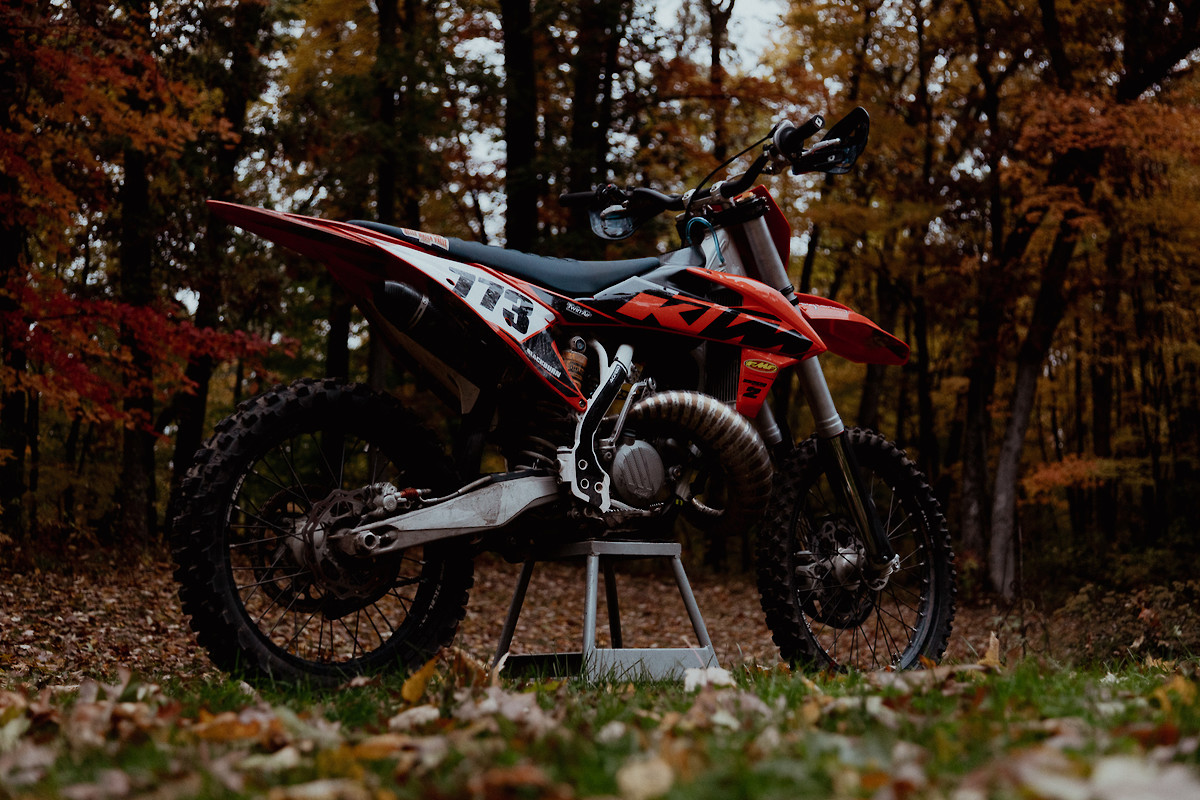 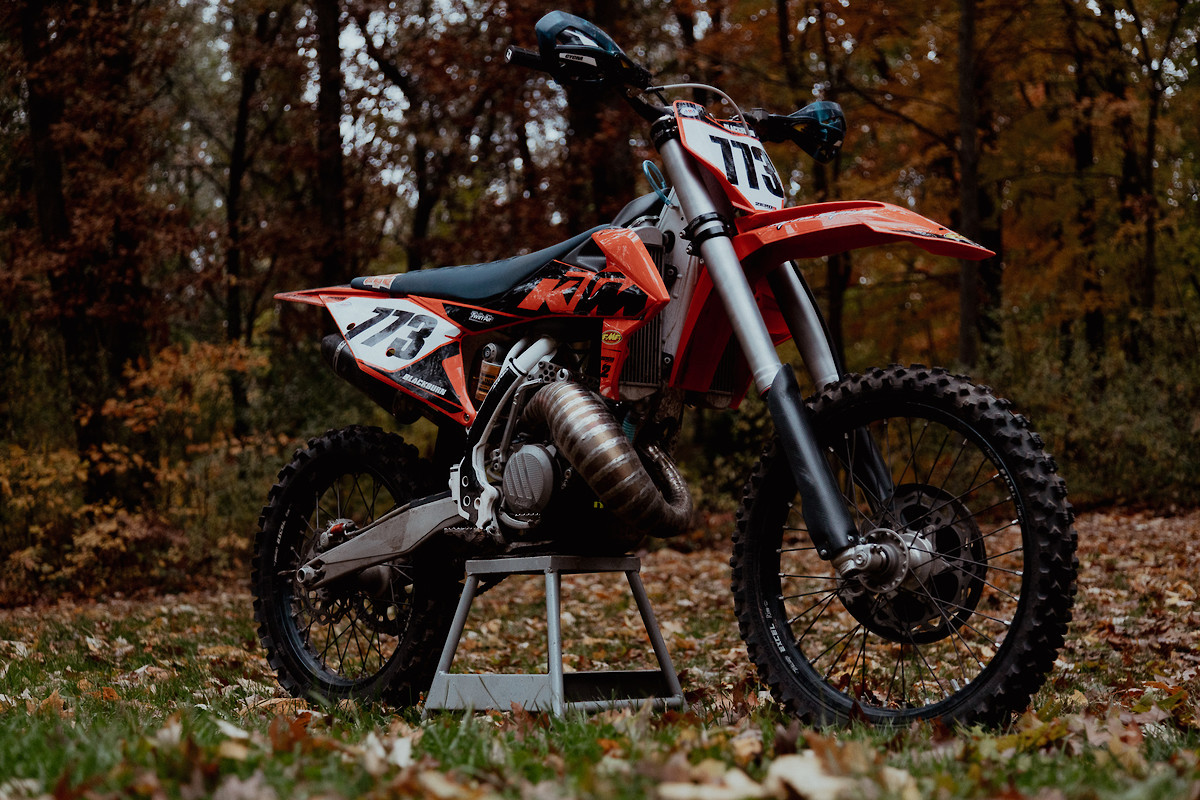 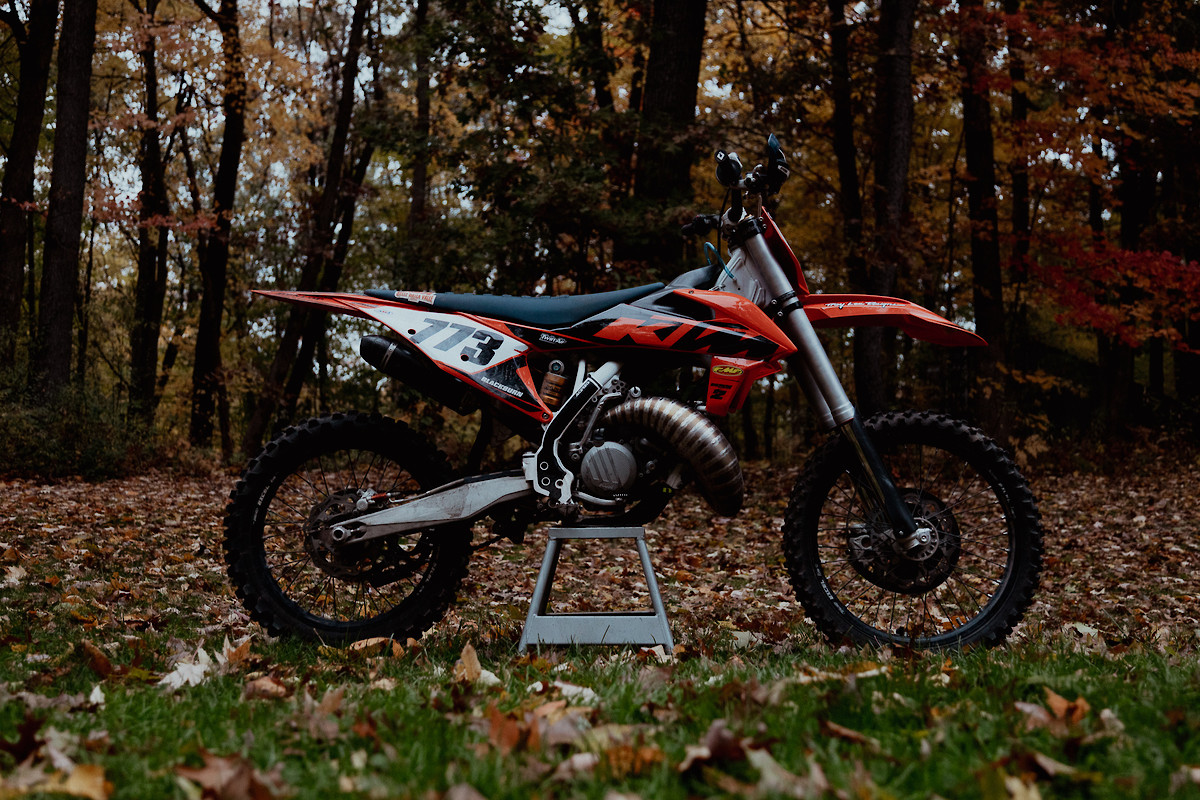 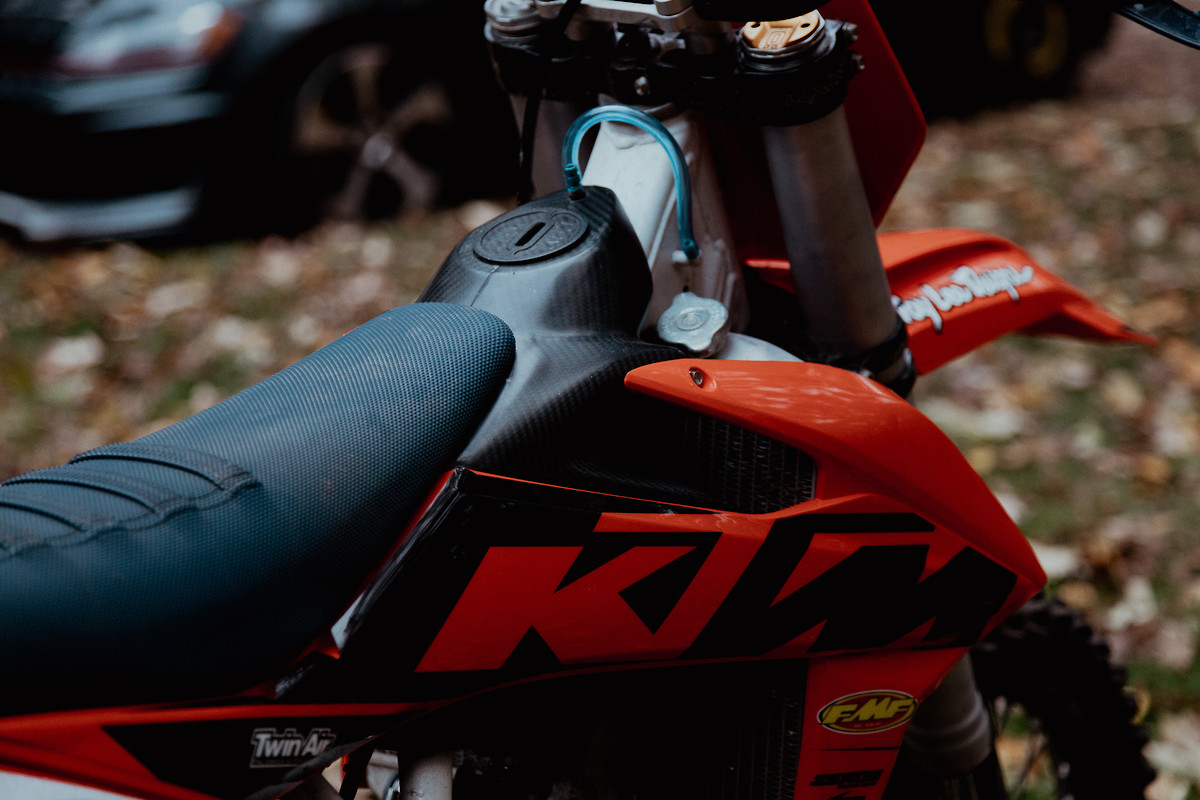 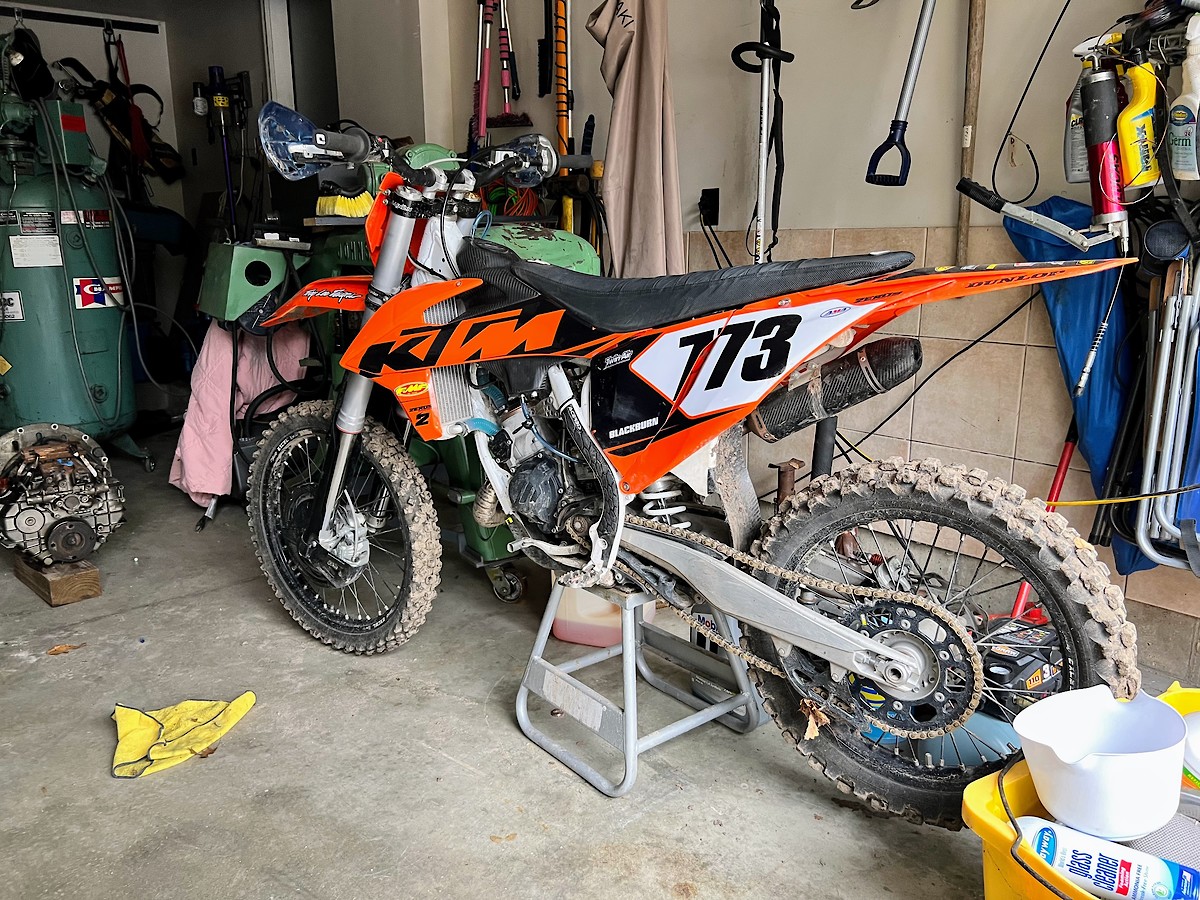 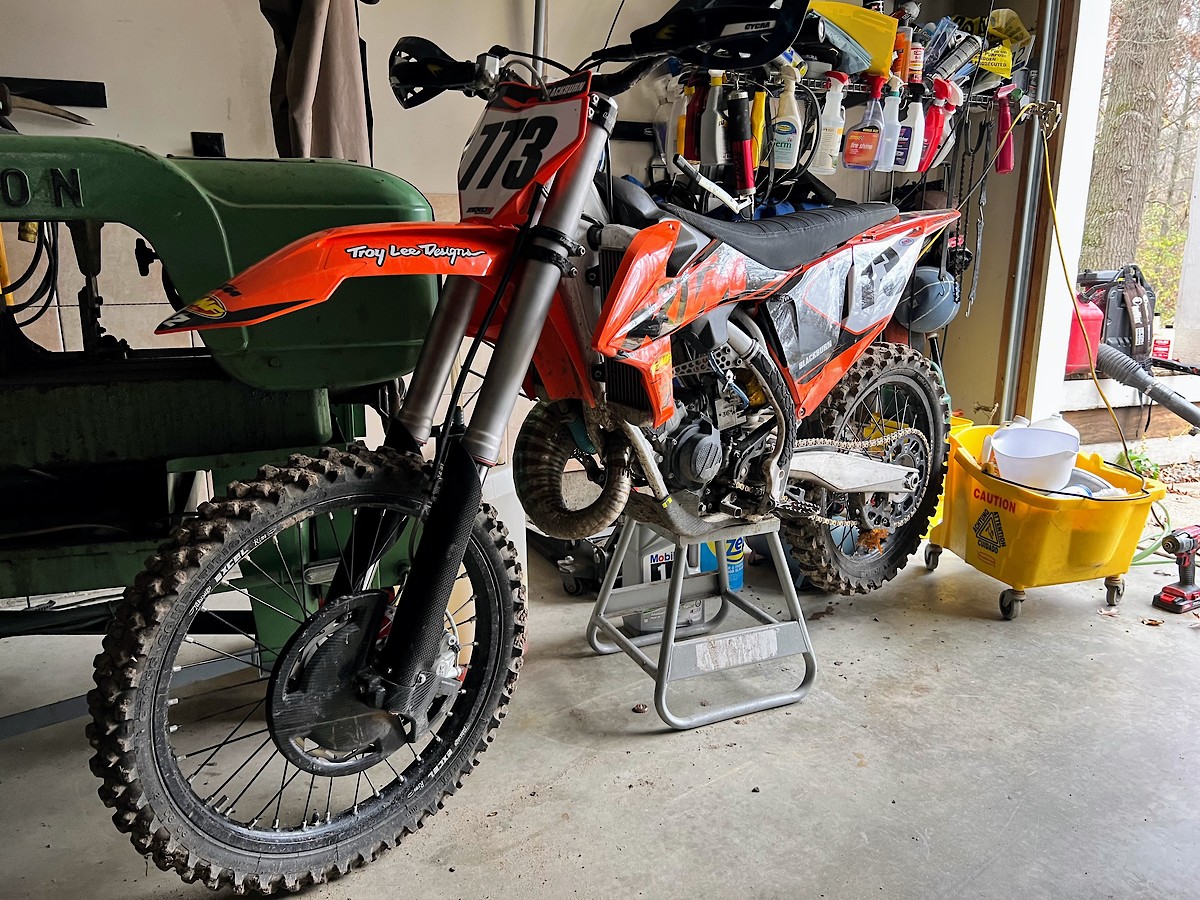 snow is here so this bike is gonna get torn down completely again for winter. nothing crazy getting done this winter. pretty happy with where its at and been working on mtb stuff instead at the moment.

Do have these super trick levers coming though. Ive got a ton of Hope mtb stuff so crazy stoked on this bois 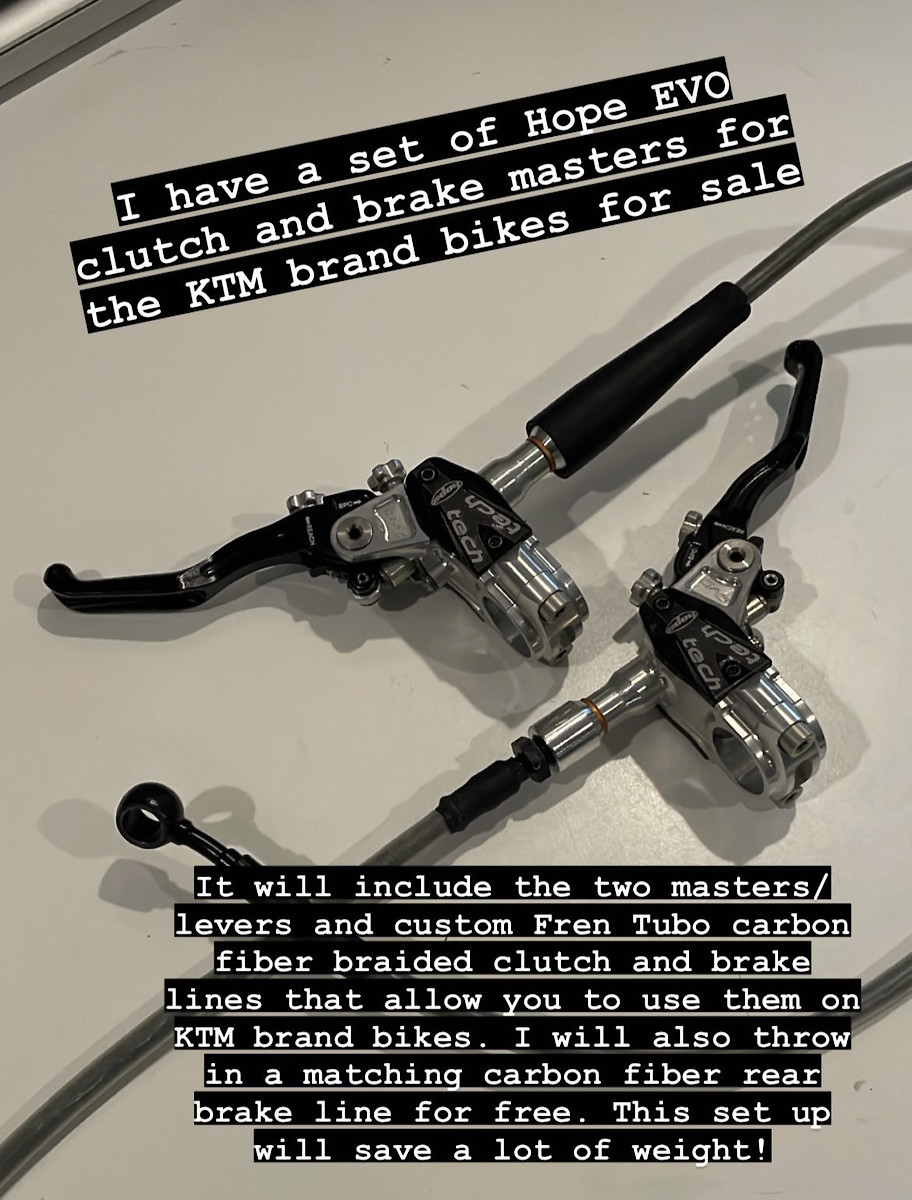 Look, when I first put a Rekluse on my 500, way back mid 2000s, I used a Hayes Mag Master Cylinder for my LHR brake. I worked with the Hayes importers, and, the Mag had a bit more fluid capacity with the bladder than most MTB MCs. Keep that in mind - MTB MCs have less fluid capacity than Motorcycle MCs, so it's easy to 'run out of fluid', as say, brake pads wear - also, less room for expansion of fluid through heat - both Important for either Brake or Clutch usage.

The Rekluse was all about getting rid of the foot brake (legs are f**ked), and getting the brake up on the bars. I rode without a clutch for a while

, until I put a succession of mini clutch levers on the CRE.

Here's a picture of that set up ( with the final long lever I machined up - it being needed for power) : 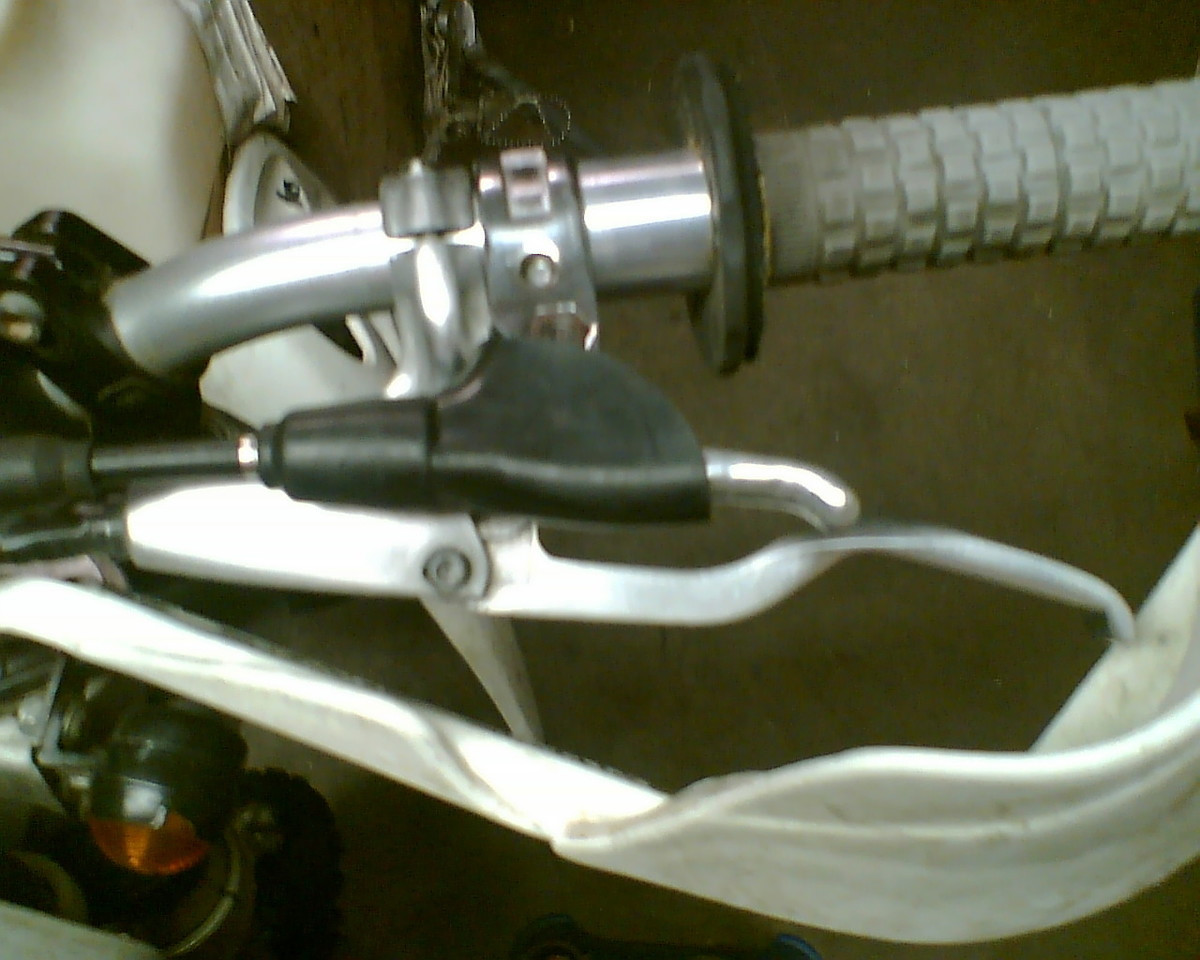 And, a picture of the various levers tried - 1 Std, 1 extended Hayes Lever, and top, the machined up one - longer and with a subtly different pivot and 'push' point ratio : 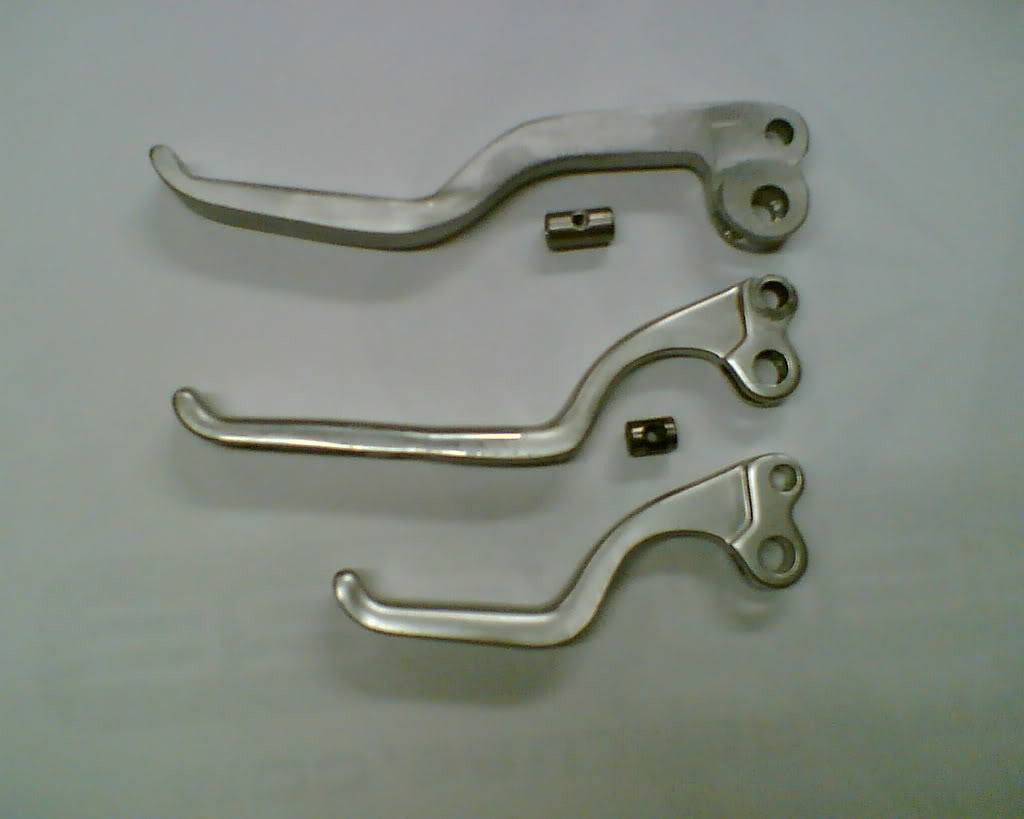 This is to say that It may not deliver decent brake and clutch performance, be it through MC size, and leverage ratios through pivot and 'press' positions, or Lever length.

I eventually fitted a Brembo MC, with 2 very 'Bear'd' levers I made so I can use Both Brake and Clutch levers at the same time, with no idiotic / hampering contortions - how people use many of the double lever sets ups they fit, I do not know : 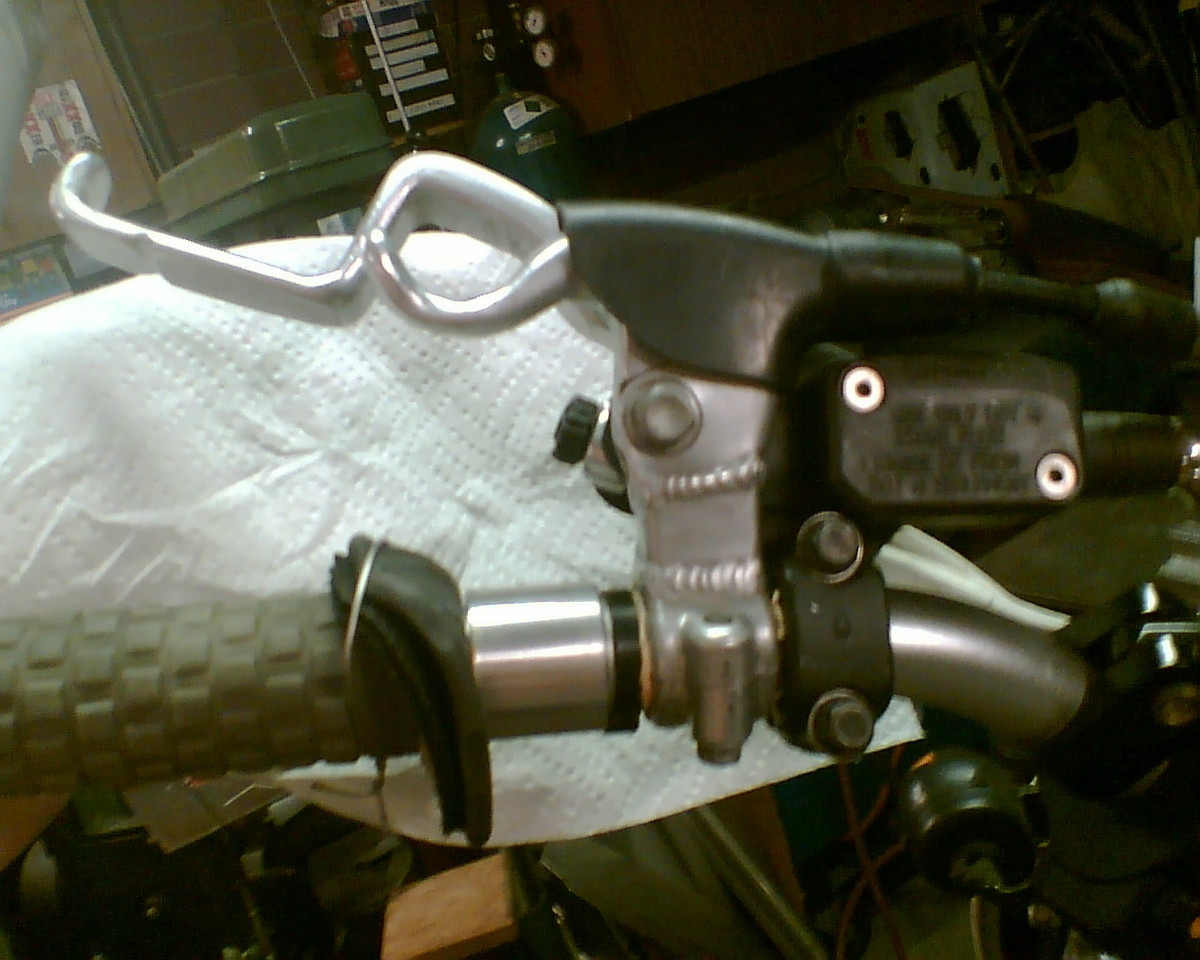 Don't get me wrong - Hope Products are Superb! . I now use them on my Bicycles - and just got a set of the latest DH brakes. But bloody hell, if they did work OK on your KTM, you'd bloody well want to be running full wrap around Hand Guards, as, as well made as they are, I doubt they'd take much of an impact to be damaged. I've broken them on my DH bike, and that's with teflon tape under the clamps, with the clamp bolts held with 222 Loctite, to allow movement, without the bolts coming loose.