"If I Were to Race Nationals on the 450, Nobody Would Really Care" | Matt Burkeen on Racing the 2 Stroke 2

Privateer Matt Burkeen tells us why he chose the 2 stroke, gives some racing stories that make his vlog incredible, and more. 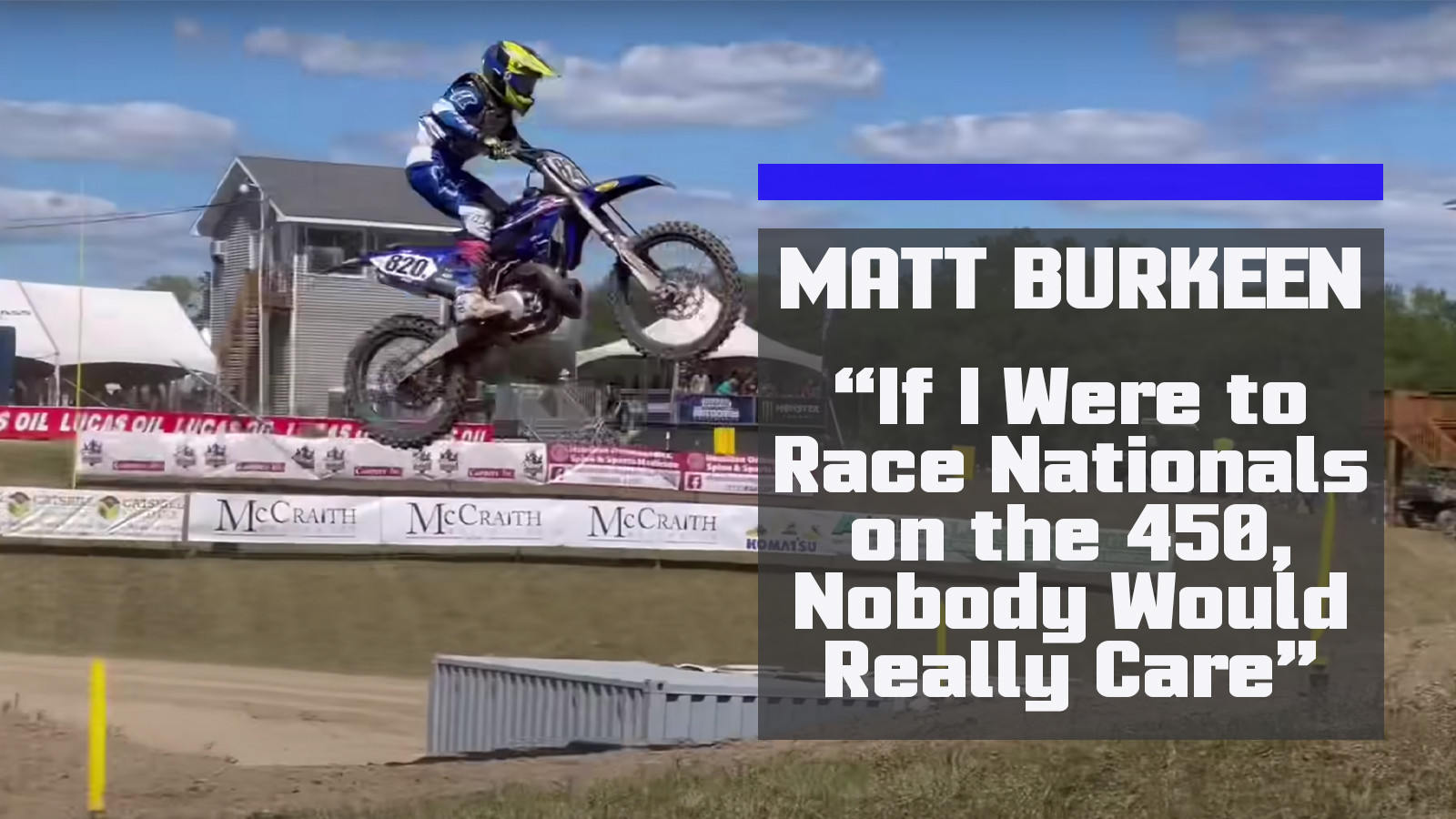 The characters that make up the privateer pits at a pro race is something out of a novel. You never know what stories you may hear about their struggles or day to day lives. Matt Burkeen is no exception. He’s been traveling the country with his Yamaha YZ250 two-stroke and capturing much of it for his vlog. If you don’t laugh at his stories, you may need to see a doctor.

Jamie Guida - Vital MX: I want to start off with your Vlogs. That’s how I discovered you and they are funny. Really good stuff.

Matt Burkeen: I appreciate it. I actually just do the vlogs on an app on my phone. For Unadilla while my girlfriend was driving, I was just editing on my phone in the passenger seat and that's usually how I would do it. It's honestly not anything too extravagant. But growing up, when I lived at a training facility where my bike was broken, I would film people all the time just for fun. It's something that I really enjoy doing

Vital MX: This year you've made six of the outdoor rounds, but you haven't raced outdoors since 2018 and then before that it was 2014. Why the gaps?

Matt: So, 2014, I think I did six of them on a 250F that needed work. But we did what we could with what we had. And that was straight out of amateurs. It was supposed to be my ‘A’ class year. We figured we're going to have to spend all this money to race, let's go race pro, you know, kind of screw it at that point. And then after that, I was supposed to do some supercross and I had a few injuries, and I was over it for a few years. I actually took about a year or two where I didn't even really ride at all. I went to community college for a little bit, and then in 2018 I was working at South of the Border helping train kids. I did Muddy Creek in 2018 because I was wanting to do a two-stroke race that they were having at intermission that day. And the two stroke that I was supposed to ride, the kid blew it up two weeks before the race. So, I last second was like, I have my 450 and Muddy Creek's one of my favorite tracks, so why not try? So that was where the 2018 one came from. And then I ended up going back to school at a university to do business, to do marketing. Shortly after the Nationals I got a Suzuki 450 for the good contingency money. And sorry to all you Suzuki fans out there, but I really did not enjoy it. It actually made me kind of quit again for a while because I just wasn’t gelling with it. I quit again for another year and then I got the two stroke. Ever since I got that, I just have been having more and more fun and getting more and more comfortable on it. 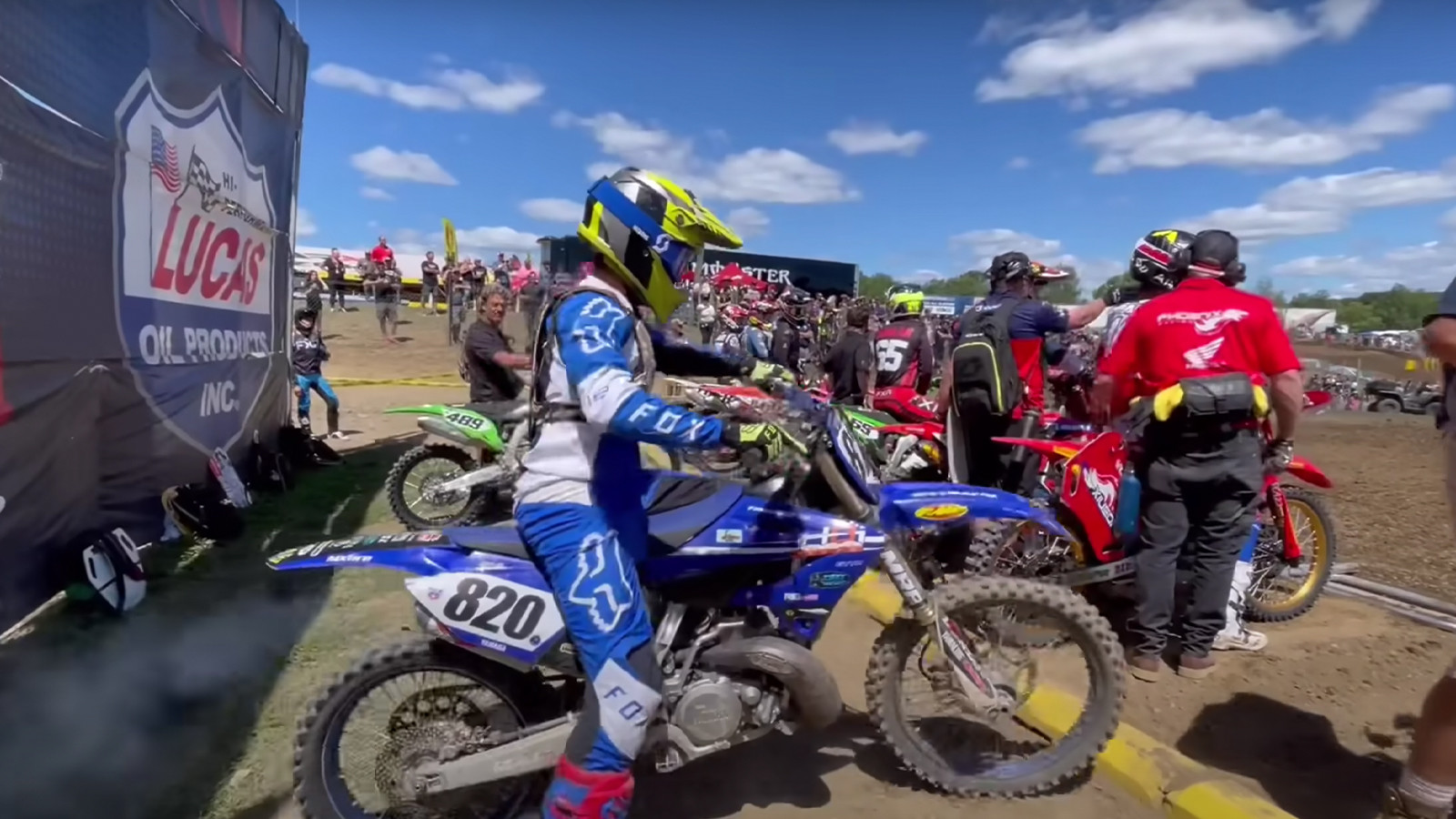 Vital MX: Well, I was watching your vlog from the Pro-Am at Doublin Gap, and I feel like you got worked by a guy on a Suzuki.

Matt: We all got worked by the guy on a Suzuki. He was ripping, a kid named Chase Yentzer. He was actually riding for the Bar X team; I think for the last three or four outdoors. I think he just came out of amateurs. His family actually owns that track, too. I think we were going to have a tough time with him regardless, no matter what he was on.

Vital MX: Your program is very old school privateer. You throw your bikes in the back of what ever beater truck you have available and go with your girlfriend or her dad.

Matt: Yeah, that's honestly the only way we really know how to do it at this point. A couple years ago I was kind of over it again with racing because I was just going everywhere by myself, you know, doing everything solo and hitting the races around the neighboring states, just doing everything alone was kind of getting old. When my girlfriend started coming to the races with me and then her dad also being the ultimate hype man, it kickstarted what you guys are seeing today. I really don't think that I was ever this fast, even growing up. I really think I'm at my best right now. I still have some things I need to iron out because obviously my results were not good. But I really think as far as raw speed and how I feel on the bike, I really don't think I've ever felt better.

Vital MX:  Your girlfriend’s dad goes sometimes to help and he’s a superfan of the sport and is excited about seeing the top guys. It’s really entertaining.

Matt: I'm surprised he didn't get kicked out, to be honest with you. As I was reviewing the footage on the way home from Budds Creek, I was like, “Dude, I don't know if they're going to want you back at Ironman”. I come off the first practice and he's like, “Oh, dude, you're going to love where I was filming from”. He goes, “I got escorted off, don't you worry”. He was in the infield with team managers, just hanging out, filming, just having a good time.

TJ Smith – MotoXpod Show: That's awesome. Did you run the whole season on the two stroke?

Matt: I did. I did High Point through Ironman.  I skipped Southwick because I figured if I went there, I was going to blow up my bike. And so instead, you guys are going to love this, I went to a money race in Ohio and blew my bike up there.

TJ: Is that farther from you in Ohio?

Matt: It was a bit closer. It's close to where my family's at, so I was able to see them too. I should have vlogged that one too, because a buddy of mine that lives in the same town as me that also rides a YZ250, he and I went up there together and in the second lap of practice, I don't know what happened to him, but he endo’d and got knocked out. It was just this whole gnarly ordeal, me having to go to and from the hospital the whole night Saturday after racing. And then Sunday I blow my bike up. And then the craziest part of all, it was almost an even bigger disaster, because my buddy, we took his truck and the next time he drove it, the truck seized up on him. 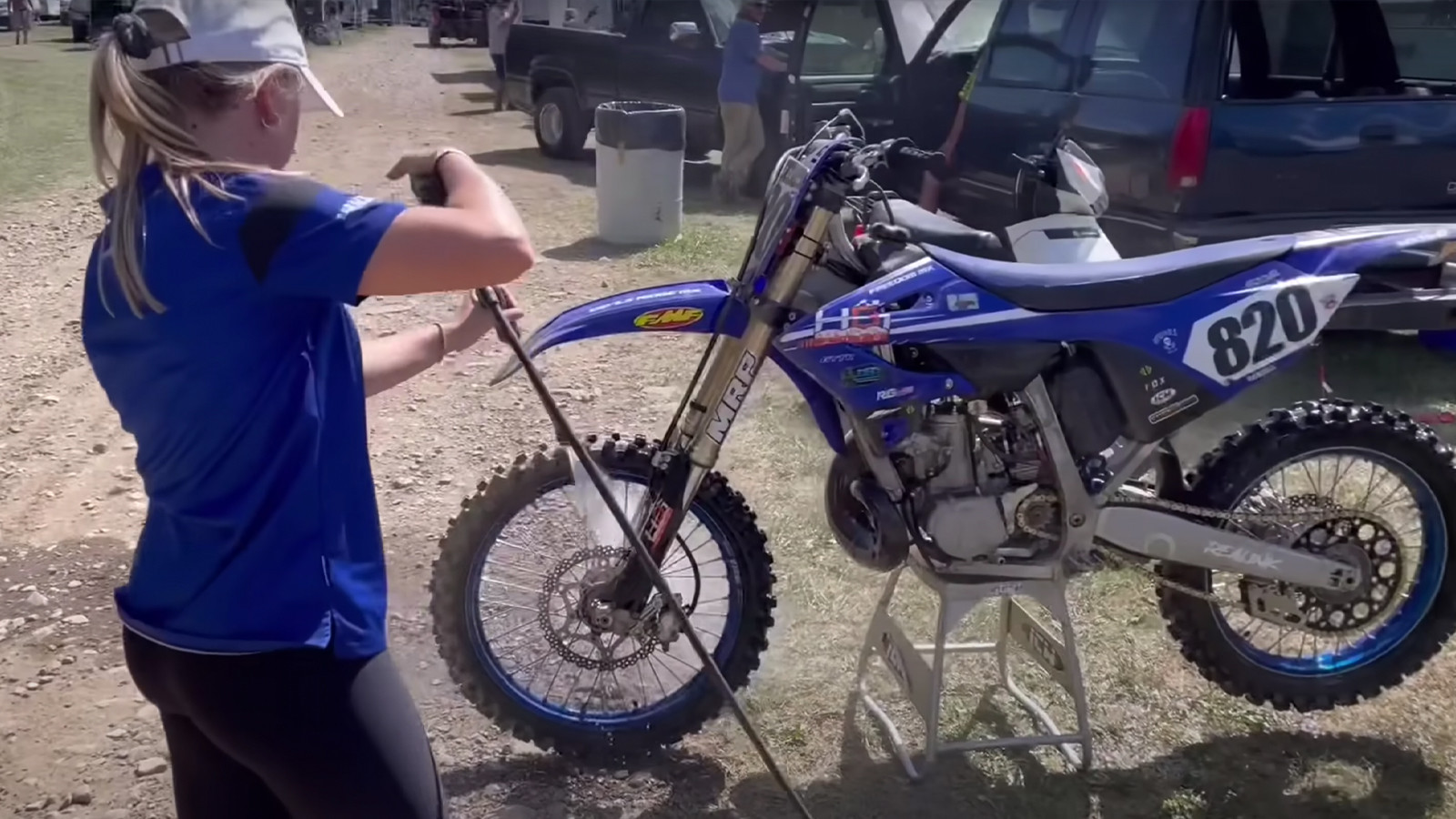 Vital MX: TJ, in the most recent vlog he takes his girlfriend's dad's truck to go to this money race. It ends up being a mudder. He crashes like five times. He doesn't make any money and his girlfriend shuts the door of her dad's truck and it blows the rear window out. He's having no luck. Dude, it's almost like a comedy.

TJ: So, Matt Burkeen needs to start a reality show of how 2022 went.

Vital MX: He already has one, just watch his vlog.

TJ: Do you feel like the two stoke revitalized you and got people behind you? Do you feel your results could have been better on a 450?

Matt: It's interesting you ask that because right after the season was over, I actually got a used Yamaha 450 just to race at money races in the Fall. It's a lot better for the start and that's where I struggle racing the two stroke. But I don't have a ton of time on the 450 just yet. I feel like I'm really, really similar speed but it's a lot easier on the 450. If I were to race nationals on the 450 and let's say I'm a 20th place guy, nobody would really care. Whereas at High Point, for example, my first moto of the season, I think I got 37th or something. It was awful. I was actually embarrassed, and it was insane how many people came through my pit just loving that I was even out there. 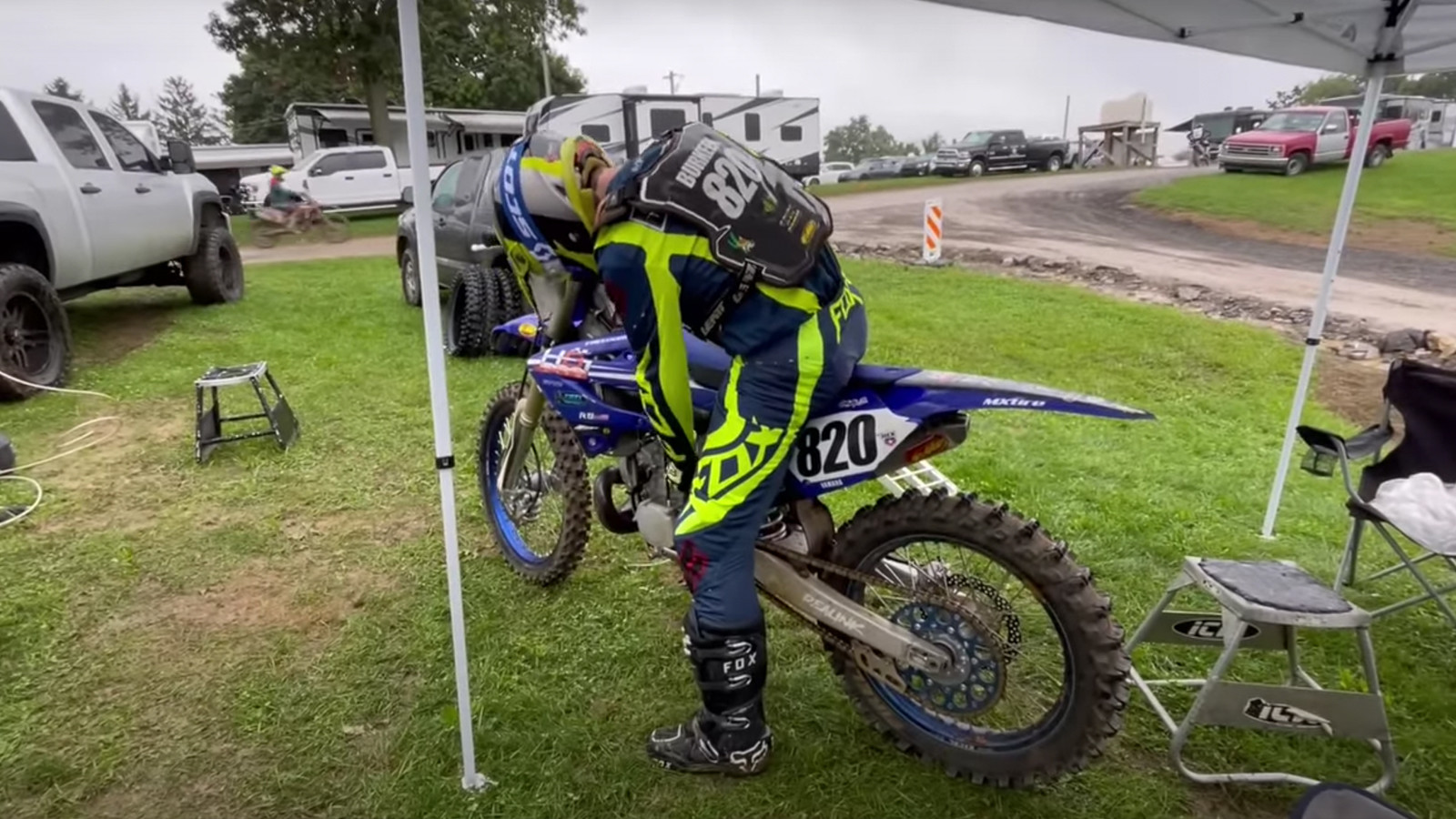 TJ: Where do you train during the week when you’re traveling to these nationals?

Matt: That's definitely one of the harder struggles. For me it's been about eight years since I've been doing any riding during the week. It didn't really faze me much. I was hoping to do a boot camp of sorts before the season. But then I jacked my shoulder up pretty bad a month before High Point. I barely even made it to the first round. To be honest with you guys, between High Point and Ironman, I practiced four times, and they were all between Washougal and Unadilla. I managed to link up with some of the ClubMX guys and just pretty much got my teeth kicked in for a couple of weeks, but it was really good for me. Other than that, I basically was just going to the gym every day and doing whatever I could off the bike. Mainly because I only had this one race bike to ride. I have another bike, but it's been a skeleton back here in my bike room for about three or four months because I keep having to steal parts off of it for this bike.

Vital MX: What are the chances of you hitting some supercross? Is that something that you could see happening?

View replies to: "If I Were to Race Nationals on the 450, Nobody Would Really Care" | Matt Burkeen on Racing the 2 Stroke 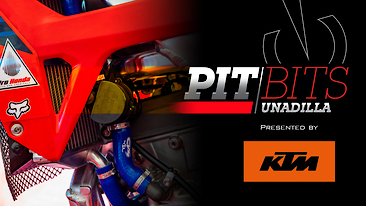 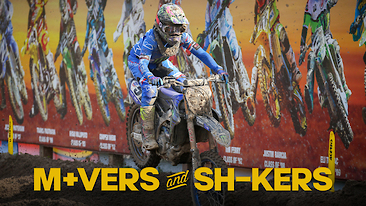 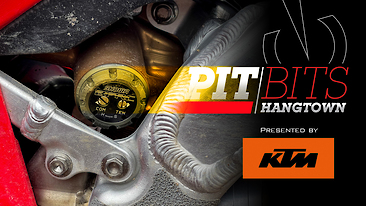 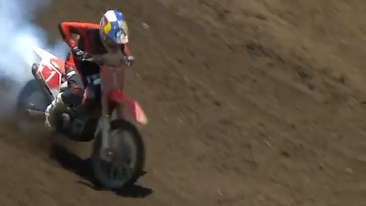 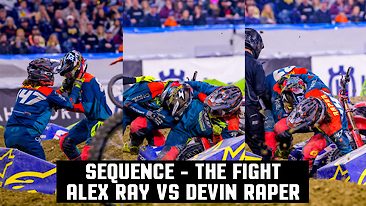