Where the red clay meets the pavement. 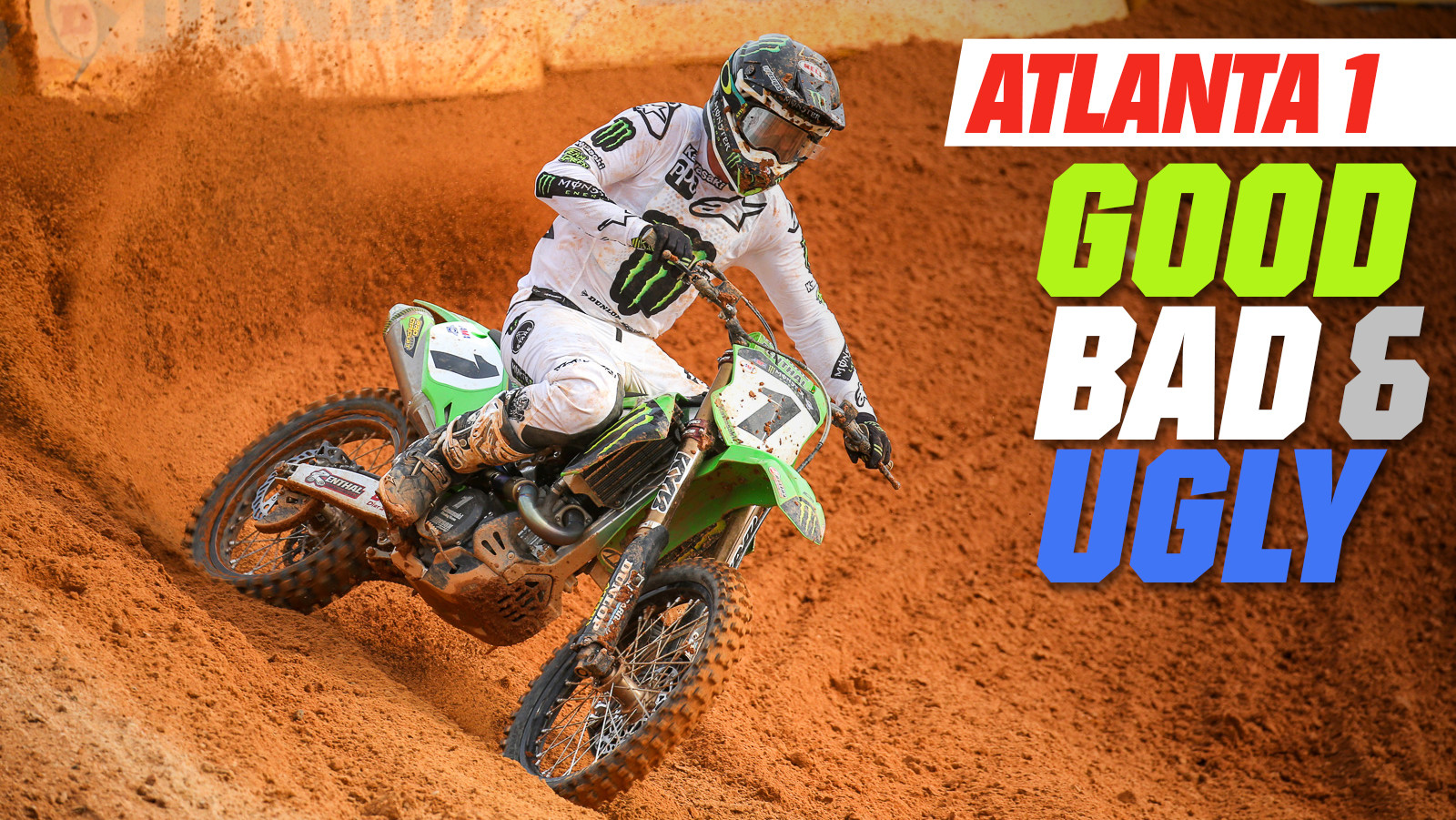 Thrasher's first win came out of nowhere, just like Seth Hammaker's first win did. He hadn't even finished in the top five yet, and I imagine a lot of folks hadn't even noticed him out there until Saturday. If you were keeping up with the lap times throughout the night, though, you probably saw that he put down some blazing fast laps in his heat race even though he didn't transfer due to an issue early on. He then took the LCQ win easily, and, well, we all know what happened during the Main Event. Did the outdoor-ish type track help, considering he's a rookie? I wouldn't be surprised, but it also looks like he found something during the break that has allowed him to take his riding to another level. Now, let's see if he can back it up at Atlanta 2 and 3. 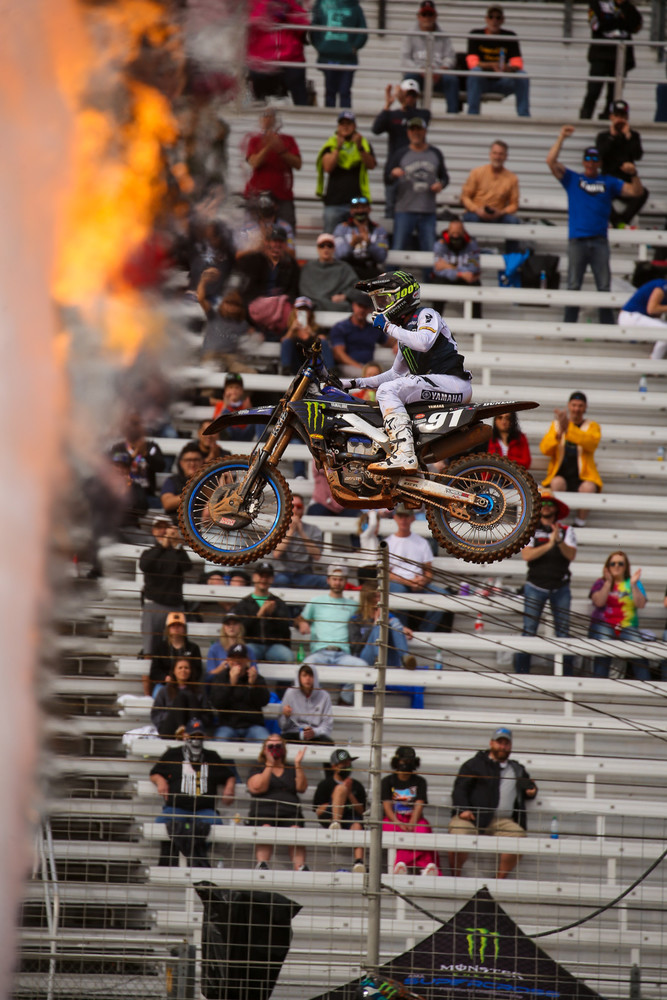 McAdoo has made huge strides when it comes to minimizing mistakes this season, but the couple he has made over the past handful of rounds have been costly. Early in the Main Event, he was in prime position to gain the crucial points on Justin Cooper to draw even if not take the red plate back, and then he threw it away in the whoops. To be honest, though, it felt like it was heading in that direction the entire night. This was the first race of the season where McAdoo looked desperate out there. He was riding way over his head at times, and I think everyone was left scratching their heads when he decided to go balls-out in his heat race and nearly injure himself while trying to pass Hunter Lawrence. I'm not sure if he had too much time to think about the championship during the break or if he just felt overly-confident on this track, but he needs to calm himself down some before Tuesday. The championship is still within reach, but he'll quickly take himself out of it if he keeps hitting the deck. 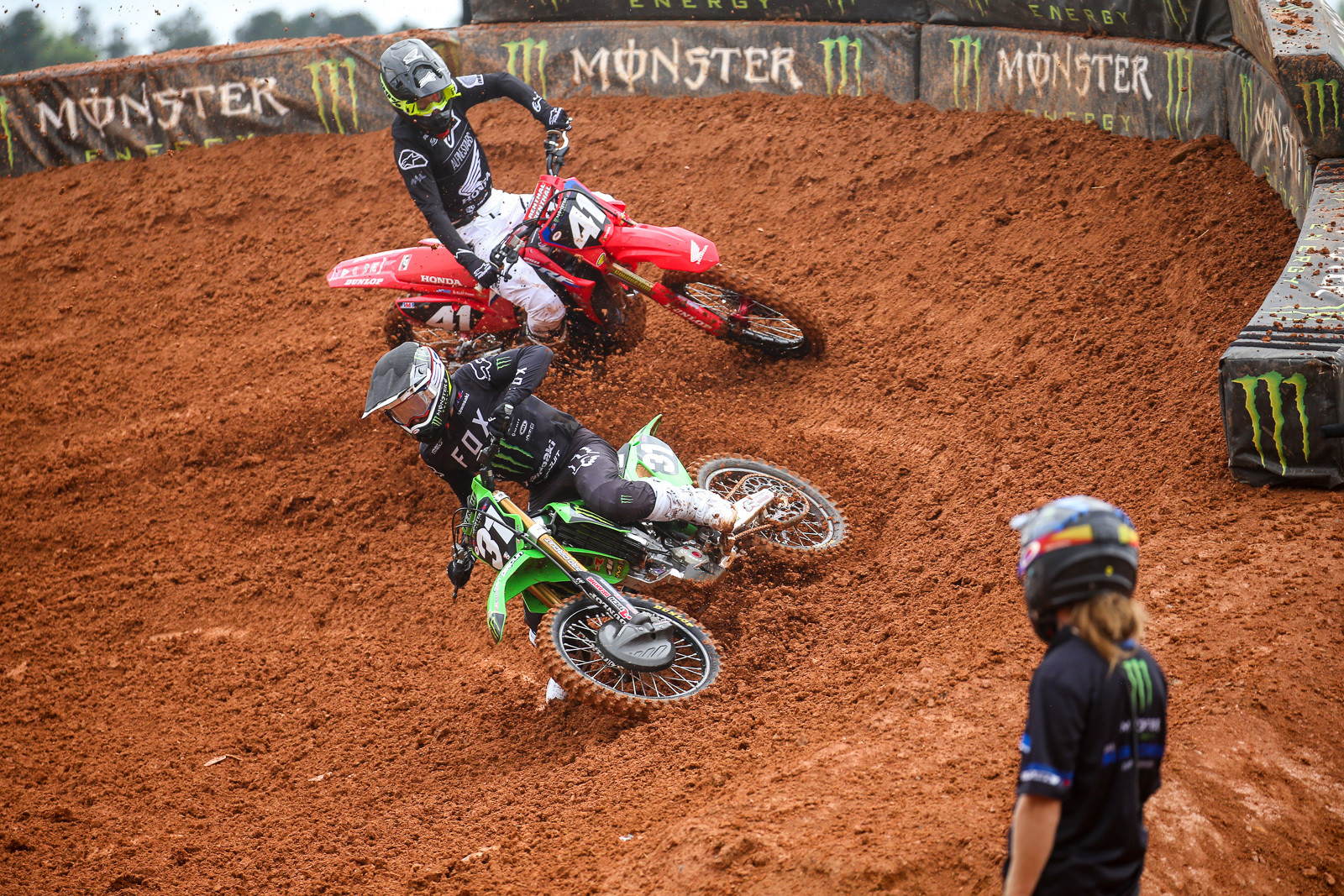 Marchbanks was set to make his second podium of the season until he lost it in the whoops and took about three hours to get his bike started back up. It'd be one thing if this happened during the first half of the race, but this happened with around one minute or so left in the main. He's going to think about this one for a long time, especially if he doesn't reach the podium again this season. 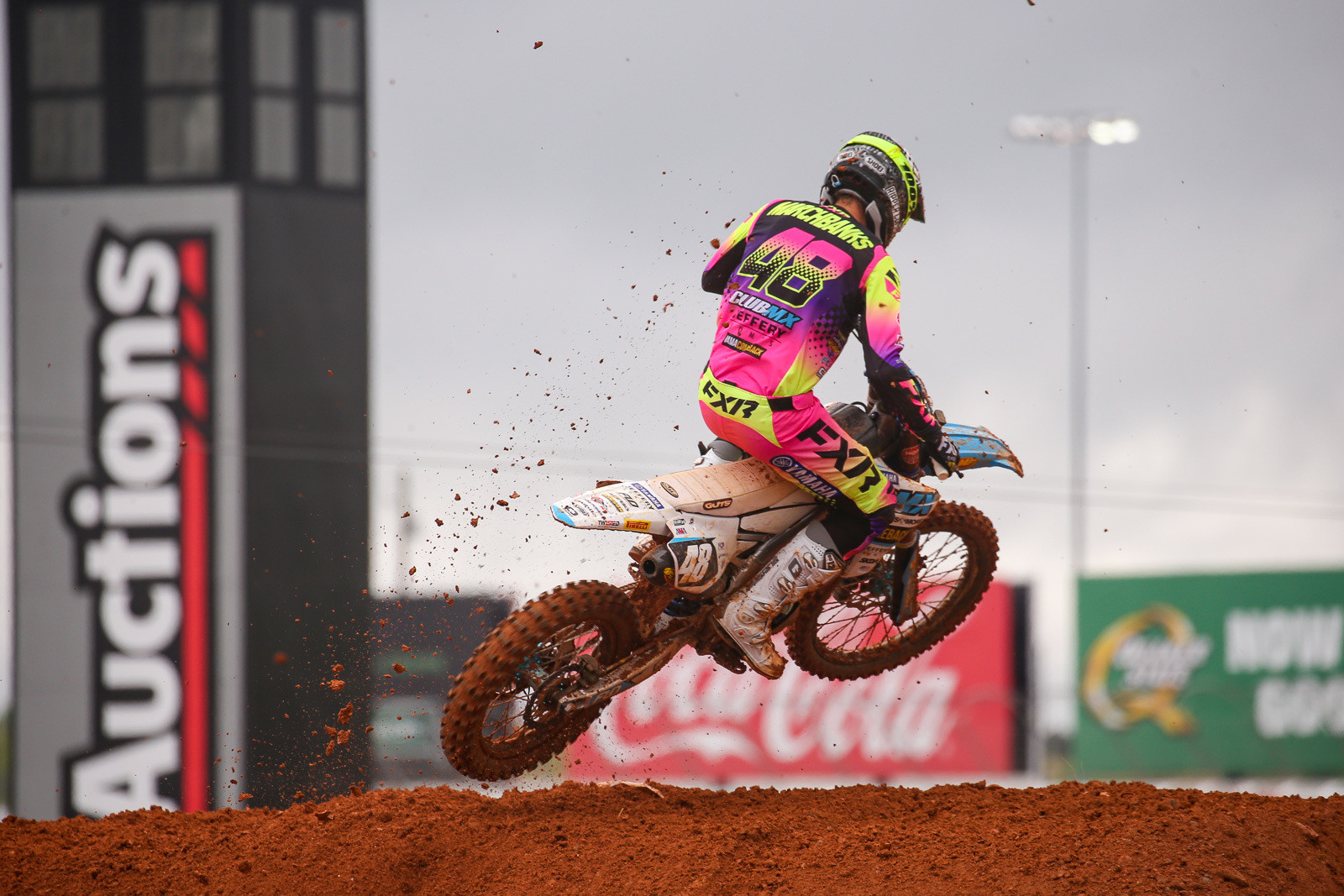 Failing to qualifying was bad enough for Frye, but I'd imagine that watching his fellow rookie teammate, Nate Thrasher, win the race made it sting a little bit more. Neither Frye nor Thrasher had set the world on fire this year as rookies heading into Atlanta, but Thrasher had outperformed Frye even before snagging his first win. Before the gate dropped on Saturday, Thrasher had results of 11-20-10-9-9 while Frye had results of 19-12-21-DNQ-10. It's always interesting to compare rookies that are on equal machinery, and I'm actually surprised that Thrasher has adapted to Supercross so much quicker than Frye. Atlanta 1 also marked Frye's second DNQ of the season, and I have to imagine that the management at Star Racing Yamaha has little tolerance for straight-up failing to make the Main Event....even as a rookie. I'm not saying that I think he's already on the hot seat for his 2022 ride, but I do hope he shows some improvement before the end of Supercross or has some crazy impressive rides once we head outside.

Tomac winning on this Atlanta track should have surprised absolutely no one considering it fits his style perfectly, but it's always fun to see him turn it on and hunt someone down from behind. However, the hot topic until Tuesday will be the incident that occurred right before the white flag between Chase Sexton and Cade Clason, which made Tomac's life a whole lot easier. The short and sweet version is that Clason was about to get lapped by Sexton and Clason held the inside line of the corner, which Sexton also committed to. This led to Sexton getting held up, which handed Tomac the lead. As with any situation like this, people immediately started bombarding Clason's social media and ripping him to shreds, because as with any sport, we have a lot of immature asshats in our fanbase. 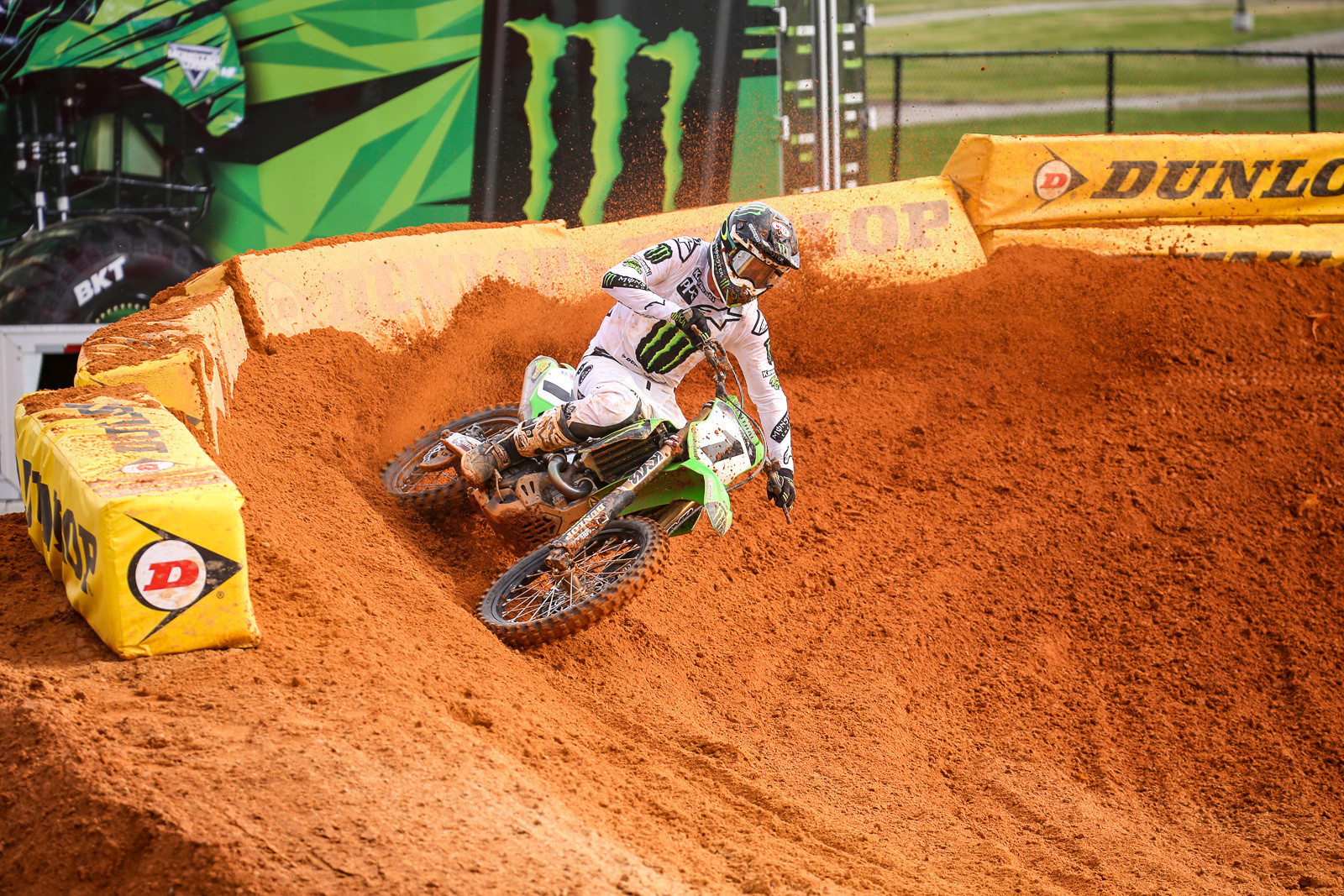 As for my opinion on the incident, though, I don't think we can put all of the blame on Clason. I didn't see a single blue flag waving as Clason entered that section, and to me, it seemed like he held the line that he'd committed to. Many people won't see it that way, and that's okay; that's just my take. Something that did intrigue me, though, was that Sexton thought that it was already the final lap when his incident with Clason happened, and that's why he rolled the jump after the finish. By that logic, wouldn't he have rolled the jump after the finish even if the incident with Clason didn't happen...which would have given Tomac the lead anyway? We'll never know, of course, but I was surprised to hear Sexton say that in the press conference. Anyway, the bottom line here is that even if you believe that Clason should have been aware of the leaders and think he's completely at fault, please don't post derogatory comments on his social media. Goodness, gracious. 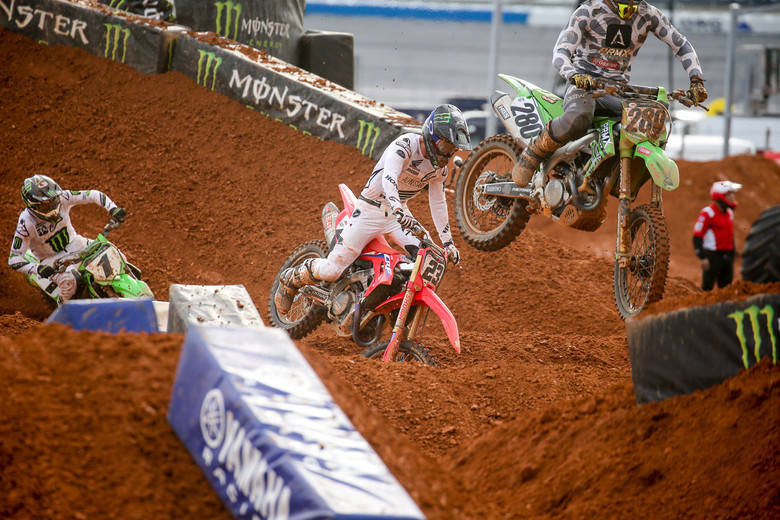 The Good Bonus: The Track

Man, I loved this track. The rain throughout the day made me think it'd be a mudder, but it was a dang good track by the time the Main Event rolled around, and it allowed for more passing than we've seen at most races this season. I think that Atlanta 2 and 3 have the potential to be even better, assuming that the track won't be quite as slick, but this was a great start to the residency. This week almost feels like a bit of a teaser for the outdoor season. 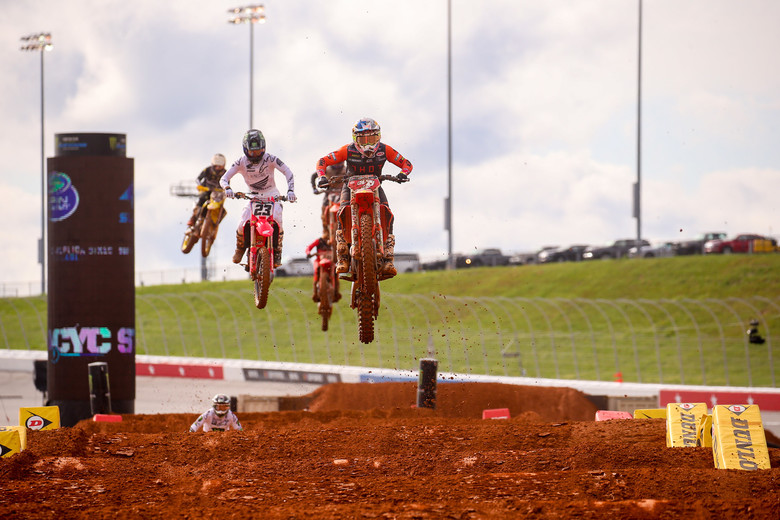 Plessinger's first half of the race? Fantastic. Plessinger's second half of the race? Oof, not so hot. I don't know if Aaron would have held onto the lead or not without the tip over, but I do think that it zapped him physically and took away any chance of a podium finish. He wasn't able to get back to the same pace after he got up and crossed the line nearly 25 seconds behind the leaders. However, this was still a good ride for Aaron. I'm glad that we've reached the point where a sixth place could be considered a "disappointment" for him, considering where he was a couple of years ago. It's just a matter of time until he claims his first win. 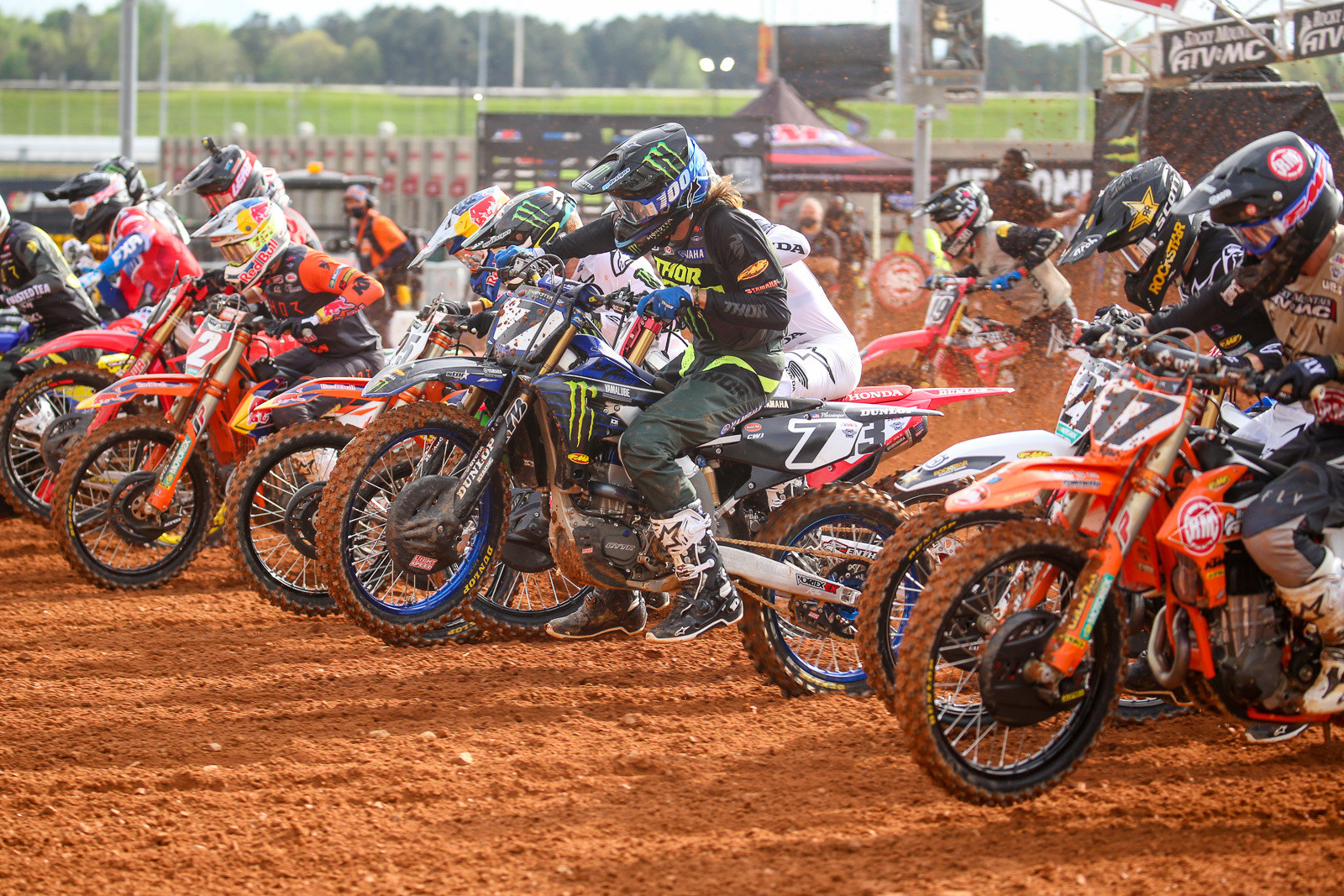 I mean, what more is there to say about Kenny at this point? He started in ninth place, and he finished in ninth place. I think that this championship is over and that Kenny has effectively checked out mentally. He may still snag a few podiums or win before the end of the season, but his chances of winning this title have officially flown out the window. At this point, I'm more curious if he'll be able to hold onto second place in the championship. 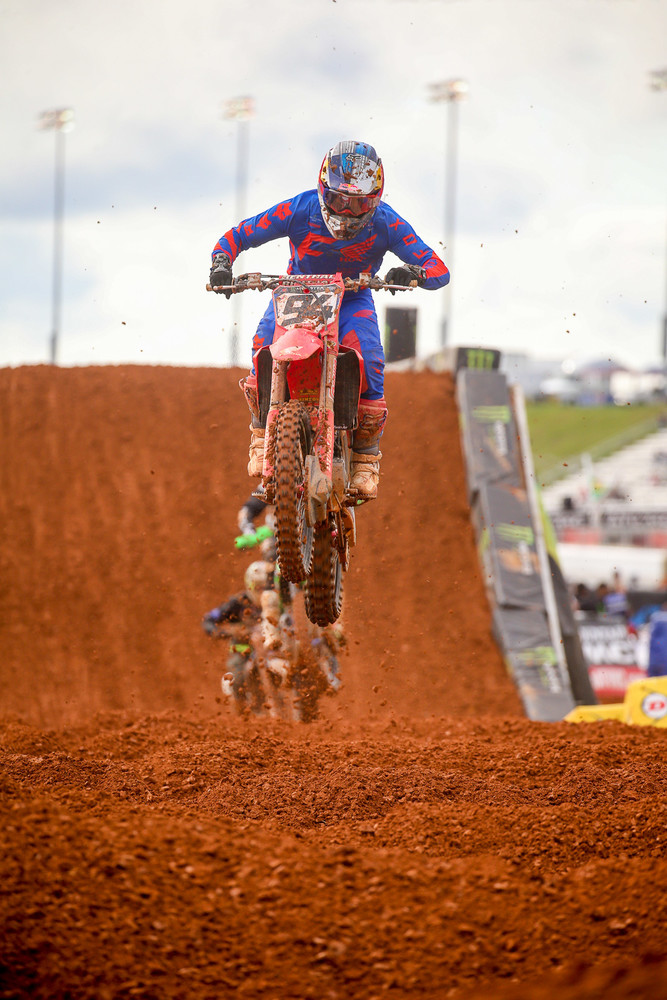 I don't believe they showed on the broadcast what happened to Deano in his heat race, but he had a nightmare of an LCQ in which he crashed multiple times and finished outside of a transfer spot. He now sits 13th in the standings, and as of now, this season has to be considered a disappointment for him. Everyone loves Deano, and he has some serious talent, but he still hasn't been able to turn that talent into meaningful results in the 450 class when he's healthy. He has four more chances to improve on his season-best finish of ninth place. 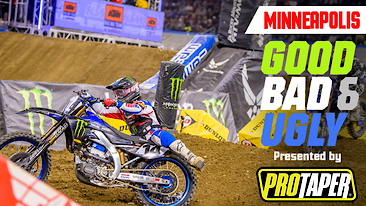 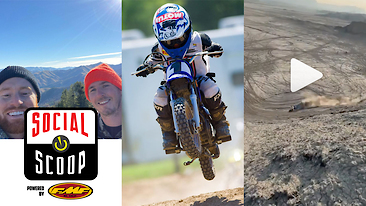